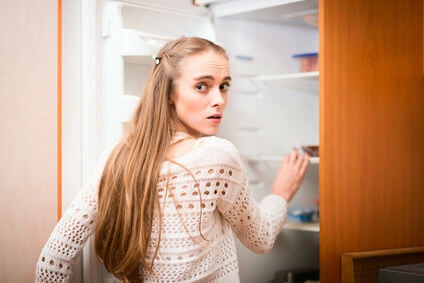 A slew of studies performed in the last few years show a strong connection between insufficient sleep and unhealthy food choices that may lead to obesity. Two recent experiments have used functional magnetic resonance imaging (fMRI) scans to explore how this connection manifests in the brain.

A 2013 study performed at UC Berkeley scanned the brains of 23 healthy volunteers, both after a good night of sleep, and again after a night of sleep deprivation, while viewing a series of 80 images depicting both healthy and unhealthy foods. During the scans, they were asked to rate how much they wished to eat each item. The volunteers received the one food that they craved the most at the end of the scan, as extra motivation.

Results showed that when the volunteers had not slept, they rated their desire for junk foods the highest. The corresponding brain scans showed that when the volunteers were sleep deprived, their frontal lobes exhibited decreased activity, and they also noted increased activity in brain areas that are linked to reward response.

Matthew Walker, the senior author of the study, wrote, “what we have discovered is that high-level brain regions required for complex judgments and decisions become blunted by lack of sleep, while more primal brain structures that control motivation and desire are amplified.

High-calorie foods also became significantly more desirable when participants were sleep-deprived. This combination of altered brain activity and decision-making may help explain why people who sleep less also tend to be overweight or obese.”

Results of this study displayed that when volunteers had four hours of sleep, viewing images of unhealthy food activated reward centers in the brain that were less active when they were well-rested.

These two studies add to a significant collection of previous research that has linked restricted sleep and sleep deprivation to eating larger-than-normal quantities of food, as well as to cravings for salty and sweet snacks. These findings illuminate the strong connection between our busy culture of late nights and early mornings, and the high quantities of junk food consumed.

The good news, however, is that getting a good night’s sleep could help quell a lot of cravings for unhealthy, processed foods. As Walker says, “getting enough sleep is one factor that can help promote weight control by priming the brain mechanisms governing appropriate food choices.”

The bottom line: if you’re trying to shed some pounds, or are having difficulty sticking to healthy foods, make going to bed at least an hour earlier a top priority.