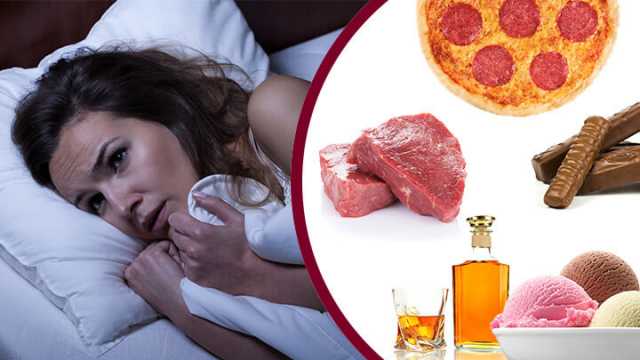 Have you ever experienced food-fueled nightmares? It’s so easy to lose precious sleep during the best of times. But throw in a little late-night noshing and it could turn la-la land into nightmare alley. Research suggests this is a real phenomenon, especially when starchy and sweet foods are involved. So, if you do enjoy a little bedtime snacking, then take notice of the foods you should definitely avoid.

Should you or shouldn’t you eat before bed?

Nightmares happen because of several reasons — stress, anxiety, irregular sleep, medications and mental health disorders. But, one of the simplest explanations usually involves food. That often leaves people wondering whether they should or shouldn’t eat before bed. Some experts say that it really doesn’t matter what time you eat, as long as you consume quality calories (that means no donuts). Others say that daily eating should end abruptly at 7:00 p.m. to promote weight loss.

What you choose to do is up to you, but if you experience frequent nightmares, research suggests that late-night snacking or the types of food you eat prior to bed could be the cause. Here are the foods best avoided before bedtime.

That seemingly innocent bowl of ice cream before bed just might scare you to death! Okay, not really, but it is loaded with fat and sugar  — and that’s pretty scary in itself. Since your body really doesn’t have a chance to burn any of that fat or sugar before bed, all of those icy carbs are going to pump your body full of energy right before you hit the hay. That could send conflicting messages to your brain, provoking nightmares. And you know else that sugar will do? Turn to fat. So, there’s no happy ending to that nightmare.

That nightcap before heading to bed might ease you into a deep slumber, but it will also rob you of a good night’s sleep, according to the Cleveland Clinic. Even though alcohol is a sedative, the effects wear off during the night. Deep sleep decreases and REM, or dreaming, sleep increases. When alcohol is in your system, it can cause vivid dreams and nightmares to become more intense, realistic and scary. With alcohol, there’s also a chance you’ll act out your dreams in your sleep, sleepwalk or experience sleep terrors.

Eating before bed can cause the body’s metabolism to shift gears. In turn, your brain activity will increase. Add a caffeinated food or beverage into the mix, like dark chocolate, a latte or caffeinated tea, and that increased brain activity might signal nightmares. Why not opt instead for a steaming cup of non-caffeinated herbal tea?

You may have heard that spicy foods cause nightmares, or you have experienced it firsthand. Spicy foods are often linked to nightmares because they require more effort from the body to digest them. An Australian study published in the International Journal of Psychophysiology fed subjects Tabasco sauce and mustard at dinner. The participants (six young and healthy males) experienced markedly disturbed sleep. Spicy food elevates the body’s temperature and could therefore disturb brain activity and cause nightmares.

Sugar before bed is really not a good idea, for so many reasons — rotting teeth, weight gain and, of course, nightmares. A study published in Frontiers in Psychology tested 396 students to see if there was a link between diet and dreams. Researchers found that 31 percent of participants reported bizarre and disturbing dreams after eating cookies and cake.

If you’ve ever thought about indulging in a little leftover pasta and garlic bread late into the evening, maybe you should rethink that. Starchy pasta and bread convert to glucose in the body and therefore have the same effects as sugary foods. And surgery foods equate to nightmares.

A Japanese study published in the journal Plos One examined the sleep quality of 1,848 men and women aged 20 and 60 years after they ate certain carbs. Researchers found that pasta along with bread reduced sleep quality. But interestingly, rice actually improved sleep quality. So, if you’re hankering for a late-night carb, how about a bowl of rice?

How to avoid nightmares

Unfortunately, nightmares are a part of life. But thankfully, the older you get the fewer nightmares you experience. So, while some foods may link to vivid or scary dreams, frequent nightmares could also be the result of an underlying sleep disorder like sleep apnea, restless leg syndrome or insomnia, according to researchers at  Washington University Sleep Medicine Center at Barnes-Jewish Hospital.

In addition to seeing your doctor about nightmares, avoid eating large meals before going to bed. And give yourself a few hours between eating and sleep to allow your body to digest the food without affecting your dreams. Late-night eating will boost your body’s metabolism and temperature, which ultimately leads to more brain activity during REM sleep. And more brain activity during REM sleep can lead to poor sleep quality.

If you must eat before bed, eat something light, like fresh popcorn. Not only will you consume fewer calories, you’ll also consume less sugar and fat, both of which can lead to nightmares. A light snack before bed should give your body a chance to digest and rest.