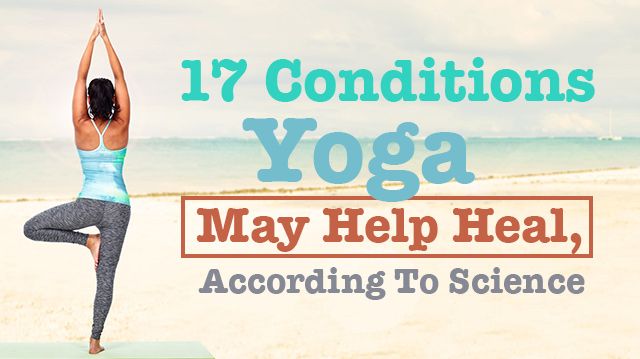 Yoga is well known for its ability to boost fitness levels and flexibility, decrease stress, and support feelings of calm and well-being. However, more and more studies are showing that yoga doesn’t only increase quality of life in healthy individuals; it may also play a role in treating and reducing the symptoms of many difficult-to-treat health conditions and diseases. Here are 17 conditions yoga may be particularly beneficial for, according to scientific studies.

Many studies, including this one we covered, suggest that practicing yoga can benefit those with diabetes. How? Yoga has been shown to have positive effects on blood sugar levels, weight, heart rate, blood pressure, cholesterol levels, as well as free radicals in the body, all of which contribute to diabetes.

A 2013 study performed at the University of Pennsylvania found that patients with high blood pressure who practiced yoga experienced a greater drop in blood pressure than those who underwent a diet/weight reduction program. The researchers believed that yoga lowered blood pressure successfully because of its emphasis on relaxation and mindfulness.

For the millions of people who suffer from anxiety or depression, studies show that yoga can be an important part of an effective treatment plan. According to Harvard Health, yoga can help heal these conditions by taming physiological responses to stress, including raised heart rate and blood pressure. Studies also suggest that yoga can provide a mood boost and lead to a higher quality of life.

Although only a few studies have been done on yoga’s effect on IBS, the results so far are encouraging. A 2011 study, for example, found that both pain intensity and frequency reduced in children with IBS after 10 yoga lessons. For more on the way that yoga can benefit your digestive tract, check out these 5 yoga poses that support healthier digestion.

A 2010 study found that a yoga practice that included a warm-up, postures, deep breathing exercises, and 10 minutes of deep relaxation decreased the number of asthma attacks experienced by adults with asthma. The researchers thought that practicing yoga might improve both psychological and physical triggers of asthma attacks.

Multiple sclerosis (MS) is an incurable, chronic disease that attacks the central nervous system and can eventually lead to paralysis or blindness. However, studies suggest that practicing yoga may relieve or reduce the many challenging symptoms caused by this condition. A 2015 study found that “yoga’s focus on breath, movement, and stretching may have therapeutic benefits for patients with MS and improve outcomes such as self-efficacy, mental health, and quality of life” and that “yoga is a promising method of symptom management for patients with MS.” Especially with MS, it’s important to find a yoga teacher who is specifically trained in this area to guide you through the postures safely.

A 2008 study found that patients who participated in one week of intensive yoga experienced less pain, reduced disability, and improved spinal flexibility. Many other studies have also found yoga to positively benefit chronic back pain, and it’s thought to be a safe option for this condition when done carefully and under the guidance of an experienced instructor. Here’s more about how yoga can prevent and heal back pain.

Although some findings on yoga’s benefits for arthritis are mixed, arthritis.org reports that “recent scientific studies of people with various types of arthritis show that regular yoga practice can help reduce joint pain, improve joint flexibility and function and lower stress and tension to promote better sleep.” This may, at least partially, be due to yoga’s ability to fight inflammation.

Not only can certain yoga postures help you fall asleep faster and sleep deeper, but a regular yoga practice also helps people to adopt healthier habits and behaviors that lead to more regular and restful sleep. Multiple studies support this idea, including a 2004 study which found practicing yoga before bedtime improved both sleep time and sleep quality in patients with chronic insomnia.

Although only a handful of studies have been performed on yoga’s ability to help beat addiction, studies done so far on patients with alcohol and nicotine addictions have had promising results. There are also many anecdotal accounts of yoga being an integral part of people’s journey to healing from addiction. A 2009 documentary called Addiction, Recovery and Yoga has chronicled several of these journeys, and the role that yoga played in them.

The beneficial effects of yoga for people with autism, especially children, are becoming more and more well documented. A 2012 study, for example, followed students with autism who practiced yoga before school each morning for 16 weeks. The yoga practice included deep breathing, postures, tensing and relaxing muscles, and ended with singing. After the 16 weeks, teachers rated the student yogis as better behaved compared to the students who hadn’t practiced yoga, and the researchers concluded that the yoga routine had “a significant impact on key classroom behaviors among children with ASD [autism spectrum disorder].”

Attention-deficit/hyperactivity disorder (ADHD) is another behavioral disorder that yoga may help treat. A 2012 study, for example, found that a year-long intervention including yoga postures, meditation, and play therapy helped students with ADHD perform better in school. After the intervention, 92 percent of students had significant improvement according to parent ratings, and 46 percent according to teacher ratings.

Multiple studies have shown that yoga may help practitioners with eating disorders by encouraging body acceptance and mindful eating, and decreasing the habit of self-objectification. However, some experts are concerned that yoga classes may be encouraging, rather than healing, eating disorders. According to the Yoga Journal, “Treatment experts worry that patients turn to yoga to burn calories, suppress hunger, or numb emotional pain, but under the guise of a devoted practice and clean eating.” This is a dynamic that researchers will have to continue to examine in future studies in order to make sure that yoga is practiced in a way that reduces rather than boosts disordered eating habits.

Many studies have examined the effects of yoga on patients with epilepsy, most with positive results in terms of both reducing seizures and reducing patients’ anxiety about having seizures. Because seizures in epileptic individuals and anxiety about potential seizures are closely tied to stress, some researchers believe that yoga’s ability to reduce stress may be behind the improvements seen by patients.

Although no study (so far) has demonstrated that yoga can have a direct effect on improving or reversing hypothyroidism, some studies do suggest that daily yoga sessions may improve the quality of life of hypothyroid patients as well as help them manage disease-related symptoms. Yoga therapists, on the other hand, have been treating thyroid conditions with yoga for a long time, and specifically recommend poses that require flexion and extension of the neck.

As these studies show, yoga can be a beneficial and healthy practice for almost anyone. However, if you have a diagnosed health condition such as the ones above, it’s important to speak to a health practitioner before you start a yoga practice and to work with a certified yoga teacher or therapist who is knowledgeable about the condition you have.