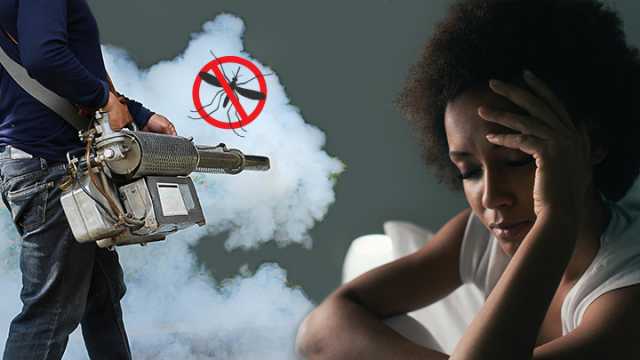 When we think of things which may disrupt our sleep, many come to mind. Alarm clocks set too early? Definitely. A middle-of-the-night emergency text? Of course. Screaming children and rambunctious pets? For sure. Thunderstorms, eating something not-so-healthy the night before and too much evening coffee? These are also a given.

But what about exposure to insecticides? This may seem downright counterintuitive. Most of us know that insecticides are made of toxic chemicals, but how could they possibly affect our sleep? Well, new research from the University of Buffalo has found a connection.

To study these two insecticides, researchers used predictive computational modeling, along with in vitro cell experiments. Using the University of Buffalo database, which contains millions of chemicals with reported toxicity levels, the researchers found some that interacted with melatonin. That’s the hormone responsible for governing sleep-wake cycles. In vitro experiments included cells which expressed melatonin receptors. These receptors were found to interact with the carbamate insecticides, leading to the hampered functioning of the receptor.

“Altogether, our data points to a potentially new mechanism through which carbamate insecticides carbaryl and carbofuran could impact human health by altering the homeostatic balance of key regulatory processes by directly binding to melatonin receptors.”

The implications of disrupted sleep cycles

Not only can poor quality sleep make you feel irritated, groggy, unfocused and unproductive, it can also pave the way for metabolic illnesses. According to study co-author Marina Popovska-Gorevski:

“We found that both insecticides are structurally similar to melatonin and that both showed an affinity for the melatonin MT2 receptors that can potentially affect glucose homeostasis and insulin secretion. That means that exposure to them could put people at higher risk for diabetes and also affect sleeping patterns.”

“By directly interacting with melatonin receptors in the brain and peripheral tissues, environmental chemicals, such as carbaryl, may disrupt key physiological processes leading to misaligned circadian rhythms, sleep patterns and altered metabolic functions, increasing the risk for chronic diseases such as diabetes and metabolic disorders.”

“No one was thinking that the melatonin system was affected by these compounds, but that’s what our research shows.”

A good reason to choose organic

As insecticides are often liberally sprayed on non-organic food crops in the United States and other nations which export food around the world, this study gives us a good reason to go organic and never look back, especially when it comes to produce. It may be a bit pricier to choose organic fruits, vegetables and legumes. But, you’ll be saving yourself from insecticide exposure which may do significant harm, especially if it bioaccumulates.

If you’re on a budget and you have to pick and choose, check out this article on five foods to always buy organic.

Other dangers of poor sleep

Now that you’re convinced to buy organic food and avoid insecticides that could interrupt your sleep, here are some more reasons to make sure you’re getting enough zzz’s every night. Along with a higher risk of diabetes and metabolic disorders, not getting enough sleep on a chronic basis may also lead to:

Ways to protect your sleep quality

The quality of your sleep is crucially important to your overall health, so it pays to protect it. The following are a few ways to make sure you’re sleeping your soundest, every night.