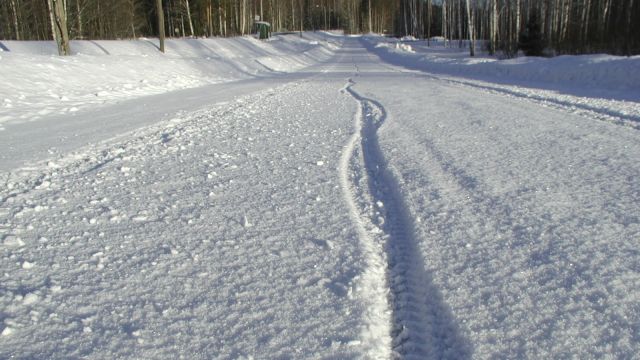 When Buffalo, New York development officials asked for some ideas about a new 33,000 square-foot skating rink they were building to revitalize the waterfront, Lisa Florczak put her thinking cap on, and thought of a new way to get around on the ice.

Florzak’s family owns Water Bikes of Buffalo, which rents out pontoon bikes in the warmer months. She wanted to think of a unique way to build on the bike idea for the frozen Buffalo river. “I thought: ‘What a perfect opportunity to go from water biking to ice biking,'” she said.

It took a bit for her to perfect what type of blade to use on the bike. The shaper blades, like that on ice skates, were too fast, as were the flat bottom like skis. The end result was replacing the front wheel with a dull blade.

The back tire of the ice bike sits inside a stainless steel frame to give the bike support, and the entire bike rests on a rectangular frame, so there is no need to balance yourself. The ice bike brakes by pedaling backwards.

Dave Wolf, who has Parkinson’s disease, tried the bike and thought it was “pretty neat”. “They take a little getting used to. No sharp turns. But once you get used to it, it’s a pretty nice ride.” He likes the fact that he can get out in the winter to get some kind of exercise.

The bike also gives those who don’t ice skate the opportunity to get out on the ice and enjoy the cold weather. If you’re wondering how much this adventure costs, the first year, Water Bikes of Buffalo had 15 bikes on the ice, and were charging $10 for a half hour of riding.

Florzak is hoping that other cold weather cities in Wyoming, Michigan, Minnesota and Canada will look into purchasing her bikes. She is also planning on providing kits for people who would like to convert their own bikes, for $1,500.

She is also surprised that her ice bike is a success. “I thought I might end up being the laughingstock of the city.” Come to find out, she was not. The day that Ice at Canalside (the name of the new ice rink) opened up, people were more than willing to venture out in the cold to try her new invention.

The bikes have been named the Ice Bikes of Buffalo, in honor of their city. Florzak has had the name laser-cut into the running boards. Also, with Buffalo’s economy struggles, she wanted to keep the production local.

Florczak stated, “It’s been an incredible ride so far.”