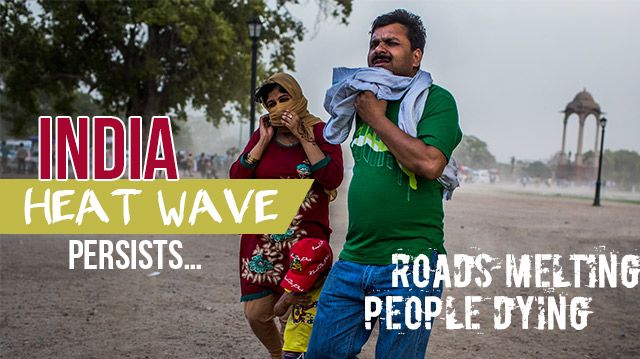 The effects of record temperatures in India from climate change, compounded by poverty and lack of infrastructure, have been horrific. The city of Phalodi broke India’s all-time record for the hottest day, at 51 degrees Celsius, during a heatwave that has ravaged the country for weeks.

India is waiting for relief from the rainy season, which looks to be 11 days late. After a two-year drought punctuated by weak rains, the arrival of the monsoon would benefit farmers and overheated villagers who have little or no access to drinking water.

In many regions of India, schools have been forced to close and cooking has been banned due to fire risk. Rivers, lakes and dams have dried up in parts of the western states of Rajasthan, Maharashtra, and Gujarat. There have been power cuts on surging demand and television channels in Gujarat showed residents struggling to cross a hot melted road as their shoes became stuck. One person lost a flip-flop in the scalding trip from curb to curb.

The city of Latur is receiving water from a train that comes daily, and the Times of India reported a case where a camel left in the heat all day bit its owner’s head off.

At least 96 million farmers have seen their crops suffer due to the recent heat, according to census data. Crops have withered in 13 states, forcing farmers to abandon their land and move to the cities. Hundreds of farmers have committed suicide as well. The Indian Express reported that more than 400 farmers in the Marathwada region of Maharashtra alone had taken their own lives so far this year. In Telangana, the Hindustan Times reported, 315 people have died heat-related deaths.

Indian doctors say people coming into hospitals with heat exhaustion are those who spend more time outside — not good news for workers with no choice, such as farmers and laborers. Initial symptoms include dry mouth and tongue, later followed by dizziness and vomiting, passing out and other dehydration-related symptoms.

“This is the first effect of climate change, I must say. Because of it, there is no water, there is no agricultural development, and that is why farmers commit suicide,” Maharashtra’s Rural Development and Water Conservation Minister Pankaja Munde told the press in India late last year.

A similar heat wave in India then that reached 47 degrees Celsius, killed around 2,500.

The heatwave in India comes as NATO found that April broke a range of global temperature records, and scientists fear that the planet is heating up too quickly for the Paris goals to be realistic.

But it is poor countries which, despite contributing the least to pollution and climate change, are the first in the line of fire. According to the World Bank, global warming will send an additional 100 million people into extreme poverty (living on $1.90 per day, according to the new standard) by 2030. Close to half of those people will be living in India.

People who are marginalized — socially, economically, culturally, politically, or otherwise — are especially vulnerable to climate change, according to the UN climate panel. A key impact of rising temperatures is a reduction in crop yields leading to higher food prices. Poor countries in the warmer, drier parts of the planet will feel the loss of income before others.

The Germanwatch Climate Risk Index, which ranks countries according to their extreme weather risks, found that all countries in the top ten of their index are developing countries, led by Bangladesh, Myanmar, and Honduras. The Global Economic Symposium report stated that 95 percent of fatalities from natural disasters in the last 25 years occurred in developing countries.

If climate change has its victims, it’s worth asking if it has its guilty parties too? Presidents such as Evo Morales of Bolivia and Rafael Correa of Ecuador have raised the idea of a climate tribunal, making punishable crimes committed against the planet. Other developing-nation presidents, especially those of small and vulnerable Pacific and Caribbean islands, have suggested that developed countries need to contribute more money to combating climate change, as they hold more responsibility.

Who is responsible, and how can they be held accountable?