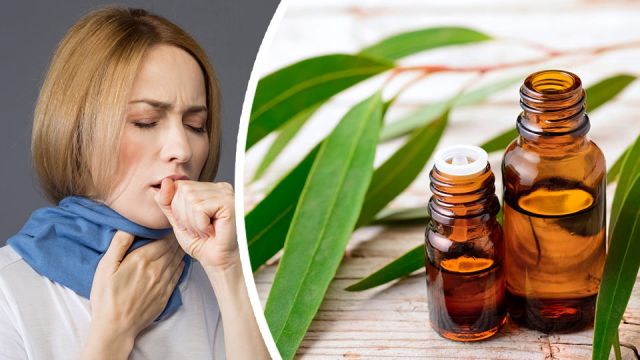 When the all-too-familiar symptoms of the common cold or, even worse, the onset of the flu begin to take hold, most people reach for over-the-counter synthetic medicines to treat the fatigue, body-aches and fever that undoubtedly come with being sick. And while there are some occasions that do warrant the use of Western medicine, for many of us, there are better, more holistic approaches that should be considered first.

This is especially true when the symptoms of being sick have subsided and you’re left with one pesky reminder of the days you spent in bed: a cough. You know the one — it sounds way worse than it is, it rears its ugly head during the most inconvenient of times (like a work meeting or in the middle of the night) and no matter what you do, it seems like you just can’t beat it for good. For some, this cough can last for days, if not weeks, post-illness. It can impact the body’s ability to rest, breathe and interact with others.

Enter essential oils, which are highly-concentrated oils derived from plants that can do everything from aid in weight loss to fight chronic pain. Essential oils are a safe and effective way to naturally heal the body from illness and prevent symptoms from returning. Some essential oils can also directly impact the body’s respiratory system and eliminate a lingering cough once and for all.

Here are some of the best essential oils for fighting a cough.

Eucalyptus oil, which is derived from a native Australian plant, has been praised since ancient times for its ability to treat wounds, cure infections and reduce fevers. It also does wonders as an expectorant which explains why it is found in over-the-counter goods such as cough drops, topical pain relievers and sore throat sprays.

Perhaps the most common product is Vicks VapoRub which lists eucalyptus oil as one of its active ingredients. Interestingly enough, while Vicks VapoRub directs users to apply the product to one’s chest, if you’re using pure eucalyptus oil, the most effective way to use it is by applying to the soles of the feet. This will help the product to work more efficiently due to the large pores found on the bottom of the foot and will help to prevent any irritation to sensitive skin.

Another way to use eucalyptus oil to help cure a cough and cold is by inhaling its vapor. Simply boil some water on the stove and add a few drops of the oil and remove from the heat. Carefully place a towel over one’s head and breathe in the eucalyptus-infused vapors. This will help open up the breathing passageways in the nose and the antibacterial properties from the oil will help fight infections.

The first thought most people have of cinnamon is as an exotic spice that can be added to baked goods and teas. However, few realize it has been used as an alternative form of medicine for years, aiding in everything from reducing arthritis pain to improving blood pressure.

Cinnamon boasts a staggering number of anti-inflammatory properties, which may explain why ancient Romans used cinnamon to fight digestive and respiratory issues. Coupled with its antimicrobial properties, cinnamon essential oil can be particularly beneficial when used to treat upper respiratory infections such as bronchitis. It is best inhaled as a vapor (try mixing a few drops into boiling water and breathing in the steam) which works to fight the pathogens in the lungs while soothing a cough.

The healing potential of ginger is seemingly endless — especially when used for reducing inflammation and detoxing. The first known people to use the ginger plant hailed from ancient India and China where it was incorporated into popular cuisine before moving on to the medicine cabinet.

Ginger essential oil is extracted from the root of a flowering plant found in the Zingiberaceae family. Ginger is an incredibly powerful and warming plant with high concentrations of sesquiterpenes, a chemical responsible for it being anti-inflammatory, antibacterial and antispasmodic.

In oil form, it has the most potent concentration of gingerol, which are its main chemical compounds This explains why it is so commonly used to aid in digestive issues such as cramps, gas and bloating. It should also be considered for respiratory issues such as asthma and bronchitis.

The easiest way to use it is by inhaling a few drops straight from the bottle or mixing with hot water for a vapor. One can also make a hot tea using a few drops of food grade essential oil mixed into a cup of warm water. For an even stronger, superfood-packed cocktail, try mixing in some freshly squeezed lemon juice and raw honey.

While the world of essential oils is vast and full of numerous ways to naturally boost your immune system and heal from the inside out, these are a few of our favorites for eliminating a cough and preventing it from returning.

What are some of your favorite essential oils? Tell us in the comments!