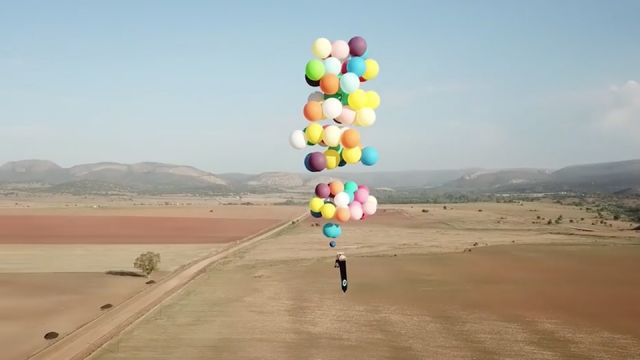 An English man, inspired by Pixar’s famous movie “Up,” strapped himself to a lawn chair and flew it with balloons over South Africa.

This video, posted by the group The Adventurists, says their mission is “fighting to make the world less boring.”

Prior to lift-off, Morgan spent two entire days inflating the 100 balloons. Then, on Monday, October 23, he strapped himself into the lawn chair with his needed safety supplies and waved goodbye to his teammates until his landing.

Morgan called the experience “magical” after failing several times in the neighboring country of Botswana weeks before. “The problem was finding a good weather window and it was difficult to protect the balloons as they kept bursting,” Morgan said.

Pictures from the expedition:

A man inspired by the movie “UP” flew across South Africa using only balloons. pics from @TheAdventurists pic.twitter.com/xwBLcXa7qp

Morgan admitted that he was feeling “somewhere between terrified and elated” as he rose into the air, risking his entire life to the support of helium balloons.

Here is another video recapping the trip:

Once the balloons reached the inversion layer of the atmosphere, where temperature rises, he recalls accelerating extremely quickly. “I had to keep my cool and start gradually cutting the balloons,” said Morgan.

In Pixar’s 2009 animated movie “Up,” a man straps balloons to his house:

Morgan says he planned the stunt for months and had to plan for potentially dangerous winds and balloon issues. In the future, Morgan hopes to launch a three-day long distance race flying with the balloons.

As a disclaimer, The Adventurists’ website claims that the things they post are “extremely dangerous” and everyone cannot overestimate the risks involved in taking part in these adventures.

The Adventurists event manager Matthew Dickens confessed his doubts in Morgan. “We weren’t even sure Tom would come back alive. We didn’t think he was going to manage it, but yeah, he got there in the end.”

Here is a video of him while in the air:

Morgan believes Botswana was the perfect location for his bold journey. “There’s lots of open space. And it’s in the middle of a continent, so when the wind blows, we won’t land in the sea and die.”

Similar attempts to fly using balloons have been made by others, most notably a Canadian man who was arrested in 2015 for becoming a danger to society. His attempt was far less planned and poorly executed compared to Morgan’s. You can check that story out here.