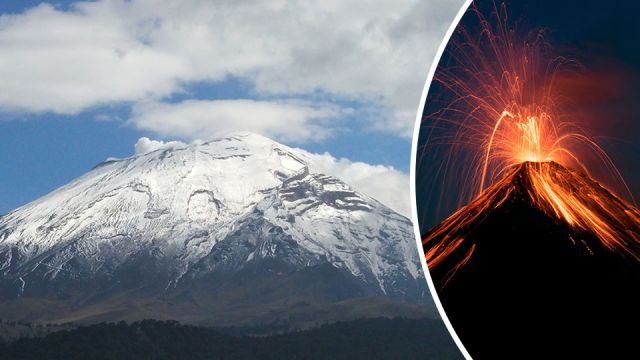 As if a deadly earthquake wasn’t enough, Mexican authorities now fear one of the country’s most active volcanoes could be about to blow.

Overnight Wednesday, the Popocatepetl volcano spewed ash and vapor, with the Mexican National Center for Disaster Prevention (CENAPRED) reporting that at least “six volcano-tectonic earthquakes with magnitudes between 1.2 and 1.8 were recorded.”

“In the last 24 hours, through the Popocatepetl volcano monitoring systems, 299 low-intensity emissions were identified, in addition to one explosion,” CENAPRED said in a statement. Overnight, volcano watchers also reported Popocatepetl’s crater was glowing, with emissions continuing into Wednesday.

“Since this morning [Wednesday] and until the moment of this report, the volcano has been observed with a weak emission of water vapor and gas,” CENAPRED said. A live stream of the current state of the volcano can be seen below:

Authorities have issued an alert for the surrounding regions, and warned against approaching the volcano over fears volcanic material could be blasted out of the crater.

The renewed volcanic activity began around the same time a 7.1 magnitude earthquake hit central Mexico on Tuesday afternoon. More than 200 people have been confirmed dead, though authorities warn the death toll is expected to rise as rescue workers fight their way through the rubble.

“The priority at this moment is to keep rescuing people who are still trapped and to give medical attention to the injured people,” President Enrique Pena Nieto said Tuesday night.

Among the dead were 15 worshipers who were crushed when a church near the slopes of  Popocatepetl collapsed, according to local authorities. There are no signs the collapse was directly linked to volcanic activity.

In the nearby village of Cholula, locals fear the disaster might not be over. Under the shadow of Popocatepetl, the village witnessed the volcano explode when the earthquake hit.

As the earthquake struck, Popocatepetl exploded into a pillar of fumes and debris, sparking fears another natural disaster could be imminent. “Look at this insanity, the volcano is erupting!” a narrator could be heard exclaiming in this viral video of the incident.

As one of Mexico’s most active volcanoes, Popocatepetl has repeatedly shown its strength in recent years. In March 2016, the volcano shocked onlookers with a 2000-meter high column of ash, prompting authorities to establish a 12-kilometer exclusion zone around the peak. Ash and volcanic soot covered the surrounding landscape, including smothering the streets of Cholula and the nearby city of Puebla.

In another major bout of activity in July 2013, the volcano erupted several times, forcing the cancellation of around 40 flights from two airports. However, the largest eruption in at least 1,000 years took place in 2000, when tens of thousands of residents evacuated surrounding areas. A larger eruption over 2,000 years ago may have also sparked a mass migration.

While the volcano may be more bluster than brawn, the latest earthquake has already rattled the region around the peak, including Cholula. At least three people were injured during Tuesday’s quake, which damaged an iconic church near the village center. In footage captured by one passerby, a massive chunk of the church could be seen crashing down on the plaza below.

Nationwide, at least 217 people have been confirmed dead, including 71 in Morelos state, and 43 in Puebla state. Both states share Popocatepetl and a surrounding national park.

Elsewhere, 86 deaths have been confirmed in the nation’s capital. The latest confirmed deaths include a group of 30 bodies found in a collapsed Mexico City school. Most were children.

The quake struck while Mexico was still reeling from a separate disaster. At least 90 people were killed in the country’s south on September 7, when a magnitude 8.1 toppled buildings and left dozens of homes without power. That quake was at least 30 times more powerful than Tuesday’s 7.1 magnitude earthquake, though experts say it’s unlikely the two are connected. As one of the world’s most seismically active countries, Mexico is prone to regular earthquakes. The entire country sits at the meeting point of three tectonic plates — the movement of which can cause quakes.

Mexico City itself is particularly susceptible, due to its position on the site of a former lake bed. In fact, according to the U.S. Geological Survey, over the past century at least 19 earthquakes have been recorded in the area around Tuesday’s disaster. Nonetheless, it’s still highly possible the latest earthquake was linked to Popocatepetl’s activity. “The topic is still debated among scientists, but there is enough evidence that earthquakes can and do trigger volcanic eruptions,” geologist Trevor Nace explained in an article for Forbes.

“If a volcano is close to erupting, an earthquake could shake the volcano enough to create fractures or conduits through which the magma can begin erupting,” Nace explained. “This is why we’ve seen several times major earthquakes in volcanic regions trigger volcanic eruptions.”