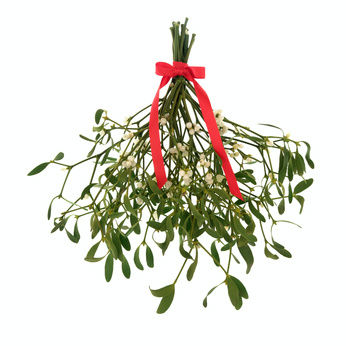 Depending on who is dangling the mistletoe overhead, you may or may not be inclined to steer clear. But aside from being a way to win kisses this time of year, this adorable evergreen plant with its waxy white berries may pose a breakthrough in cancer research.

Mistletoe is actually a parasitic plant that grows on the branches of various trees including poplar, pear, cherry, apple, birch and willow, to name just a few. Historically, mistletoe garnered fame as a pagan religious symbol. The ancient druids believed all who possessed the plant were protected from evil, while the ancient Romans saw mistletoe as sign of fertility and good fortune and often legalized marriages with a kiss under its evergreen leaves.

From a medicinal standpoint, mistletoe has been used throughout history as means of treating nervous disorders thanks to its calming effects. Its use as a treatment for epilepsy can even be dated as far back as the 1600s. Respiratory ailments, menstruation problems, cardiovascular disease and several other chronic inflammation-based disorders have all been treated by this small but mighty plant throughout history.

And while modern medical doctors are often quick to deny herbal remedies their rightful powers, they may soon be taking a second look at mistletoe’s effect on cancer.

Mistletoe’s purported usage as a cancer cure is nothing new. Since the 1920s, doctors have been studying the plant and its effect on solid tumors. In fact, according to the National Cancer Institute, mistletoe is the most widely studied alternative medicine therapy for cancer.

It’s believed that the combination of alkaloids, viscotoxins and lectins present in the leaves are responsible for the anti-cancer effect, though more research is needed to pinpoint exactly what makes these evergreen leaves so potent.

Not all mistletoe is the same however. Scientists believe that each plant contains different compounds based on the host tree that it grows from. Fruit trees such as apple and cherry are thought to be of a higher quality than those of other trees, yet this too is theory that requires more research. But scientists are optimistic that the plant we so often kiss under may hold promise as a cancer cure.

Mistletoe extracts are widely available in Europe and are becoming even more popular as further research explores their anti-cancer effect. They have been proven to kill cancer cells in a laboratory setting and boost the immune system by promoting white blood cell production.

One report found that mistletoe extract injections, when taken in conjunction with traditional therapies such as chemo, effectively reduce side effects and improve the quality of life of the patient. These promising findings have more and more European cancer patients requesting the alternative therapy injection. 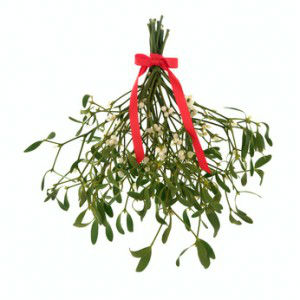 American doctors remain skeptical however. Their main argument is that the current studies, which have mostly been performed overseas and printed primarily in German, are inconsistent and poor in design. At the current time, the FDA does not approve mistletoe extracts, neither are they allowed into the country for uses other than research.

Even so, the National Center for Complementary and Alternative Medicine and the National Cancer Institute continue to find more promising evidence that will perhaps encourage the FDA to reevaluate their stance. For the time being, Americans will have to settle for smooches rather than science when it comes to mistletoe.