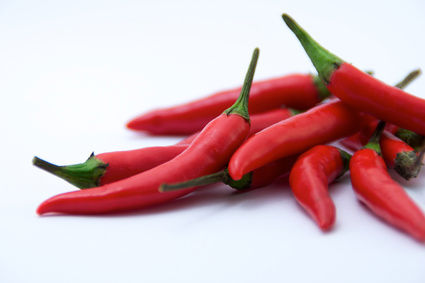 Chile, cayenne and jalapeno for weight loss? Absolutely, says a growing body of research. According to new research performed at the University of Wyoming, the capsaicin found in hot peppers may help to combat our growing obesity epidemic.

Capsaicin is the compound found in spicy hot peppers which makes them spicy hot. It has been found to have many health benefits, and the new research on its relation to mitigating obesity, which was recently presented at the Biophysical Society’s 59th annual meeting, is exciting.

On the research, graduate student Vivek Krishnan explains, “obesity is caused by an imbalance between calorie intake and energy dissipation. In our bodies, white fat cells store energy and brown fat cells serve as thermogenic (heat produced by burning fat) machinery to burn stored fat. Eating calorie-rich food and a lack of physical activity cause an imbalance in metabolism that leads to obesity.”

Through their experiments with mice, Krishnan and his fellow researchers have arrived at the hypothesis that capsaicin may be able to “stimulate thermogenesis” in the cells, and encourage the “browning” of white fat tissue. The researchers hope that someday, capsaicin can be used to help manage obesity and other metabolic ailments.

On top of these new discoveries, hot peppers have been found to aid weight loss in several other ways. Previous research has linked capsaicin (specifically in cayenne pepper) to appetite suppression, and reduced cravings throughout the day. Hot peppers in general have been associated with boosting metabolism.

Hot peppers, including cayenne, chiles, serranos, jalapenos and all your frightfully-hot favorites, are also high in antioxidants, which help keep oxidative stress and inflammation down. Chronic inflammation has been linked to accumulation of belly fat, along with many other illnesses. These peppers are also great for detoxifying the body – an important step in healthy weight loss.

Whether you are trying to lose weight or not, with all the health benefits of the many amazing hot peppers out there, it may be worth it to include some in your diet somewhere, even in small amounts. A little bit of fire may be just what that recipe needed!