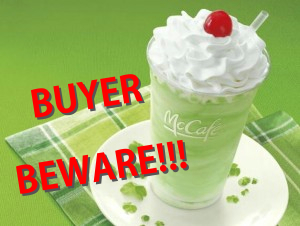 Tis the season… the famed Shamrock Shake is back at McDonalds, for a limited time… This green St. Patty’s “treat” has been around for over 30 years and for those of you who stand patiently in line waiting for yours each year – we hate to be the bearers of bad news but this leprechaun brew is nothing but trouble!

After a little investigating, we found out that even though this minty drink contains just four main ingredients (kind of sneaky, eh?) including, vanilla reduced fat ice cream, shamrock shake syrup, whipped cream and maraschino cherries – each of these ingredients contains ten to fifteen more ingredients each including synthetic colorings, preservatives and other hard to pronounce chemicals that are found nowhere in whole foods.

In fact, this shake actually contains over 50 ingredients – many that most people would have a difficult time pronouncing and most that you would not want to put anywhere near your body if you knew what they consisted of.

Since its unveiling in 1974, there have been over 60 million Shamrock Shakes sold. If you are thinking about getting one this year – you may want to take heed to what our investigation uncovered:

Here is a closer look at what is really inside each of the four main ingredients – doesn’t look so simple and innocent anymore!

If you order a large shamrock shake you are getting the following:

If you order a medium shake things aren’t much better:

The small also tells a sad tale with:

Sugar, the ultimate junk food, is to blame for the expanding waistlines of millions of Americans. Mounting evidence points to sugar as a major factor in not only obesity but also chronic diseases such as type 2 diabetes, cancer, high blood pressure and high cholesterol. One of the major problems with sugar is that the more you consume, the more the body absorbs and the worse the toxic effects become.

Sugar can be classified as an anti-nutrient, as it provides zero nutritional value and simultaneously steals nutrients from the body so it can be digested. Processed sugars, like those found in the infamous Shamrock Shake, along with artificial sweeteners, are the most common types of sugar used in the junk and fast foods that many people today consume out of convenience.

Eating sugary, processed foods can cause a spike in blood sugar, giving you initial energy and then quickly sending you down a black hole of lethargy and irritability. If there’s any kind of “bug” going around, don’t be surprised if you end up sick like your co-workers or family members. Sugar can break down immunity and make you more susceptible to sickness.

Health experts recommend that men consume no more than 37.5 grams of sugar daily and women 25 grams!

It’s not just the Shamrock Shake

Although we are spending white space here bashing the Shamrock Shake – it is important to know that there are many more popular fast and processed food items that tell the same sorry story. Too much sugar, loads of artificial ingredients and a whole lot of empty, useless calories that the body can convert to nothing but fat, fat, fat!!!

If you are really craving a green treat to celebrate the season why not try something that will actually fuel your body? Here is one of our favorite recipes. Why not try it instead this St.Patty’s Day?

Place all ingredients in a blender. Enjoy a happy and healthy St. Patty’s day this year!!