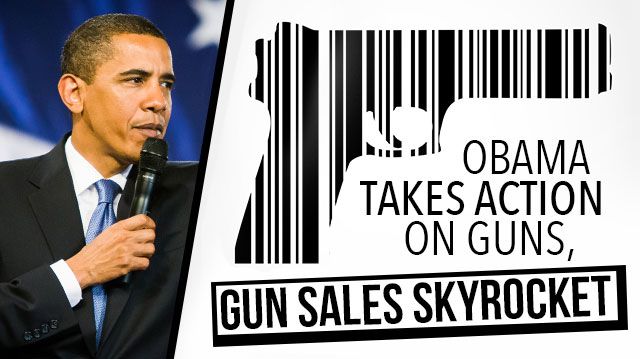 In his last year in the White House, President Obama started 2016 off with what may appear to be a bang, but is really just a political move. This week, he called for the expansion of the background check system to include gun sales online and at gun shows, and more support for mental health care, but experts say that these measures wouldn’t have stopped any mass shootings. The address seems to have backfired a bit: Gun companies have seen a significant increase in sales as enthusiasts worry about the government taking away their guns.

On Tuesday, President Obama issued a live address from the East Room of the White House, calling for more control on the purchase of firearms. “We are the only advanced country on Earth that sees this kind of mass violence erupt with this kind of frequency,” said the president. “It doesn’t happen in other advanced countries. It’s not even close.”

In an effort to combat mass shootings, President Obama outlined his plan for greater gun control:

Enforcement: The president plans to improve the use of our existing gun laws. In addition, 200 new agents will be added to the Bureau of Alcohol, Tobacco, Firearms and Explosives.

Mental health: Barriers that prevent states from sharing information about people with mental health conditions who have been barred from owning a firearm will be removed. The president plans to spend $500 million to increase the availability of mental health care throughout the U.S.

Technology: Obama wants more research — conducted by the Departments of Defense, Justice, and Homeland Security — into technology focused on gun safety, like “smart guns” that require a fingerprint match for authorized users.

NPR’s Scott Horsley reported that the “ATF will play a central role in the administration’s move, by clarifying what it means to be ‘engaged in the business’ of selling guns. Until now, some collectors and hobbyists have been able to avoid that designation.”

What does this mean?

President Obama’s order is more political than anything at this point. As Michael Sisak from the Associated Press wrote, these measures don’t do much to curb school shootings like the one that took place at Sandy Hook Elementary School.

“Those measures are seen as crucial to stemming gun suicides – the cause of two-thirds of gun deaths – by blocking immediate access to weapons. But, an Associated Press review shows, they would have had no impact in keeping weapons from the hands of suspects in several of the deadliest recent mass shootings that have spurred calls for tighter gun control,” Sisak reported.

He also pointed out that the only shooting that could have been prevented should have been stopped anyway. Dylann Roof, the Charleston church shooter, had a criminal record and under existing gun laws, should not have been able to purchase firearms. An error in the paperwork allowed him to get his hands on his weapon.

Liz Peek of The Fiscal Times points out that very few criminals gain access to firearms through the “gun show loophole” that the president’s order now closes. “A 2001 survey of state and federal prisoners discovered that less than one percent [of criminals] had bought their weapons at a gun show,” Peek writes.

Citing a survey of inmates conducted by the Chicago Sun-Times, Peek notes that “70 percent of those locked up had acquired their weapons from friends or gang members; another favorite source was ‘straw’ purchases made by someone capable of passing the background check.”

As Glenn Kessler of The Washington Post points out regarding online sales, “There is nothing unique about the internet; the laws governing private transactions and interstate sales are exactly the same.” In fact, President Obama was incorrect when he spoke of internet sellers. “They face the same rules as other sellers – rules that the administration now says it will enforce better.”

At about the same time that these new rules were being announced, Smith & Wesson Holding Corporation issued a press release stating that the company has updated its expectations for the third quarter and the full 2016 fiscal year. By the end of its third quarter, which ends January 31, Smith & Wesson expects to make anywhere between $175 million and $180 million in net sales, with $650 million to $660 million in net sales expected by the time the fiscal year ends on April 30, 2016.

Business Insider reports that Smith & Wesson shares surged with an increase of 5.9 percent by the end of the day Monday. Sturm Ruger shares also jumped 2.9 percent. What makes this remarkable is these shares saw an increase on a day that markets fell sharply, with the Dow Jones Industrial Average falling 1.6 percent. There’s nothing like gun control rhetoric when it comes to boosting firearm sales. As we saw with the rush to buy ammo a couple of years ago, when enthusiasts believe they won’t be able to buy guns and ammunition in the future, they begin to stock up right now. 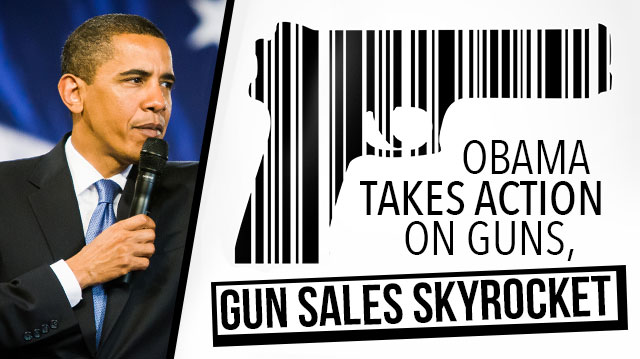 Buying a gun couldn’t get any easier

Purchases through GunTV will be facilitated by Louisiana-based gun distributor Sports South. Firearms will be shipped to a vendor close to the purchaser, where the final sale will be completed, and background checks will be conducted.

President Obama’s actions this week — while logical and reasonable — are superficial, and are likely motivated largely by the upcoming presidential election. Gun control has always been an important issue for the Democratic party, and by pushing for more restrictions on guns, Obama is setting the stage that will require Republican candidates to take a definitive stand against increased gun control, a move that Democrats believe may backfire on them.

What do you think of President Obama’s new measures?

Megan Winkler is an author, historian, Neurosculpting® meditation coach, certified nutritional consultant and DIY diva. When she’s not writing or teaching a class, Megan can be found in the water, on a yoga mat, learning a new instrument or singing karaoke. Her passion for a healthy mind-body-spirit relationship motivates her to explore all the natural world has to offer