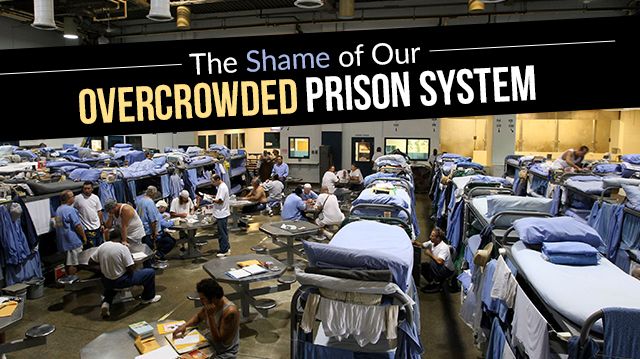 The American prison system holds more than 2.3 million people and that system is stressed. So stressed, in fact, that prisoners are being doubled up in solitary confinement, which changes a torturous situation into a life-threatening one. It’s clear we need to reform our prison system.

The authors state that nonviolent drug crimes are a “defining characteristic” of our prison system. One in five incarcerated individuals is behind bars for a drug offense. “While most people in state and local facilities are not locked up for drug offenses, most states’ continued practice of arresting people for drug possession destabilizes individual lives and communities,” write the authors. When these people are incarcerated, they’re going into largely overpopulated facilities, but they aren’t the only ones.

For example, 19,000 people are currently being held in federal prisons for violating immigration laws. The report also states that 33,000 others are currently detained by the U.S. Immigration and Customs Enforcement (ICE).

It’s pretty clear from these statistics that the War on Drugs and our immigration policy needs to be rethought, especially in light of the overcrowding of our prisons.

The Marshall Project, in collaboration with National Public Radio, published a story last month about prison overcrowding. Menard Correctional Center in southern Illinois is so overcrowded that prisoners are being stuffed into solitary confinement cells in pairs. The 4-foot, 8-inch by 10 foot, 8-inch cells are built for one person, but that doesn’t keep correction officers from placing two prisoners together for “disciplinary segregation.”

Solitary confinement is torture, plain and simple. “It doesn’t make us safer. It is an affront to our humanity,” said President Barack Obama in an op-ed for The Washington Post in January. The Pope and the United Nations agree.

Isolation contributes to mental instability, and when prisoners are housed together in very small cells it can prove deadly. For instance, when David Sesson and Bernard Simmons were placed in the same solitary confinement cell at Menard in November 2014, the two lasted less than six hours together. The pair fought and Sesson ended up killing Simmons. Sadly, this story is just one example of the terrible state of our prison system.

The American Legislative Exchange Council (ALEC) has crafted policy models to help with the problem; these policies would also save states millions of dollars. ALEC has proposed proven practices to redirect nonviolent offenders to successful programs focused on rehabilitation and education. The hope is that such policies would reserve prison cells for the most predatory and violent offenders. But in light of stories like that of Sesson and Simmons, reform can’t come soon enough.

It’s time to rethink how we view prisoners. They’re human beings too. It’s time for change.