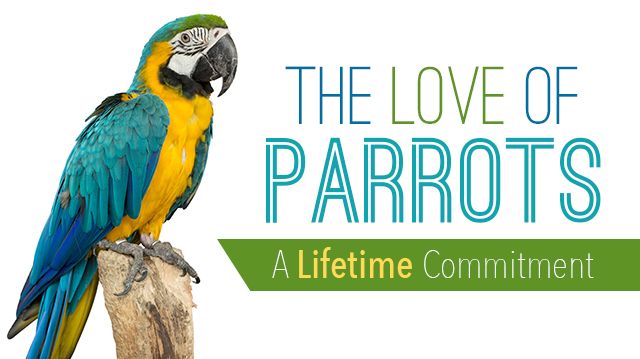 Earl Hamner, Jr., the creator of the 1970s TV show The Waltons, died recently. Fans of the show recall each episode’s ending, when voiceovers of family members said goodnight to each other. Margaret Quali from Upper Darby, Pennsylvania, hears similar “good nights” every evening, but they are emanating from rescued African grey parrots preparing for bedtime. Since she started Jojo the Grey Adoption and Rescue for Birds 14 years ago, she has found new homes for over 3,000 birds.

Quali named her rescue after her first bird, Jojo. The Congo African grey parrot was caught in the wild and his captors chopped off his wings with a machete. Although Jojo was terrified when he first came to Quali, years of love and care have turned him into a calm bird who talks a great deal. Quali told Philly.com that she relates to these rescue birds because she spent years of her childhood in foster care.

No matter their origin, parrots are not domesticated animals like cats and dogs. Every bird still retains wild instincts. The World Parrot Trust (WPT) works to release wild-caught parrots to protected habitats, where they are not in danger of recapture. However, birds raised in captivity are not suited for release back into their natural habitat. They are too dependent on people for food and other needs. It’s truly a dilemma for these noble creatures.

Because of widespread poaching for the pet trade and deforestation, African grey parrots are in danger of disappearing from their native ranges. The WPT estimates that one million African grey parrots entered the international wild bird trade from 1982 to 2001, with a mortality rate ranging between 40 and 60 percent. In the Caribbean, the yellow-shouldered Amazon parrot is down to a few thousand birds due to the wild bird trade. Dozens of other species face similar fates. The United States banned the importation of exotic birds in 1992 under the Wild Bird Conservation Act, but smuggling is still an issue. The European Union enacted a similar ban in 2007.

Everybody’s talkin’ at me

Perhaps singer-songwriter Harry Nilsson kept parrots! African greys are considered the smartest parrots and also the most talkative. They can learn countless words and phrases, and it’s possible to have real conversations with them. The smaller Quaker parrot is also a good talker. Besides speech, parrots imitate other pets or household sounds, and pick up phrases, songs and noises from the TV or radio. Some birds are “closet talkers.” They won’t speak in front of people, but leave the room and the chatter starts.

The WPT issues guidelines for keeping a pet parrot healthy and happy. These include the following:

Parrot owners must find a veterinarian specializing in exotic birds. Parrots have special needs for which standard small animal vets do not have the expertise.

There’s an old saying that the only thing wrong with dogs or cats is that they don’t live long enough. Unfortunately, that axiom doesn’t hold true for parrots, and it’s a major reason why parrots end up at rescues or abandoned. These birds live a long time, and often outlive their owners. In a family with a true commitment to a parrot, it’s possible that three generations of adults — grandparents, parents and grandchildren — could have the same pet bird. Here are some average life expectancies for healthy birds:

If you do want to share your life with a parrot, contact a parrot rescue. There are far more birds in need of homes than homes available. If you are reluctant to take on a parrot because of the bird’s lifespan, a parrot rescue can match you up with an older, healthy bird.