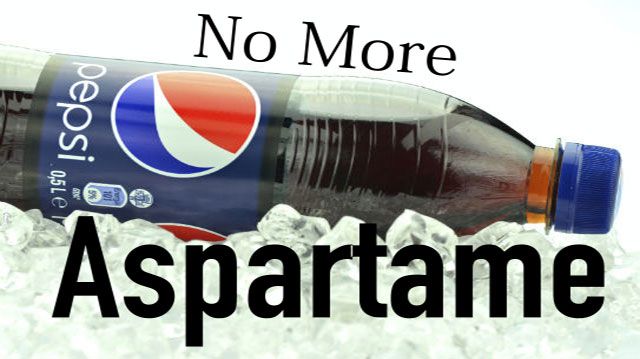 Big news has hit the press! PepsiCo announced on April 24th that it will no longer sell Diet Pepsi made with aspartame in the United States.

I think that this represents a significant win for U.S. consumers (despite the fact that Diet Pepsi products elsewhere in the world will continue to be formulated with aspartame).

This move comes after sales of Diet Pepsi dropped 5.2% in 2014. Diet Coke sales dropped 6.6% in the same year. The fall in diet soda sales started in 2005 and 2006, and has since increased in speed, dropping 20% since 2009. The decline is attributed to decreasing consumer interest in ’diet’ products and soft drinks in general, which is a trend I’ve been very pleased to observe.

The new Diet Pepsi, sweetened with sucralose (commonly known as Splenda) and acesulfame-potassium is said to taste the same, but removes concerns about the safety of aspartame – because when you look into it, there are definitely some scary things about how aspartame is made.

“To Diet Pepsi consumers, removing aspartame is their No. 1 one concern,” says Seth Kaufman, a senior vice president at PepsiCo. “We’re listening to consumers. It’s what they want.”

Pepsi’s sweetener switch would seem to put pressure on Coke to consider a change as well, in order to keep up with consumer demands. Coca-Cola has made dubious claims about aspartame in the past, taking a different tack in 2013 by releasing a new product, Coca-Cola Life, which is sweetened with cane sugar and the naturally-derived sweetener stevia. Coca-Cola has not indicated they will make any change to the recipe of Diet Coke.

The history of aspartame is fraught with conflict. It was originally discovered in 1966, as an accident while researchers were working toward a new ulcer drug. Approval was followed by a retraction based on demonstrated public concern over the fact that the substance produced brain tumors in rats. During the 70s and 80s there was continued conflict within the FDA concerning the safety of aspartame.

Upon digging into the research, I found records of public health complaints including headaches, dizziness, vomiting, nausea, blurred vision, seizures, convulsions and many other reactions to aspartame. In 1984 the FDA task force investigating the manufacturers of aspartame stated that company officials had made “deliberate decisions” to conceal aspartame’s toxic effects.

The concern is that when aspartame is consumed, it breaks down into its constituent amino acids aspartic acid, methanol and phenylalanine . Methanol breaks down further into formaldehyde, formic acid and diketopiperazine. Methanol is a toxin on its own, and its sub-units have been demonstrated as carcinogenic.

Medical World News has reported that the methanol content of aspartame is 1,000 times greater than most foods under FDA control. Regardless, the FDA has claimed that the byproducts remain below the threshold of toxicity when consumed in normal daily amounts.

A number of studies have supported the FDA’s opinion that aspartame consumption is safe. In the face of Pepsi’s changes, experts recently pointed out that aspartame is “one of the most exhaustively studied substances in the human food supply, with more than 100 studies supporting its safety.”

However, it has also been pointed out that more complaints are filed with the FDA regarding negative side effects from consuming aspartame than any other food additive. Many other studies have pointed out issues associated with aspartame, such as migraine headaches, damaged kidney function and behavior problems.

Is sucralose an improvement on aspartame?

PepsiCo’s strategic move to improve the public opinion of diet soda has spurred a move toward the more healthfully-perceived sucralose, or Splenda. Whether sucralose is an improvement on aspartame is debatable.

Sucralose was, like aspartame, discovered accidentally, in an industrial lab in 1991. It is manufactured by adding chlorine to sucrose. This renders the molecule largely indigestible and therefore non-caloric. The effect is a sweet taste at least 320 times stronger than natural sucrose.

While sucralose has been cleverly marketed as a safer sweetener, studies have shown it alters the gut microbiome and may break into metabolites which have mutagenic effects (can actually cause genetic mutations). It has also demonstrated effects on glucose, insulin and glucagon-like peptide levels. Overall, sucralose is not an inert compound; it does not simply pass through the GI tract without any effect.

However, considering the strength of negative sentiments and distrust of aspartame, sucralose seems to be a step in the right direction.

Ace-K has potential dangers too

While those against aspartame can celebrate a victory, another concern with diet soda remains. Acesulfame-potassium (or ace-K) was added to formulations when concerns arose about the deterioration of other artificial sweeteners at high temperatures. Ace-K was added as a stabilizing ingredient.

Michael Jacobson, director of the advocacy group Center for Science in the Public Interest points out that ace-K “is poorly tested, but the tests done by the manufacturer in the 1970s suggest that ace-K, too, might pose a cancer risk.”

PepsiCo representatives continue to insist that numerous studies demonstrate that the sweeteners they use are safe.

Problems with diet soda in general

Despite the many studies, the slick marketing and the careful positioning, I just don’t trust diet soda, or soft drinks at all for that matter. These substances are not necessary in a human diet.

For those who enjoy soft drinks and insist on consuming them, there has been much debate surrounding whether diet soda is a smarter choice than regular sugar-sweetened soda .

Researchers point out that a sweet taste trains the body to expect calories. Certain changes occur in the brain and digestive tract when we taste sweetness. This includes the metabolism revving up and hormones being released. When the taste is there but the calories aren’t, body processes are confused. Blood sugar levels are increased, which is an early warning sign for metabolic disease and type 2 diabetes.

Scientist Eran Segal of the Weizmann Institute of Science in Israel has pointed out that the amount of time we have been consuming diet soft drinks coincides with the epidemic levels of obesity and diabetes in our society.

Sometimes it seems that, if you’re going to drink soda, choosing regular over diet is a better way to go, in moderation of course. But there are the many health effects of high-fructose corn syrup that need to be taken into account – since that is a very common sweetener used in non-diet soft drinks. It’s interesting to note though, that the amount of sugar in regular soda by volume is about the same as that found in apple juice.

Overall, consider the history of diet soda. Diet Pepsi was first sold in 1964, with saccharin as its sweetener. It was reformulated with aspartame in 1983, and then switched to a blend of aspartame and ace-K in 2013. As the food industry continues to release more cleverly engineered substances that trick the brain into sensing flavours, and studies keep pointing out the dangers of one sweetener after another, I have to ask, why do we bother in the first place?

Consumer backlash – together we have a voice

In the meantime, there is certainly much to celebrate when you consider the gravity of the fact that mega-corporations like PepsiCo are taking the voices of the holistic health community into account. 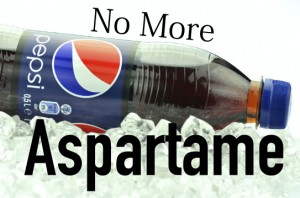 We can see this as a direct result of grass-roots actions like spreading the message about concerns with aspartame. By critically observing the effects of chemical ‘food’ products and voicing these issues publicly, a critical mass has been created where health-conscious consumers have swayed the food industry in a noticeable way. As a group, we have said that we don’t care if the profit-driven voices are saying these substances are safe – we care more about those studies that sound the alarm on potential risks.

It’s important to continue this momentum! Together we have a voice, and we need to continue to vote with our dollars to hit these large corporations where it hurts them most: profits. Every dollar you shell out at the supermarket or in restaurants not only influences your own health, but can make a change in what ends up on the shelves and in the carts of everyone in our society.

We can see how consumer backlash has shaped the movements of soft drink producers over the years. First, diet sodas were created as a result of consumer concern about consumption of high-calorie beverages. Now we have shifted the needle again with the outcry against these ‘alternatives’, with aspartame being the latest casualty.

Not everyone shares the Alternative Daily community’s motivation to research and improve on nutrition and health, but we can lead by example. We can apply this concept of grassroots change to other important areas, such as the labelling and regulation of GMOs. I think we can all consider the Diet Pepsi change to be a point on the scoreboard in our favor.