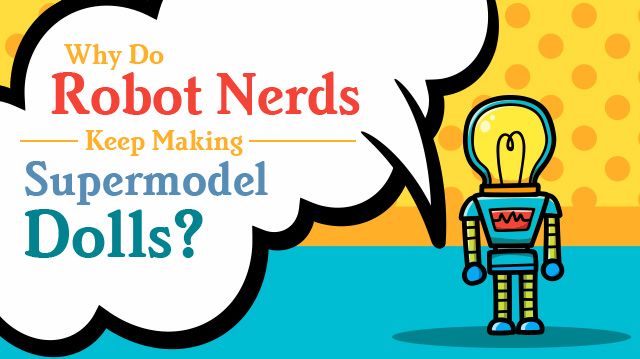 Disturbingly realistic humanoid robots: One looks an awful lot like Scarlett Johansson, while another is nicknamed the “robot goddess.” Why do robot nerds keep making these dolls? Well, we know why, but perhaps the bigger question is: What are the implications here?

Hong Kong robotics enthusiast, Ricky Ma, has spent a year and a half and $50,000 to create his first female robot prototype that’s based on a Hollywood star, although he didn’t disclose who. It doesn’t take much effort to draw a comparison to Scarlett Johansson—the robot looks eerily like her. It responds to programmed verbal commands and Ma’s video of the robot demonstrates, among other things, her gripping ability. I’ll let you draw your own conclusions on that one.

Similarly, researchers at the University of Science and Technology of China have created a “robot goddess,” named Jia Jia. And she is beautiful, if creepy as all get out. Despite the fact that the available materials used to construct the robot mean that Jia Jia doesn’t have very expressive facial features, she does know to respond with sayings like, “Yes my lord, what can I do for you,” and “Don’t come too close to me when you are taking a picture. It will make my face look fat.”

Fantastic! Because real women have a hard enough time feeling good about themselves while taking a selfie, we had to reinforce it with a robot who’s worried about looking fat in a picture? Don’t get me started on that, “Yes my lord,” reply. It should be noted that she also holds her head and hands in a very submissive manner.

Regardless of their use, these robots are just the latest iteration of virtual women, glorified by men for their beauty and submission. Did you know there’s a virtual reality adult toy that syncs up with a video game that allows men to rescue a woman captured by a horrible monster and then enjoy their “rewards” after? Yes. It’s as gross as it sounds.

The United Nations estimates that 35 percent of women across the globe have experienced physical and/or sexual intimate partner violence or sexual violence at the hands of a non-partner. But UN Women also notes that some studies, like one conducted by the World Health Organization in 2015, put that number at around 70 percent.

When you consider the Scarlett Johansson lookalike robot or Jia Jia, you might wonder what these robots and other lifelike dolls are doing to increase or reduce the violence and marginalization of women. Do they simply fulfill a fantasy, or do they contribute to the overall problem that we ladies regularly face on the street? Will we receive more or fewer cat calls or less slut shaming if more of these dolls and robots are produced? What about online harassment via social media? The crux of the problem is we won’t know until more of them are on the market, and we can only assume they’ll eventually be more accessible to the public.

Whether robotics enthusiasts are just bored, complete shut-ins, have a hard time talking to an attractive member of the opposite sex, or are motivated by some other goal, one thing’s for certain: they’re changing the way we interact with non-humans in profound ways.