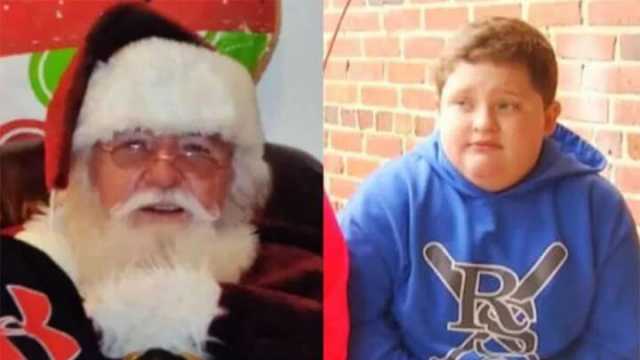 Santa Clause, the legendary patron saint of children embodies all that is good in the world. So, anyone who takes on his persona and bares his image should never harbor prejudice against a child — and that includes fat-shaming. But, unfortunately, that’s just what happened this holiday season to one nine-year-old boy.

A visit to Santa should be a happy experience for most children. But, not if they’re told to lay off the burgers and fries. That’s exactly what happened to a nine-year-old from Forest City, North Carolina. After simply giving Santa his wish list, Anthony Mayse was then given a little untimely dieting advice. Earl Crowder, who was employed as Santa at the Forest City Christmas House told Mayse to “lay off the hamburgers and French fries.”

“That really just disrespected me. I felt awful,” said Mayse. “I went out and I started crying because I just felt so bad.” No child should leave Santa feeling like that. Ashley Mayse, Anthony’s mother, said she was horrified by Santa’s comment. “I was just mind-blown, I wished a million times that we never went. What set me off was when he started to crying,” she said.

Santa did apologize to Anthony, after his family complained to the company. But what Ashley Mayse really wanted was for the bad Santa to be fired for fat-shaming her son. “When he went to apologize to me,” said Anthony, “he didn’t even mean it.”

Even Santa has a bad day

Friends of Crowder say that he may have been in pain when he told the boy to “lay off the hamburgers and French fries.” According to Kelly Butler, Crowder’s niece, he was recently hospitalized with a blood clot in his lung.

Now Butler wants everyone to know that her uncle’s seemingly crude comment may not have been ill-intended after all. “We all have a slip of the tongue and we regret it and we say I’m sorry,” she told the Daily News. “I hate the fact that he was labeled ‘Bad Santa,’” Butler said.

The longtime Santa Claus is apparently beloved within his community. Local businesswoman, Sunshine McCurry, has set up a Facebook page to support Crowder. Members are posting their favorite memories with the man, even adding sweet photos of their children sitting on his lap.

One supporter writes: “You have been doing so much for the children and community for years. You are a great human being! God bless you!” Since the incident, there are over 1,300 followers on the page, many of whom say they have known the vet most of their lives.

Meanwhile, comments throughout social media are divided, with some suggesting the fat-shaming was fitting — and even helpful. But while some believe that making overweight people feel ashamed of their weight or eating habits actually helps motivate them, nothing could be further from the truth. In fact, psychologists now say fat shaming doesn’t motivate people. It just makes them feel terrible and actually causes them to eat more and gain more weight.

So, while this Santa may have had a bad day, it really did nothing for nine-year-old Anthony Mayse, except perhaps give him a complex that may take him years to recover from. But what do you think, was Santa hurtful or helpful?