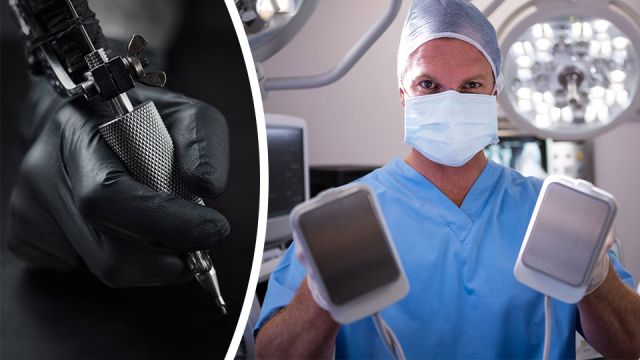 Put yourself in this situation: you work in a hospital emergency department, and a patient has just come in with a critical condition. It’s a 70-year-old man; he’s deeply intoxicated and unconscious. Before your eyes, he falls into septic shock and is at an imminent risk of organ failure. You rush to treat the man, but something catches your eye. It’s a tattoo on his chest that simply reads, “Do not resuscitate.”

ICYMI: Should doctors heed ‘do not resuscitate’ tattoos? And is a do-it-yourself gene editing kit on your holiday wishlist?https://t.co/4TBvoaI0Eq pic.twitter.com/GJOsbUAXEY

What do you do?

This might sound like the kind of hypothetical conundrum you’d face in an undergrad philosophy class, but it’s exactly what happened at Miami’s Jackson Memorial Hospital. Hospital staff were shocked to discover the tattoo, and initially baffled as to how to treat the man.

“We’ve always joked about this, but holy crap, this man actually did it,” critical care physician Gregory Holt told The Atlantic. He continued, “You look at it, laugh a little, and then go: Oh no, I actually have to deal with this.”

The facts and fears

Before deciding for yourself what you’d do, you might want to hear all the facts, not to mention the plethora of ambiguous nuances that riddle the case. The patient had been brought in by paramedics with no identification and no family present. An order was sent out to track down his next of kin, but that takes time. As for his apparent medical state, Holt reeled off a list of conditions: “a history of chronic obstructive pulmonary disease, diabetes mellitus and atrial fibrillation.”

In other words, it’s possible the patient may not have been doing great for a while. As for the tattoo, Holt explained he had his own set of fears that the message might not be an accurate representation of the man’s desire. “Tattoos might represent permanent reminders of regretted decisions made while the person was intoxicated,” Holt noted in an article on the event in The New England Journal of Medicine.

Of course, that’s only the start of the ethical rabbit hole. What if the tattoo was just some kind of joke? Could it simply be the name of the patient’s favorite obscure metalcore album? Was the patient even in a sound state of mind? What if the tattoo had indeed been initially intended as a serious message, but the patient had since changed his mind?

At this point, the emergency staffers turned to the law for guidance — and found nothing. Do not resuscitate (DNR) orders are usually carefully managed affairs and can be complex. While critics argue the process is unduly difficult to undertake, advocates of the DNR status-quo argue the decision itself should be far more difficult than the paperwork it can create.

As for attempts to circumvent the need for an official DNR, Holt said tattoos aren’t a good option. “This patient’s tattooed DNR request produced more confusion than clarity, given concerns about its legality,” he noted.

Tattoos simply aren’t legally binding documents, leaving the staffers back at square one. So what did they do? The short answer: both. According to Holt, “We initially decided not to honor the tattoo, invoking the principle of not choosing an irreversible path when faced with uncertainty.”

The patient was put on treatment, but Holt said the decision didn’t sit right. “This decision left us conflicted owing to the patient’s extraordinary effort to make his presumed advance directive known; therefore, an ethics consultation was requested,” he explained.

The results of the consultation contradicted the emergency staffers’ original decision. Despite the endless what-if scenarios, the hospital’s ethics consultants concluded, “it was most reasonable to infer that the tattoo expressed an authentic preference.”

In the end, doctors honored his wishes

In the end, the hospital drew up an official DNR for the man, whose condition deteriorated as the night wore on. “He died without undergoing cardiopulmonary respiration or advanced airway management,” Holt finished.

Although the patient was never able to give his final words, a further investigation found the tattoo could have been far from the patient’s only attempt to make his last wishes heard. “Subsequently, the social work department obtained a copy of his Florida Department of Health ‘out-of-hospital’ DNR order, which was consistent with the tattoo,” Holt said.

The state DNR order may have retrospectively made the decision clearer, but Holt concluded by arguing the tattoo didn’t make the initial choice any easier. “Despite the well-known difficulties that patients have in making their end-of-life wishes known, this case report neither supports nor opposes the use of tattoos to express end-of-life wishes when the person is incapacitated,” he said.

What do you think? Are DNR tattoos a clear-cut way for patients to make their dying wishes heard, or do they simply make a difficult situation even more difficult? Let us know in the comments below.