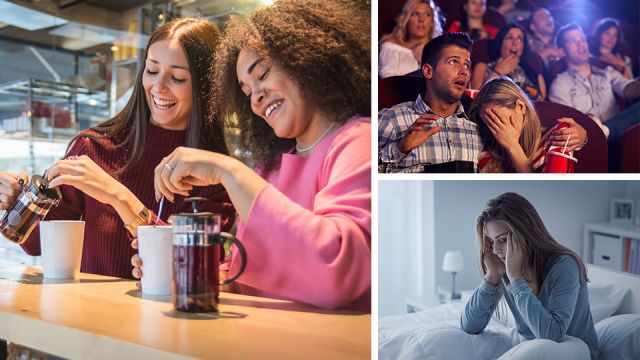 Empath seems to be the new buzzword of late, but the truth is empaths have been around since the dawn of time. Empaths are highly developed individuals who sense the emotions and thoughts of those around them. This may include an ability to understand a person’s desires, how they feel, if they’re suffering, what they’re inking and even what illnesses they may be experiencing. Even if you are not an empath, you can certainly strive to be more empathetic towards other people and animals.

Empaths knowingly or unknowingly tune into the energy vibrations of fellow human beings and even animals. While it may seem overwhelming at times, it is actually a gift that should be embraced and cherished. Here are 20 signs that you are indeed an empath.

1. People are naturally drawn to you

When you’re an empath, people of all backgrounds and animals are drawn to you. Whether they are aware that you’re an empath makes no difference. Empaths naturally attract others by their warmth, genuine compassion and ability to reserve judgment. That said, if they’re not careful, an empath can easily become a dumping ground for everyone else’s problems, which will quickly become their own.

Even without being told, empaths just know things. But it’s a knowing that goes far beyond intuition or gut feelings. In fact, the more attuned you are, the stronger your “knowing” becomes.

Empaths tend to feel overwhelmed and almost suffocated in area like shopping malls, supermarkets, stadiums and even packed elevators. Anywhere that groups of people congregate can overwhelm an empath, because they are being bombarded with various emotions and feeling from those around them.

4. Taking on everyone’s emotions as your own

Empaths will often take on everyone’s emotions — near or far. They also have the ability to know what others are thinking about them. In fact, the more adept an empath is, the better they are at picking up what others actually think of them, even from great distance.

5. It’s unbearable to watch violence, cruelty or tragedy on the TV

Since empaths take on other’s feelings, watching violent movies or movies where people or animals are being hurt can feel unbearable to watch. Even reading the news can make them feel ill and depressed at times.

6. You know when someone is ill

An empath will often know when someone is ill, and may even manifest some of the symptoms associated with a person’s illness — particularly to the people they are closest with.

7. You always root or look out for the underdog

Anyone who faces adversity, lacks the advantage of their opponent and has all the odds stacked against them, also has the attention and compassion of an empath. Those who suffer from emotional pain or being bullied often find an empath on their side.

Empaths often feel fatigue and are drained of energy. This happens because they take on too much emotional stress from others around them, often shouldering the pain as if it were their own. Even sleep provides little relief.

9. You have an addictive personality

Empaths are often addicted to alcohol, drugs, food and even sex, because the vice is a means of blocking the emotions of others. It’s a way to self-protect and keep others at a distance.

10. You are drawn to the healing arts

Empaths are often drawn to healing, holistic therapies and anything metaphysical. Yet, while many empaths can heal others, they often turn away from actually being a healer because they take on far too much from the person they are trying to heal.

11. You are drawn to all things supernatural

Anything supernatural intrigues empaths, and they are not easily scared or shocked. This is likely because empaths have an all-knowing understanding that there is more to this world and universe than meets the eye. Usually, this keen understanding is developed early on in life and contributes to being empathic.

12. You are a creative soul

13. You love being in nature and with animals

Empaths love to be outdoors, surrounded by nature. They also have a keen love for all animals — great and small. You won’t find an empath squashing a spider. More likely, they’ll be carrying it outside to its freedom. For empaths, the freedom to be outdoors and having pets are essential for life.

14. You need your solitude

As an empath, you need solitude away from the constant hustle, bustle, noise and emotions you experience. This is particularly important for empathic children. Meditating is a great tool for empaths to utilize.

15. You get bored or distracted easily if not stimulated

Empaths may need quiet time, but they also need to keep their mind stimulated. If school, work or life becomes dull, you’ll often find an empath daydreaming or doodling.

16. Strives for the truth

Empaths strive for truth above all else, and they won’t be satisfied until they find that truth. This becomes even more important when an empath discovers their gifts from birth.

Empaths are often on their computer, smartphone or at the library searching for answers to unanswered questions. In fact, it can be quite frustrating for an empath to not find an explanation. Even if they know something is true they will seek out confirmation, which can lead to brain drain.

18. You tend to carry excess weight

Empaths may not necessarily overeat, but that doesn’t stop them from carrying excess weight on their body. That’s because the excess weight acts as a protection against negative energy flowing in and having a great impact.

19. You love everything brand new

Empaths tend to steer away from antiques that carry the energy of those from the past. In fact, for an empath, anything that’s been pre-owned carries the energy of the previous owner. Most empaths prefer new homes and new cars if they can manage it financially.

20. Sense the energy of food

This is a tough one for many empaths. While they may love the taste of meat, fish and seafood, they don’t like to eat it because they feel the vibration of the animal, particularly if the animal has suffered. Vegetarianism and veganism are common among empaths.

If you can say yes to most or all of the above, then you are most definitely an empath. However, if you don’t believe you are an empath, but wish to harness your empathetic nature, then you can also learn from all the above. But does that mean you allow others to take advantage of your kindness and goodwill? Absolutely not! Use your powers wisely.