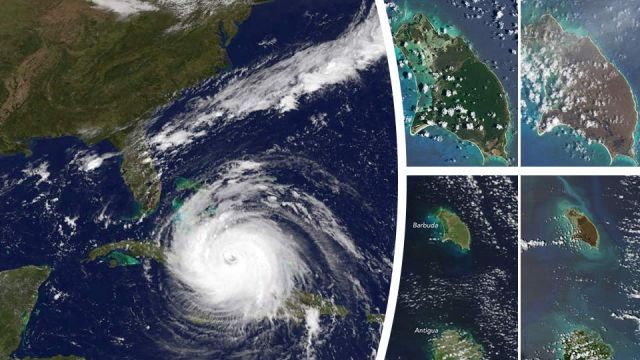 Hurricane Irma was one of the worst storms in recorded history, but to really understand its devastation, you need to see it from orbit. In stunning images captured by the Landsat 8 satellite, NASA’s Operational Land Imager captured the almost overwhelming scale of destruction Irma carved through the Caribbean.

One of the worst hit islands was Virgin Gorda. In the first image taken on August 25, it looks like a tropical paradise, with rich green foliage covering the interior, bordered by white sand beaches. The second image tells a very different story. Taken on September 10, the photo shows a barren brown island barely recognizable as Gorda. NASA’s Kathryn Hansen explained, “There are a number of possible reasons for the browning.”

“Lush green tropical vegetation can be ripped away by a storm’s strong winds, leaving the satellite with a view of more bare ground. Also, salt spray whipped up by the hurricane can coat and desiccate leaves while they are still on the trees,” she said.

However, Gorda isn’t all brown. If you look closely, you can see some parts of the island still show a little green.

“Note how some of the vegetation on the south and west of the island is a bit greener, likely because it was partly shielded from winds by the hills in the center,” Hansen commented.

A similar story can be seen over Barbuda and Antigua. The original images, taken on August 21, show a pair of green islands with a smattering of clouds. The side-by-side comparison with another photo from September 8 couldn’t be starker.

It’s not just the before and after shots that are striking, but also the differences between the islands. While Barbuda was directly hit by Irma on September 6, Antigua was spared the worst the storm had to offer. This is reflected in the different levels of visible devastation on the islands, with Barbuda looking like a desolate wasteland.

“In contrast, vegetation on Antigua appears relatively healthy and intact. With the storm’s center passing to the north, the island sustained less damage,” Hansen noted.

For a closer look, here’s a side-by-side of Barbuda, before and after the storm hit.

The next island is the French tourist hotspot of Saint Barthélemy.

Like the other islands, Saint Barthélemy went from a verdant tropical paradise to ruin practically overnight. Known for its beautiful reefs and volcanic interior, the island looks like a husk of its former self.

Finally, let’s zoom out and see this wide shot capturing a number of the Virgin Islands.

This wide image shows the across-the-board damage across the islands, including Tortola, St. John and Gorda. From this far out, it’s hard to see details, so let’s zoom into a few Caribbean islands. Here’s Tortola, close up.

These before and after photos from Google Earth show the damage Irma brought down on the British overseas territory of the Turks and Caicos Islands.

Caribbean and Gulf Coast @DigitalGlobe imagery shows the before and after of #HurricaneIrma. Here: Turks and Caicos https://t.co/7yb4nflQKj pic.twitter.com/rsOFEzVi4Y

However, to really see the havoc Irma inflicted, look no further than Florida.

Pay particular attention to the color of the ocean. In these before and after shots, the impact on the sunny state’s coastline couldn’t be clearer. The lighter colors show sediment and debris that bled into the sea, illustrating just how much the storm managed to disrupt the shallow waters off Florida’s coast. For a better look, check out the same images overlaid.

Before/after #Irma shot of S Florida. Note all the sediment stirred up in the shallow waters! MODIS imagery from https://t.co/vaXfaCS4UV pic.twitter.com/yTCw58blka

The only thing missing is an in-between shot, showing the storm itself. Luckily, NASA’s MODIS satellite captured that too.

In this image, Irma can be seen looming over Florida, engulfing much of the state in a huge white blur. Even the sheer size of Irma doesn’t do it justice. According to AP science writer Seth Borenstein, Irma created about as much energy as every hurricane in a typical Atlantic storm season combined.

For more photos, DigitalGlobe has released a stockpile of Creative Commons images showing the full extent of Irma’s rage. Find them here.