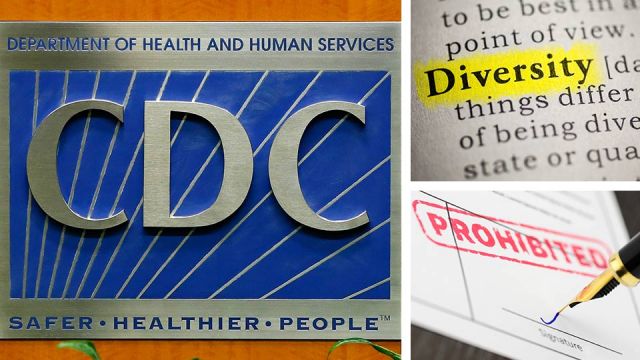 The Centers for Disease Prevention and Control (CDC) and other divisions of the U.S. Department of Health and Human Services were told late last week by the Trump administration that they should avoid using certain words in official documents, as of next year.

Surprisingly, the words don’t have anything to do with security, but rather, they seem to have something else in common: they’re things that Trump isn’t a fan of.

In politics, this word is often used in a workplace or social context, to mean that having a range of people from different ethnic, gender and sexual identities is important. President Trump has spoken out against the “diversity visa” where green cards are awarded to 50,000 people a year from countries that don’t send many migrants to the U.S.

The word likely refers to people who, for social, economic, political or health-based reasons, are less protected.

This word can be used in various ways, but would most likely be a concern to the Trump administration when it refers to monetary or legal benefits that people have a right to. Trump’s proposed budget for next year included a $1.7 trillion slash to entitlements. Children’s health insurance, food stamps and disability insurance were among programs that were affected.

This term refers to people whose gender identity, expression or behavior is different to what is typically associated with the sex they were assigned at birth. Donald Trump tried to ban transgender people from serving in the military, but the ban was blocked by a federal judge.

The unborn offspring of a mammal — and in this context, probably a human. This word may have been included in the list because those who support the right for women to decide to have an abortion, usually refer to the unborn offspring as the “fetus,” while anti-abortionists tend to refer to it as a “baby.” Trump supported a bill to ban abortions after 20 weeks, nationwide.

Trump has campaigned to eliminate funds that support research-backed state and local projects. Scientists have felt attacked as he has reduced funding for the EPA, overturned the Clean Power Plan and rolled back vehicle emissions standards. In April last year, scientists and policymakers marched to demand that leaders like Trump enact evidence-based policy when it comes to the environment and climate change.

Similar to the above phrase.

“The words that we use ultimately describe what we care about and what we think are priorities,” Dr. Sandro Galea told The Independent, in response to the ban.

However, a spokesperson for the U.S. Department of Health and Human Services responded to criticism of the word prohibition, saying it was a “complete characterization.” Further, according to The Times, officials told the newspaper that the measure was more a “recommendation” of language to avoid, in order to make it more likely Republicans would approve budgets or funding.

Over the weekend, people have responded strongly to the word-banning measure, arguing in some cases that the move is a step back to the “Middle Ages.”

Words matter because they have specific meanings. Right now, the CDC is limiting its employees from using certain words in budget documents. But this could change the shape of critical research, hindering programs for years to come. https://t.co/TnV4avwg6a

Welcome to the Middle Ages. The Inquisition has begun, with a twist: #poverty is now a crime: Words banned at HHS agencies include “#vulnerable” “#inclusive”“entitlement,” “#diversity,” “evidence-based” & “science-based.” https://t.co/qefEM7XzJF Are you freaking kidding me?

First they ban people, then words. This is fascism. https://t.co/T5zwDkDVpi

If you are, know, love, or treat one of the 1,688,780 persons diagnosed with cancer each year, the banning of words “evidence-based” and “science-based” should get your attention. #cdc7 #censorship https://t.co/qZKG73usGq

Since when does a #POTUS dictate what words we can use? What happened to freedom of speech? https://t.co/7pzerQF5wZ

What do you think about the ban on words? Let us know in the comments!