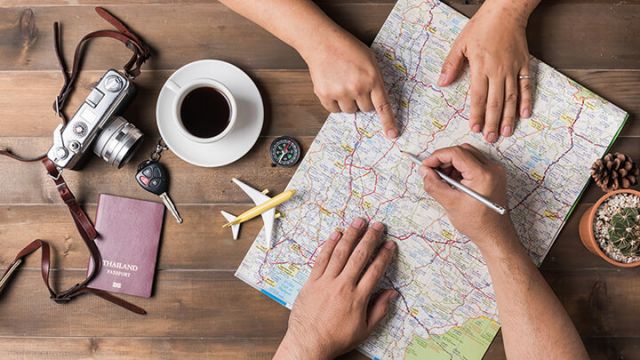 We all know some people just love to travel, but why? What makes some people eager to drop their lives and head to some exotic, perhaps dangerous locale just for kicks? Why do some people have that insatiable urge to explore, see new places, eat exotic food and throw themselves out of their comfort zones? Genes, apparently.

DRD4-7R makes some prone to travel

Specifically, some researchers suggest the DRD4-7R gene might be responsible for your itchy feet. Dubbed by some geneticists as the “wanderlust gene,” DRD4-7R might literally make some people more prone to travel.

Take it from Dr. Richard Paul Ebstein, professor of psychology at the National University of Singapore. Ebstein has been studying DRD4-7R for over two decades, and is convinced the gene plays an important role in driving people to seek out novel experiences — like travel. “I think overall the story is coherent,” Ebstein told the U.K.’s Daily Telegraph.

That’s right, when your college friend said they were born to travel, they might have been right.

However, there’s more to the gene than that, according to Ebstein. “We have evidence to suggest that the same allele [gene variant] involved in the personality trait of novelty seeking and impulsivity was also involved in being pro-risk in financial situations. People who have that allele appear to be more risk prone,” he said.

In other words, travelers are just part of a broader group of people who can be prone to all kinds of adventurous, potentially risk-taking behavior. However, Ebstein is far from alone in suggesting travel might have a genetic element.

As far back as 1999, researchers at the University of California found a possible link between the allele 7R and large scale human migration. They found migratory peoples were more likely to carry 7R than their more sedentary neighbors. In fact, the allele may even offer nomads a unique genetic advantage.

“DRD4 7R+ genotypes were associated with indices of better nutritional status among nomads, particularly higher fat-free mass,” Northwestern University’s Dan Eisenberg concluded after conducting a study in 2008. The study specifically looked at Kenya’s Ariaal people, some of whom are nomadic while others are settled.

This brings us to an interesting twist: while DRD4-7R appeared to benefit the nomadic Ariaal, it actually seemed to be a hindrance to their settled relatives. This might be because along with promoting travel, researchers noted DRD4-7R can also be linked to “increased impulsivity, ADHD-like traits, novelty-seeking like traits, aggression [and] violence.”

In fact, DRD4-7R is about much more than just travel. Along with a possible link with ADHD, the gene is also associated with increased drug use and promiscuity. Researchers suggested many of these traits could be assets for nomads, especially those who would need a strong sense of curiosity and adventure to keep moving, aggression to ward off rival groups, and novelty-seeking traits to take best advantage of their limited resources. On the other hand, these same traits may actually harm settled peoples, particularly those reliant on the routine of agriculture to survive.

It’s worth noting the science here is far from settled.

Even the biggest fans of the “wanderlust gene” admit they don’t know if nomads carry DRD4-7R because they travel, or if they travel because they have DRD4-7R. It’s a weird chicken or egg situation, where it’s very possible DRD4-7R is a product of a nomadic lifestyle, and not the other way around.

Moreover, John McGeary, assistant professor of psychiatry and human behavior at Brown University, argues that genes aren’t everything. He explained that while DRD4-7R might be associated with certain behaviors, just because you have it that doesn’t mean you’re a raging drug addict looking desperately for cheap thrills in some far off land. “It’s never an alcoholism gene or a wanderlust gene,” McGeary told The Huffington Post. “It’s little incremental pushes in one way or another.”

The way in which DRD4-7R nudges people towards adventurous behavior is surprisingly subtle, yet fascinating. Also speaking to The Huffington Post, University of California professor Robert Moyzis explained that people carrying DRD4-7R can have a “blunted” dopamine receptor. This means that it’s harder for them to experience feelings associated with dopamine, such as happiness, joy and exhilaration.

So while most people might be satisfied with the ups and downs of daily life, DRD4-7R carriers need more. This might be why they seek out more intense thrills, ranging from travel to drugs and alcohol. It’s worth mentioning that these people aren’t a small minority. The odds you have this gene are about one in five, with an estimated 20 percent of the population carrying DRD4-7R.

So if you’re reading this from a hostel while smoking your sixth or seventh joint of the day to wind down from some crazy adventure, you can stop worrying about the haters. You may well be doing exactly what you were born to do.