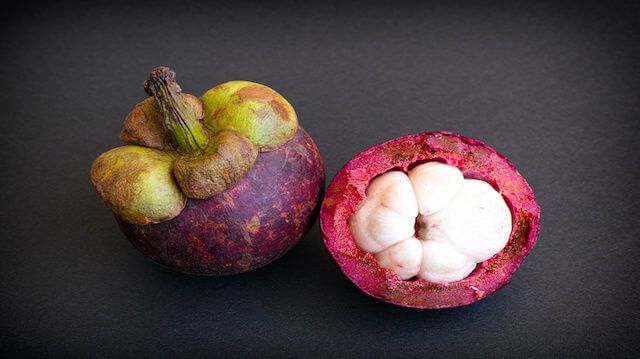 Have you ever heard of this powerful superfood? Mangosteen is one of the most underutilized foods today. This is likely because it is not found in the North American diet, at least in a fresh form you can find at your local produce market. However, it is sold as a powder, in supplement form and is included in many superfood powders on the market today. So, is it just another marketing ploy? What is mangosteen all about? It turns out that this exotic fruit is actually one of the most powerful antifungals that you can add to your diet.

Mangosteen is often referred to as the “queen of all fruits” because it’s incredibly high in antioxidants and healing powers. It does not come from, nor is it related to the mango. Mangosteen comes from an evergreen and is found in tropical rainforests throughout Indonesia, Malaysia, and the Philippines, along with parts of Sri Lanka and India. The whole fruit itself is a deep, dark purple color with a white, partly pink flesh with large segments, much like oranges. The seeds are white in color and inedible, but the flesh is packed with nutrition and has a mildly sweet, very tangy flavor.

Mangosteen is very low in sugar compared to most fruits, but very high in vitamin C and potassium. It is also one of the lowest calorie fruits, with only 60 calories per cup and 6 grams of fiber.

Mangosteen is also high in B vitamins including thiamin, folate (folic acid) and niacin, which all benefit metabolic, blood and brain health. Mangosteen is a great source of trace minerals, micronutrients for the body to nourish cells and promote cellular regeneration and energy. It contains high levels of copper, manganese and magnesium, which are very low in most fruits we have available to us today. These minerals assist with blood pressure regulation, healthy blood sugar levels, healthy red blood cell function, bone maintenance and healthy digestion.

However, beyond the nutritional stats on mangosteen, it is most well known for its ability to fight fungal infections of all kinds. Candida albicans overgrowth is a common type of yeast infection. Candida exists in the digestive tract of each of us, but the yeast can get out of hand when it is fed a diet high in refined sugar and grains, when we experience high levels of stress, or when we come into contact with viruses, fungi or parasites. These situations can lead to an overgrowth of yeast in the body which our good bacteria cannot compete with. One of the side effects of fungal overgrowth is known as a histamine intolerance.

Histamine intolerance is not as heavily discussed today as other reactions to fungal overgrowth, such as jock itch, athlete’s foot, etc. However, it is more prevalent than many people realize, and it is often mistaken for something else.

The body can experience symptoms of histamine intolerance when the immune system has been weakened by yeast, or a health issue such as an autoimmune disorder.

Signs of histamine intolerance include the following:

As you can see, many of these symptoms may be interpreted as being caused by other issues. Most people are surprised to find that their symptoms may actually be related to histamine intolerance. Histamines are completely natural; when the immune system feels it is under attack from pathogens, it will trigger a release of histamine in the body to fight back. However, when the immune system is under stress, it may release histamines inappropriately, and in this case foods containing natural histamines may cause a histamine overload.

Foods that are not high in histamines but trigger histamines in the body:

As you can see, some of these foods have significant health benefits which makes pinpointing a histamine intolerance very hard to do. However, if you’ve tried multiple diets and yeast prevention treatments and you still have recurring symptoms listed above, histamine intolerance is something you should look into.

My experience with histamine intolerance and mangosteen 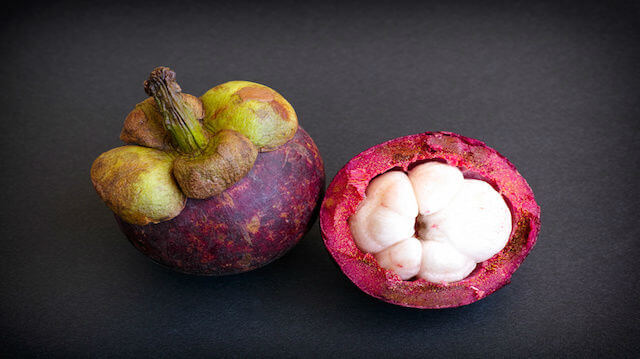 Unfortunately, most over-the-counter treatments do not help with histamine intolerance. I discovered this when, for no reason, I broke out into hives all over my body last year. I have struggled with candida all my life and I’d been in remission for years after adhering to an all-natural, no sugar and very low carb diet. However, my body suddenly broke out into massive hives all over my pelvic region. It seemed to get worse after certain meals, but I never could figure out why; I was eating a very allergen-free diet. Creams didn’t work for me and many actually made things worse. After trying at least 20 different natural and prescription options over the course of three months, I needed a solution.

When seeking natural remedies for candida and histamine intolerance, I came up short. Mostly because many foods recommended on candida diets cause histamine reactions in the body (fermented foods, cultured foods, fish, citrus, apple cider vinegar, coconut, etc.). Then I came across a recommendation for mangosteen powder. I was doubtful — how could it help?

Nevertheless, I decided to research mangosteen and give it a try. I’ve never seen it in local markets and would not consider consuming the whole fruit; my sensitivity to sugar means that fruit ferments in my digestive system causing a reaction. However, I found raw, organic freeze-dried mangosteen powder online and was delighted to see that it is very low in sugar. It also had excellent reviews from others that claimed it had helped their histamine intolerance. At the time, I had nothing to lose so I ordered some.

Within two weeks of using one teaspoon twice a day in a low-sugar, all-greens smoothie, I was rash free. At this point, I was convinced because I had made no other significant changes to my diet. I decided to go off the powder to test the theory and was floored. My rash came back, and this time it covered my whole body. So I delved more into the research behind mangosteen and histamines.

Here is why mangosteen helps with histamine intolerance:

Other benefits of mangosteen

Aside from histamine intolerance, mangosteen is also beneficial for…

Should you use mangosteen?

If you are looking for a natural remedy to fight fungal overgrowth, including a histamine intolerance, start with first removing sugar and all refined foods from your diet. This includes sweets, pastas, breads, and most snacks on the market today. Eliminate alcohol and fermented foods for a short time until your immune system improves. Implement a high-dose, dairy-free probiotic immediately to restore gut health. Then add in natural antifungal foods including mangosteen, oil of oregano, a digestive enzyme supplement, plant-based fats, and use stevia in place of all sweeteners until your system is under control again.

Try adding mangosteen powder to a smoothie with greens, hemp seeds, almond milk, chia seeds, ice, some superfood powder of choice, sugar-free plant-based protein powder, stevia and a teaspoon of coconut oil. Drink this daily to see if it works for you. I enjoy making mine thick and eating it with a spoon; I feel like I’m giving myself a healthy treat!

Ways to use mangosteen

Mangosteen can be consumed as a powder as described, as a juice (choose pure mangosteen juice) or if you can find the fruit, feel free to enjoy it that way too. You can also apply it topically, but it is most beneficial when consumed internally. Mangosteen supplements are also available, but many come with additives and fillers that do not support good health.

Fungal infections can cause a host of reactions in the body that call for our attention. A weakened immune system can lead to many, many health risks. To restore health, try implementing a whole-foods diet, including superfoods such as mangosteen. Use proven natural remedies instead of relying on chemical creams and treatments that only cover up the problem.

Have you ever tried mangosteen?

Heather McClees is a professional health journalist and Certified Holistic Nutritionist from South Carolina.She received her B.S. Degree in Nutrition Science and Dietetics, and is most passionate about helping others discover the gift of of holistic health, showing others how to create healthy recipes based on their favorite foods, physical fitness and yoga, and creative writing.