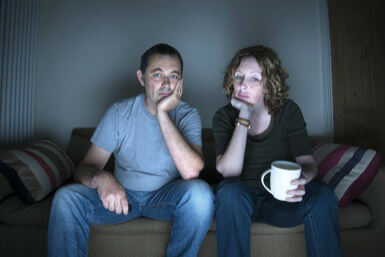 If you’re an avid couch potato, all of those hours watching TV could very well be making you ill, and may eventually cause your early demise.

An analysis conducted by the Harvard School of Public Health found that for every two hours per day spent in front of the television screen, the risk for type 2 diabetes was increased 20 percent. For cardiovascular disease, the risk increased by 15 percent, and there was a 13 percent elevated risk for general (all-cause) illness.

A 2012 Nielsen survey found that Americans watch an average of 34 hours of television each week. Study leader Dr. Frank Hu said that this amount is so high that cutting back to two hours per day would be a major improvement.

Hu notes, as numerous other studies have found, that extended periods of television watching is not just more time spent participating in a sedentary activity, but it’s more time spent consuming unhealthy foods including processed and fried foods, sugar-filled beverages and few fresh fruits and vegetables.

Although a higher incidence of cancer hasn’t been studied in relation to TV watching, Hu believes it is probably also linked.

The longer time in front of the screen, the higher the risk of developing disease; the risk of early death from any cause was said to rise even more with television watching of more than three hours per day, regardless of the weight of the individuals who participated in the study.

Hu also indicated that earlier studies have shown that children are more prone to obesity, unhealthy eating and a higher risk of metabolic syndrome with longer daily TV viewing.
A 2012 study published in the British Medical Journal suggested that the life expectancy of the U.S. population would increase by two years if Americans limited their channel-surfing to three hours or less each day; and it would be increased an additional 1.38 years by cutting TV watching to under two hours per day.

What to do instead of watching television

Some people have gotten rid of their TVs completely, which is an easy way to resist the temptation to watch too much. Most don’t even miss it after a while.

If you don’t want to do that, consider at least cutting back by adding other healthier activities to your daily routine:

Of course, if you really can’t tear yourself away from the screen, another option is to exercise while watching. Make a deal with yourself that you can only watch more than two hours of television if you’re physically active while doing so; walk or run on a treadmill, ride a stationary bike, dance around or do household chores – just start moving more! Isn’t your life worth it?