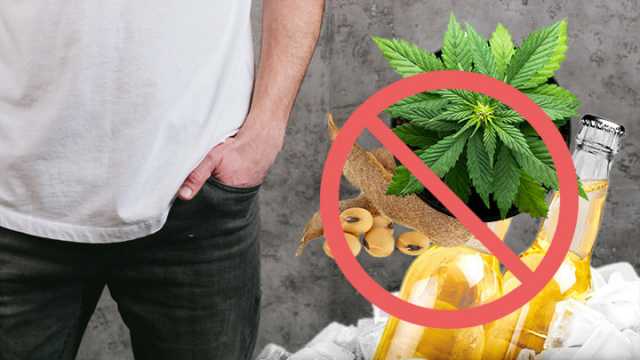 If you’re male and you haven’t done this already, get to know your testes. All men should know how their testicles feel and report any changes to their physician. If you’re experiencing testicular atrophy (shrinking testicles) you’re probably a little frightened and wondering what the heck is happening. Let’s delve into possible reasons and solutions for shrinking testicles.

Most understand the importance of a good night’s rest for overall health. But if your testicles are shrinking, it could be due to a lack of sleep. A study from the University of Southern Denmark found a link between quality of sleep and testicle size. Researchers conducted a cross-sectional study that included 953 young Danish men from the general population. Researchers studied sleep schedule, interruptions in sleep and sleep habits. The men’s testicles were also measured. Researchers also took sperm and assessed for sperm count and viability.

It turns out that sleep-deprived men actually have lower testosterone levels. They also have reduced sperm counts — not to mention, testicle shrinkage. In those men who suffered from insomnia, staying up late or had inconsistent sleep throughout the night and woke up often, researchers found that sperm counts dropped by 29 percent. Additionally, sperm was more deformed and testicles were smaller.

Cool it on the booze

If you are a lover of beer, wine or liquor and you’re noticing shrinkage “down under,” listen up! An animal and human study published in Sciencedirect found that chronic alcohol consumption caused changes to Leydig cell shape and function. These cells are located adjacent to the testicular seminiferous tubules (where sperm cells are produced). Alcohol causes the tubules to shrink. Additionally, the processes involving the way alcohol alters testicular energy metabolism and sperm cell mitochondria leads to cell death. Together, these processes eventually lead to testicular shrinkage in both animals and humans.

However, the study was primarily created to see if testicles could “bounce back” to their original size through alcohol-abstinence. And the good news is, if you stop drinking, or even reduce your chronic intake of alcohol, your testicles will likely regain their full size.

Aluminum can be found widely throughout our daily lives. In fact, it’s the most abundant metal in the earth’s crust. Aluminum is used to make food and beverage cans, pots and pans, airplanes, siding and roofing, foil and a variety of consumer products such as:

Aluminum compounds can also be found in water treatment, pharmaceuticals, utensils and food additives. So, this makes it difficult to avoid exposure. The problem is, overexposure to aluminum may contribute to a low sperm count and infertility in men, with a side effect of smaller testicles. A study published in the International Journal of Toxicology and Applied Pharmacology reviewed the toxic effect of aluminum exposure on the male reproductive system.

Researchers found a link between exposure and adverse effects on sperm motility, viability and count, histology of testis and epididymis (duct behind the testis) as well as reproductive hormone levels. Exposure may also lead to oxidative stress in the testicles, causing cells to die and the testicles to shrink.

Just the mention of getting kicked in the gonads can cause a man to wince. That’s because testicles have the most pain receptors concentrated in any one area of a man’s body, with nerves extending to the ears, stomach and groin. Because the testes are located within the scrotum, which hangs outside of the body, they’re not protected by muscles and bones, says the Cleveland Clinic. That means it’s easier for testes to be struck, hit, kicked or crushed, which happens most often during contact sports.

In a study by the Department of Radiology at Addenbrooke’s Hospital and the University of Cambridge, researchers found that trauma to the scrotum is not only a cause of testicular atrophy but may also affect testicular size months or years following an injury. Researchers performed clinical and sonographic examinations in 10 patients who had suffered blunt trauma to the testicles. A significant reduction in volume of the injured testis was found in five out of 10 cases.

So, while most men don’t experience such trauma daily, athletes should make sure they are well-protected by wearing athletic cups during sports and even skateboarding.

Although studies on weed and its effect on reproductive hormones have been conflicting, some studies suggest that chronic marijuana use may lead to lower testosterone levels and a reduction in testicular size. Apparently, shrinking testicles have been observed in rodents and dogs after being administered cannabis extract. According to a study published in the Journal of Clinical Pharmacology, THC (the main active compound in marijuana) is apparently to blame. But, the research is relatively outdated.

Nevertheless, although outdated, the study suggests that smoking weed lowers testosterone levels, either directly or through precursor hormones. Or, it causes testicular atrophy in animals. So, if you’ve noticed a difference in testicular size and you’re a chronic smoker, it’s best to try and stop.

Cool it on the soy

The benefits and dangers of soy may be up for debate. But one of the more disturbing claims is that soy “feminizes” men. While soy milk provides many potential health benefits, including a lower risk of heart disease and protection from prostate cancer, some research suggests it may have negative side effects for men when consumed frequently. In fact, soy is even thought to shrink testicles and lower testosterone levels.

Soybeans are rich in phytoestrogens. The chemical structure of phytoestrogens is very similar to that of the human sex hormone estrogen. This similarity allows phytoestrogens to sometimes mimic or hinder the hormone with estrogen receptors.

Testicular atrophy, or shrinking balls, are most commonly associated with steroid use. Anabolic steroids are synthetic types of the male sex hormone testosterone. Some common names for anabolic steroids are gear, juice, roids and stackers. A medical professional may prescribe steroids to treat hormonal issues, such as delayed puberty. They can also treat diseases that cause muscle loss, such as cancer and AIDS, suggests the National Institute of Drug Abuse (NIH).

The problem begins when some athletes and bodybuilders abuse steroids to boost their performance or improve their physical appearance. With that may come more than you bargained for. According to the NIH, steroid use may also:

When to visit your doctor

More than likely there is a simple reason behind your shrinking testicles. However, if shrinkage is accompanied by pain or diminished libido, visit your doctor. You may also want your doctor to test your testosterone to estrogen levels. Take charge of your health. Shrinking testicles may seem scary and embarrassing. But, being proactive will help prevent any long-term complications.