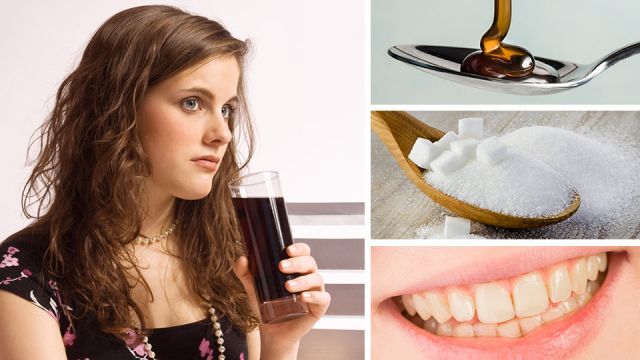 As a nation, we drink a heck of a lot of soda. According to the CDC, 63 percent of youngsters and 49 percent of adults drink a soda (a.k.a. sugar-sweetened beverage) every single day. That’s more than half of the entire U.S. population getting 150 empty calories 365 days a year. Close to 55,000 annual calories that are doing us damage.

See, I used to be one of those “soda statistics.” I’d come home from school on a hot day, sit down and immediately crack open a deliciously cold can of Coke, glistening beads of water on the outside just like in the ads. If it’d been like in the commercials, with me wearing a skimpy bikini and splashing in the waves with other Coke-wielding partygoers, it would have been an inspiring sight, I’m sure.

But when I think about myself sitting there on the couch and glugging back a can of liquid poison, I just feel sad. Sad that I exposed my body to such a travesty each day, and sad that it was slowly but surely building into a sugar addiction.

And then one day I broke free. I’d always known that Coke and other sodas weren’t good for one’s health, but that fact had never really bothered me. Then, with my 20s looming just around the corner, I knew it was time to kick a bad habit, and I stopped. It wasn’t easy, but reminding myself just how harmful soda really is helped me to stay on track.

Ten years on, and I’m still soda-free. Here’s while I’ll never go back.

Alright, you know soda is sweet — big whoop. But do you know just how sweet? Try 10 teaspoons worth of sugar in every can of soda. If you don’t think that’s much, try plonking ten spoonfuls of sugar into your coffee tomorrow morning. Chances are, it’ll be completely undrinkable. If you enjoy it, I think you’ve got a problem!

This massive influx of sugar spells seriously bad news for your health. Don’t believe me? Just take a very brief look at the scientific literature and you’ll think otherwise. This 2006 study, for example, states that sugar-sweetened beverages “may be a key contributor to the epidemic of overweight and obesity.”

Another study noted that soda consumption is associated with an increased risk of type 2 diabetes. A study published in 2010 linked soda consumption to metabolic syndrome, while another article published in the same year drew strong ties between soda and cardiovascular disease. You get the idea. All that sugar crammed into one tiny can could wreak havoc on your body.

Ever wonder why Coke and other sodas taste so darn good? That’ll be the high fructose corn syrup. Almost every soda on the market contains bucketloads of this stuff, and it can do some serious damage in your body.

High fructose corn syrup is many times sweeter than table sugar, making it the ideal candidate for including in a can of pop. The problem is, our bodies don’t process high fructose corn syrup (HFCS) the same way as simple sugar (glucose). HFCS fails to stimulate insulin secretion and sidesteps leptin production, thereby increasing the number of calories absorbed and the amount of weight gained from a single can. You’d probably be better off sipping on a can of straight sugar than drinking this stuff!

You might be thinking, “This is all very well, but I only drink diet soda — that doesn’t have any sugar in it.” True, but there’s potentially something much worse lurking in that can of diet soda.

Most of these kinds of beverages, Diet Coke in particular, contain a compound aspartame. Aspartame continues to spark considerable controversy in the scientific world, with some scientists maintaining that there are no proven harmful effects, while others list a whole host of adverse effects from consuming this ingredient.

Personally, I’m inclined to jump on the anti-aspartame bandwagon. Documented cases show that it can cause nausea, headaches, dizziness, vomiting, hearing loss, tinnitus, liver damage and even neurological issues. The jury might still be out on aspartame, but are you really willing to take the risk?

All soda contains phosphoric acid, which in the words of Coca-Cola “is used in sparkling beverages to add tartness to the beverage.” Considering phosphoric acid has the potential to elevate risk of osteoporosis, it’s debatable whether adding in this ingredient was really worth the health costs.

A number of studies agree, with children and postmenopausal women being at highest risk of developing osteoporosis and other bone disorders from consuming phosphoric acid-containing sodas.

On its own, caffeine isn’t necessarily a bad thing. But caffeine is a stimulant, and often works in tandem with other stimulants to increase their effects on the body. Sugar, as it happens, is also a stimulant, meaning the caffeine in that can of soda you just knocked back is dramatically amplifying the diabetes-inducing effects of the high fructose corn syrup. Uh oh.

And then there’s the fact that it gets you wired. I often see people drinking soda during their 3 p.m. “tea break” at work, or even sipping on a can of Coke on their way home from work. Those same people are regularly complaining about how they struggle to get to sleep at night… could it be that caffeine lurking in the soda? You bet it could.

Life without soda is so much sweeter

There’s plenty of other reasons why I have absolutely no regrets in ditching soda: the hefty price they can fetch over time, for instance, and the fact that I’m proud of boycotting companies like Coca-Cola and Pepsi. These are companies that have exploited the masses for decades, destroying the health of millions and making billions in the process. And most of all, there are many far more enjoyable things to drink… beverages that don’t come laden with adverse side effects! Life is definitely sweeter without soda.