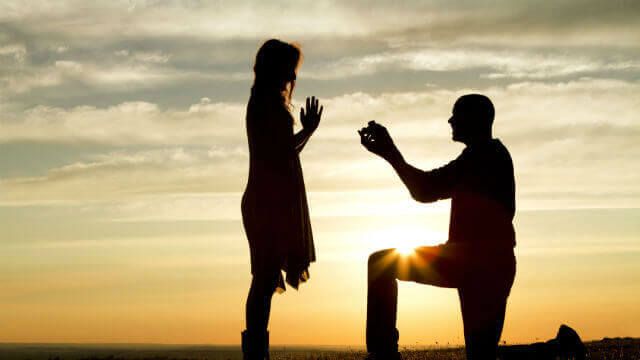 Some people have used their furry friends to help pop the question. Well, not literally, but a dog did once present a proposal with a sign around his neck. In another case, “Will you marry me” was stamped on a pet’s licence.

There have also been numerous etchings – in spoons, on dishes, and on game pieces. Cakes have had the proposal scrolled in icing, rose petals have spelled it out, and it has been written in the sand. Sweet…. but boring.

It seems as though marriage proposals have gotten a bit strange. It also seems, the stranger, the better. Read on to see how strange some of them have actually been.

Lip sync. One man, Isaac Lamb, had 60 of his friends and relatives lip sync to Bruno Mars’ “Will You Marry Me.” He had the whole thing choreographed. She watched while listening to the music with headphones on in the back of his SUV.

At the end of the song, everyone parted and Isaac walked through the crowd and asked for her hand in marriage. She said yes and the video went viral on YouTube.

Hacker. Bernie Peng, who is a programmer, hacked into his girlfriend, Tammy’s, favorite computer game, Bejeweled. When Tammy reached a particular level, the marriage proposal showed up on the screen. The makers of Bejeweled liked the idea so much, they paid for the couple’s honeymoon.

Tattoo. There have been many men who have tattooed a marriage proposal on their bodies. Some on their shoulders, or across the biceps, on the inside of the wrists and even across the back. What’s even stranger is that her answer can sometimes be found tattooed right under the proposal.

Here’s a question… what if she says no?

Urinating?? Reportedly, one guy actually scrolled, “Will you marry me?” in the snow, and yes, it was yellow.

Porpoise. One couple had gone swimming in the ocean when a porpoise came along with a life preserver in his mouth. Stamped on it was, “Will you marry me?”

Log flume. One creative gentleman had taken a ride on a log flume with his girlfriend and two of their friends. When it was time for the picture to be taken on the ride, the guy and his two friends flashed the proposal up for the camera. His girlfriend didn’t see until it was time to view the pictures at the end of the ride.

Milkshake. A lot of men do the cliche thing and put the engagement ring in a glass of champagne. The champagne is clear and one is able to see the ring in the glass. Well, one man who wanted to do things a bit differently thought it would be cool to put the ring in a strawberry milkshake. Well, his girlfriend had a race with her friends to see who could drink their milkshake the fastest. Needless to say, she sucked that ring right down.

The woman had to go to the hospital to have herself X-rayed, and there she saw it in her belly. With time it came out, but the thought of what she had to go through to find it… ewwww.

Falling. One man thought it would be funny to fall off a building in front of his girlfriend. He staged the whole jump, with his friends contributing to the prank. When he “accidently” fell, his girlfriend looked over to see that he had fallen on a soft object, and the message, “Will you marry me?” was on the ground.

Superman. A young man dressed up as Superman, and was hoisted up in the air 19 stories with a crane while he was holding onto 9,999 balloons (that is a superhuman feat in itself). While his girlfriend was walking by, people were telling her to look up in the sky… it’s a bird, it’s a plane… actually it was her boyfriend floating down to the ground with a ring in his hand.

Flash mob. A sweet young man planned a huge marriage proposal for his girlfriend in the park. Her friend had her sit at a table facing the park grounds. Music started playing and one by one, dancers gathered together and started dancing in front of her. When the song was over, a marching band marched out to her playing yet another song.

By this time, the young man’s girlfriend was so overcome, she started crying. When the band had finished playing, the sweet man came out from the band and proposed to her in front a park filled with people.

Flying. A pilot had decided to fly to New York with his girlfriend. They had wanted to take in the New York skyline. While they were flying, there seemed to be some technical difficulties. The pilot told his girlfriend not to panic, and to look at the flight instructions. While she was reading them to him, she turned the last page and found the words, “Marry me?”

Tiny robot. One tech-savvy guy constructed a small robot that asked his girlfriend for his hand in marriage (the creator of the robot’s girlfriend, not the robot’s). After the question was asked, a ring popped out from its chest. Just a side note, the maker of the robot posted instructions on how to build his robot on the internet… in case you want to go this route.

Some people go over the top when it comes to marriage proposals. Gone are the days of just getting down on one knee. The crazier the proposal, the better the reaction… right?

By the way, every one of the above-listed proposals received a “yes.”