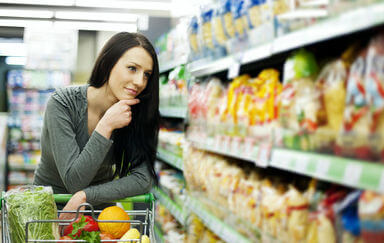 You probably already know it’s a bad idea to shop when you’re famished; everything starts to look good, and before you know it, your cart is filled with items that may not be the best for your health. This is just one of the reasons ‘never grocery shop when you’re hungry’ is one of the three golden rules.

A recent study, confirmed what we already knew. Those who shop while they’re hungry choose the highest calorie foods. Researchers sent two groups of people into a simulated grocery store. One group was given a snack first, the other group hadn’t eaten for five hours. Both groups picked about the same amount of food, but those who were hungry picked foods with significantly more calories.

In the second phase of the study, the researchers followed people into an actual grocery store. This also confirmed that those who shopped when they were hungry chose the more calorie dense foods.

So now, scientific research reveals that the old adage is true, never grocery shop when you are hungry. By keeping some nuts or seeds on hand for those times you suddenly realize your cabinets are empty, you can stave off that hunger enough to prevent making bad choices at the store.

If you frequently read the articles here at The Alternative Daily, you probably already know that not getting enough sleep can increase your appetite. This is because the body produces less leptin, a compound that signals satiety and suppresses the appetite; decreased levels of leptin often equal more cravings for high carb foods. The hormone ghrelin also usually rises after a lack of sleep, which can further increase hunger.

So it may really be no surprise that a new Swedish study  has found that sleep deprivation can influence what we buy at the grocery store.

The authors believe that the results suggest “that increased food purchasing in the morning after nocturnal wakefulness may represent another mechanism through which a repeated or chronic lack of sleep, e.g., through shift work, promotes weight gain.”

Interestingly, this small study did not show that the levels of leptin had decreased or that gherlin had increased; instead, they believe that the lack of sleep left the brain more vulnerable to impulsive decision making.

Going shopping when you’re bored, rather than out of necessity, almost always leads to choosing items you don’t need. Heading to the grocery store with a list of specific food items helps you to stay on track, filling your cart with healthy choices. It’s also a good way to save money.

Shopping is a very expensive form of entertainment, and it can also harm your health by enticing you to spend your hard earned money on junk food. Stores use clever displays, sights, sounds, smells, demonstrations and other techniques to try and get customers to buy.

Following these golden rules for grocery shopping will help you to achieve a slimmer waistline and optimal health that much quicker!