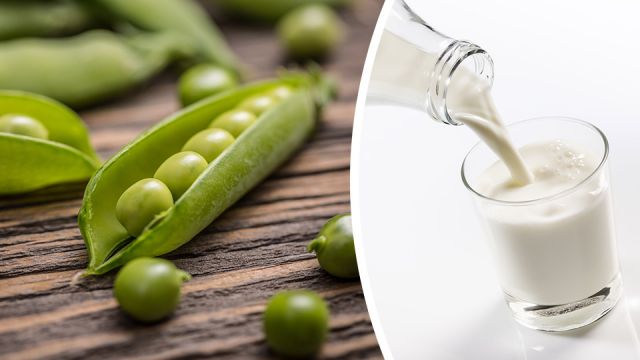 If you were one of those kids whose mom tried everything she could to get you to eat peas, you might be surprised to learn about the latest non-dairy milk craze. That’s right; we’re making milk out of peas now. But these little powerhouses pack a large punch of protein that has us paying attention.

Peas contain a natural sweetness and most of the pea milk on the market today contains very little sugar. What sugar it does contain is cane sugar, not high fructose corn syrup. According to Dr. Frank Lipman, founder of Eleven Eleven Wellness Center in New York City, when dairy milk producers remove fat from whole milk, they add sugar to compensate for it. Ripple contains six grams of sugar, while Bolthouse Farms contains just five grams, compared to 12 grams of sugar in a cup of two percent milk. Both versions also contain zero milligrams of cholesterol, which is something that two percent milk can’t compete with — there are 20 milligrams of cholesterol in each cup.

One of the biggest benefits of pea milk is it offers a plant-based alternative to dairy that doesn’t include nuts and is gluten-free. It’s a healthful substitute to dairy for those of us with nut allergies. It also doesn’t contain carrageenan, a nutrient derived from seaweed that can cause inflammation. However, if you are allergic to sunflower oil, steer clear; both Ripple and Bolthouse Farms pea milk contain sunflower oil to thicken it.

Because we knew you were wondering if we’re talking about green, pea-tasting milk. It doesn’t taste like its main ingredient either, which isn’t the case for coconut and almond milk. And no, it’s not green. Both Ripple and Bolthouse Farms Unsweetened Pea Milk is mild and tastes about like you’d expect any unsweetened plant-based milk to taste. I find it’s a nice substitute for milk in recipes and as a cream substitute for my tea.

The staff at GQ actually sampled all four versions of Ripple’s pea milk with hilarious commentary. The original pea milk made writer Jeff Vrabel immediately think about “repurposing it as a coffee creamer.” He and his colleagues didn’t care for the unsweetened version and missed the sweetness of the original just two sips in to its taste test. The vanilla version garnered much praise from the editorial team, who rated it as the best of the four, while the chocolate tasted “somehow plant-y” to them. The best way to decide on the taste, though, is to try some pea milk for yourself.

Not only are peas nutritious, but they — and other pulses like lentils, chickpeas and beans — have the lowest carbon footprint of any food crop. Not only do they require less water than it takes to produce dairy milk, but peas give nutrients back to the soil in a mutually beneficial relationship.

There are a few things to consider when shopping for pea milk. Like most non-dairy milk options, it’s more expensive than dairy milk. It’s also made from a legume and thus not Paleo. However, the unsweetened version is perfect for people on a ketogenic diet as it contains zero sugar.

Finally, because it’s made from plant material, pea milk is an incomplete protein. As such, it is not a total substitute for dairy milk. If you eat meat, then it shouldn’t be a problem. However, vegans will need to continue to supplement their diet with ample plant-based protein for optimum health. Overall, pea milk offers us yet another alternative to dairy milk, and that’s something to be excited about.

Have you tried pea milk? What do you think?