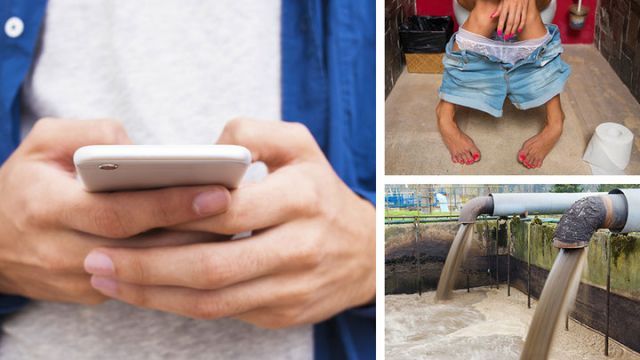 Does the wastewater from your toilet contain dirty little secrets that you wouldn’t want anyone to know about? Surprising as it may seem, epidemiologists are exploring ways to tie cell use data to illicit substances in the raw sewage that ends up in waste management plants.

Cell phone data and tracking illicit substances in your pee

Right now, there’s no way that forensic scientists can use this technology to bust you for having drug residue in your pee. But health officials believe they’ll be able to use this method to more accurately track and gauge just how much cocaine, ecstasy and marijuana a given town or city is consuming.

Is this part of a trend towards Big Brother in the bathroom? The epidemiologists developing this approach insist their goal is not to invade individual privacy, but rather to gain insight into collective habits that will help them do their job of promoting public health.

Here’s how their program would work: Every day, town and city populations fluctuate due to a variety of factors (such as tourism). So does the concentration of illicit substances that end up in the wastewater. In the past, scientists had no reliable way of accounting for population fluctuations. However, by tracking cell phone usage in a given municipality or region they can now more precisely know how many people are flushing toilets daily in a particular town or city. That info helps epidemiologists better measure illicit drug usage in the areas they are studying.

The scientists at the Norwegian Institute for Water Research studying this issue claim their approach isn’t just about tracking an epidemic of cocaine usage, say, but also about protecting the population from exposure to pollutants and toxic chemicals. But is this technology yet a further symptom that privacy is being eroded on all fronts? Here are a couple of related developments:

Fish are getting high from human pee

Epidemiologists do have legitimate reasons for studying what goes into wastewater. For one, it could help scientists understand how exposure to toxic chemicals is impacting public health.

In addition, there are environmental considerations. For example, marine experts say that American fish are showing signs of getting high because they are exposed to intoxicants in human pee. As one researcher explained the problem, “We just don’t have a good way to understand how the fish population is reacting to these drugs.”

For some, using cell data to track wastewater is a sign that privacy is going down the drain. For others, it’s a way for scientists to get to the bottom of legitimate public health concerns. What do you think? Let us know in the comments section below!