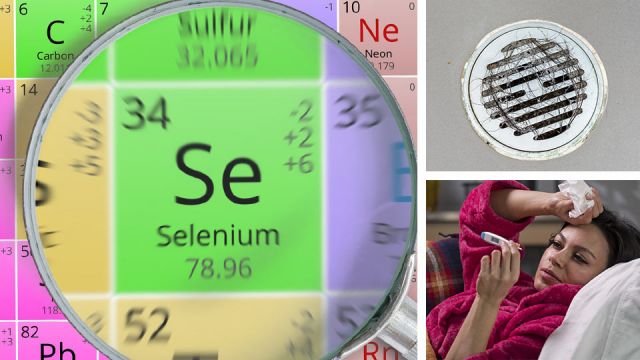 Selenium is a trace mineral you’d probably know nothing about until you’re deficient in it. It’s found naturally in the soil, pops up in the occasional food, and is present in low concentrations in water…and it’s critical for your existence.

While you may not need selenium in the same mammoth quantities as the likes of vitamin C or D, our bodies need it to function all the same. Selenium plays an important role in immunity, reproductive health, thyroid function, DNA synthesis, and antioxidant synergy.

So how much selenium is enough? Obviously, that number varies from person to person, but the recommended daily selenium intake for an adult is 55 mcg. This is a tiny amount compared to other vitamins and antioxidants, but it doesn’t take much for your body to become deficient in selenium — especially if you eat a limited diet, regularly smoke or drink, or even take birth control pills.

And if you’re not getting enough selenium, your body will start crying out for help. Here’s how to look out for those signs, so you can quickly treat that selenium deficiency before it does some real damage.

It’s one thing to feel tired at the end of a long week or if you didn’t sleep well the night before, but if you’re constantly feeling fatigued for no apparent reason…it could be due to a selenium deficiency. As I mentioned earlier, selenium and the thyroid gland have a close connection, with selenium helping to convert T4 thyroid hormones into the more bioavailable form of T3. Research shows that a common symptom of selenium deficiency is impaired thyroid function (hypothyroidism), and this often manifests as a form of chronic fatigue.

2. Your hair is falling out at an alarming rate

Everyone loses a certain amount of hair each day, but it’s usually not enough to clog the shower drain. Not so if you have a selenium deficiency. As with the constant tiredness, rapid hair loss can be due to an underactive thyroid, which in turn can be caused by a lack of selenium in your diet or an inability to synthesize selenium in your digestive tract.

While a few strands of hair in your comb each day isn’t a cause for concern, if there are great clumps of the stuff falling out then you should start asking questions – but remember that the causes of rapid hair loss are numerous.

3. You’re not as fertile as you should be

While this particular sign of a selenium deficiency isn’t exactly an obvious one, if you’ve been trying to start a family and wondering what’s going wrong, it’s possible that a lack of selenium is contributing to the problem. This study, for example, showed that 50% of male rats placed on a low selenium diet had impaired sperm with impaired motility and with a tendency to be weaker than normal.

4. You’re putting on a lot of weight

If you’ve cleaned up your diet, getting plenty of sleep, and you’re exercising regularly but still putting on a lot of weight, selenium deficiency could be to blame. Once again, it’s that important role selenium plays in healthy thyroid function which is at the root of the problem, so consider getting your selenium levels checked out if that muffin top just keeps getting more muffiny.

Are you one of those people who’s always recovering from a cold or flu? Are you usually the first one in the offie to succumb to a bout of sickness that’s going around?  It could be due to a lack of selenium in your diet. Research shows that low dietary selenium decreases the body’s ability to respond to foreign invaders with antigen-killing T-cells. A slower or lower T-cell response means you’re more prone to infection, and therefore more likely than most to come down with a cold, flu, or other type of bacterial or viral infection.

6. Your liver is overrun

Once again, this might not be an overly obvious sign at first, but if your body (and especially your liver) is struggling to break down and eliminate toxins, a lack of selenium could be contributing to the problem. The body requires certain levels of selenium consumption to produce selenoproteins, one of the more important of which is glutathione peroxidase. Glutathione peroxidase is a critical compound used by the body to metabolize harmful toxins into harmless byproducts. The less circulating GP there is, the less toxins are removed and the harder your liver has to work to reel in the slack.

7. You’ve got a problem with your heart

This means that, if you’re short of breath or showing signs of cardiovascular complications, it’s worth getting your serum selenium levels checked out.

If you suspect you have a selenium deficiency, get tested

While it’s an important antioxidant in its own right, selenium is a fickle beast — too little and your body stops functioning as it should, but too much and it can become toxic. With this in mind, it’s best not to play with fire: if you suspect you have a selenium deficiency, always consult a doctor and get blood tests done before supplementing. With blood tests in hand, your doctor can prescribe the correct selenium dosage without putting you at risk of toxicity.