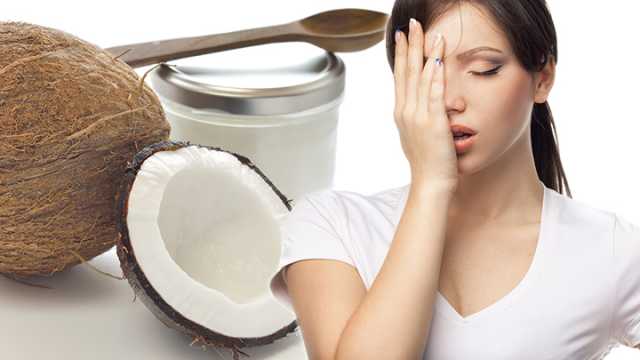 Personally, I’m one of coconut oil’s biggest fans. I moisturize my face and hands with it, use it as a mild sunscreen, style my hair with it, swish my mouth with it, cook with it…and eat great spoonfuls of it straight out of the jar. Sometimes I worry that I might actually turn into coconut if I eat just one more dollop of the stuff.

It might seem trivial, but I have no doubt that my life would be a whole lot less enjoyable without coconut oil. To me, it’s one of nature’s true superfoods. How many other foods can you cook with, eat and use as a full-body beauty product? The amazing thing about unrefined coconut oil is that it not only smells good, but has a delicious slightly-sweet taste that makes it a dynamite fatty ingredient in any baking recipe.

And just as coconut oil enriches my life, so too can it improve the lives of others…particularly those suffering from common and debilitating health conditions like adrenal fatigue. Read on to find out all about coconut oil, why it’s so amazingly good for you, and how it can treat adrenal fatigue plus plenty of other ailments.

Coconut oil: what’s all the fuss about?

To date, there are well over 1,700 scientific articles examining the health benefits of coconut oil. That’s not by coincidence. Researchers have been piecing together the secrets behind coconut oil’s therapeutic powers for years, and the more they discover the more they’re dazzled by its brilliance.

But what’s in a jar of coconut oil? What makes it so darn special? The short answer is saturated fat, and lots of it! And despite you’ve been told up until this point, it just so happens that our bodies need saturated fat in order to function efficiently. No, saturated fat won’t make you fat, but it could very well do the opposite!

The truly unique thing about coconut oil is its impressively high concentration of medium-chain fatty acids (MCFAs). The MCFAs found in coconut oil are composed largely of caprylic acid, lauric acid and capric acid. These fats are far easier to digest than most of the other forms of fat found in the typical American diet, making them an excellent energy source that is almost never stored as fat. Not only that, MCFAs have antibacterial properties, can penetrate and “feed” our cells much more efficiently than most other compounds, and they don’t put the liver under unnecessary pressure like certain other fats.

Adrenal fatigue is a highly contested condition within the medical arena. Some say that adrenal fatigue is a very real condition, caused by an “exhausted” adrenal gland that needs a vacation after producing the stress-induced hormone cortisol for too long. More stress means a higher likelihood of adrenal fatigue, and because stress levels continue to rise within the everyday life of most Americans, it’s a very plausible explanation.

Others claim that, because there’s no hard evidence to support the notion of adrenal fatigue, it isn’t technically a medical condition. But if you constantly struggle to get out of bed in the morning, are constantly tired and have almost continuous brain fog, then the idea of adrenal fatigue explains a lot. Personally, I think that just because adrenal fatigue doesn’t slot conveniently into the medical world’s idea of a “condition,” doesn’t mean it doesn’t exist. Millions of people around the world would agree.

So, how to deal with this all-too-real adrenal fatigue problem? Well, there’s plenty of simple, holistic things you can do to treat the symptoms…one of which just so happens to be coconut oil!

The reason behind this is those medium-chain fatty acids I talked about earlier. Because they’re easily digested and utilized by the body, they provide a much-needed source of clean energy to help support your overworked adrenals and assist you in getting through your day without feeling constantly tired and sluggish (and perhaps a little thuggish!). MCFAs, otherwise known as medium-chain triglycerides (MCTs), also assist with improved brain function, assist with low thyroid problems, help to regulate weight imbalances often associated with adrenal fatigue, and support healthy liver function.

There’s no wrong way to use coconut oil for adrenal fatigue. Simply replacing inflammatory hydrogenated vegetable oils or margarine for cooking is a great step in the right direction. Next, instead of using butter in your baking recipes (although I’ve got a lot of time for grass-fed butter!), tag in with some coconut oil instead. It makes a great replacement on account of its natural sweetness, meaning you won’t need to use as much sugar. Finally, consider simply doing what I do and shoving a spoonful of extra virgin, organic coconut oil straight into your mouth every day. It’s not as gross as it sounds, once you get over the oily sensation!

Research shows that coconut oil can help to reduce inflammation and effectively treat the symptoms of arthritis. In a study that fed virgin coconut oil to arthritic rats, coconut oil was shown to have a beneficial effect on arthritis in rats “due to its antioxidant and anti-inflammatory effects.”

Believe it or not, the high concentration of saturated fats in coconut oil make it an excellent choice for those worried about high blood pressure or heart disease. Eating more saturated fat increases HDL cholesterol, otherwise known as “good” cholesterol. More HDL means less LDL (“bad”) cholesterol, which is a definitely a good thing for your cardiovascular health.

The mechanism by which coconut oil can treat and even prevent cancer is twofold. First, the ketones in coconut oil contribute to ketosis, a metabolic shift in which the body begins to burn fat for energy rather than glucose. In a ketogenic state, it is thought that carcinogenic cells begin to die out, as they are no longer able to access glucose, their primary food source. Secondly, the antibacterial properties of coconut oil can kill off pathogenic bacteria that have been shown to contribute to certain types of cancer.

The benefits of coconut oil certainly don’t stop there! Check out this article to find out more about this wonderful superfood or take our coconut oil challenge.