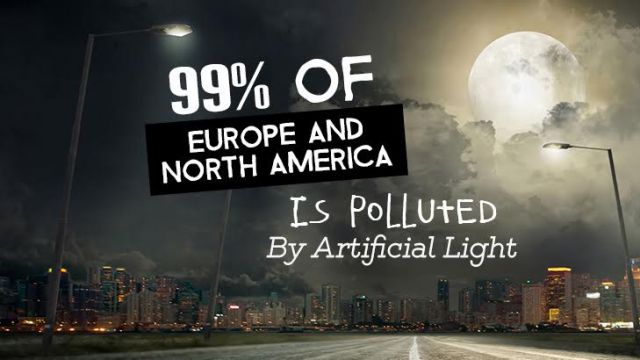 A recently released study has determined that almost all of us live under the bright haze of artificial-light pollution. The study, which was released in Science Advances on June 10, 2016, determined that over 80 percent of the world’s population lives in what are considered light-polluted areas, and that percentage skyrockets to 99 percent for European and North Americans. The study also showed that the Milky Way is invisible in the night sky in over 60 percent of Europe and over 80 percent of North America, but is visible to two-thirds of the planet as a whole.

The impacts of an increasingly illuminated planet is the focus of work done by International Dark Sky Association (IDSA), an organization based out of Arizona that works to research and educate the public on the impacts that light pollution is having on humans and the world around us.

Cloudy skies at night in our lit-up world are hundreds and possibly thousands of times brighter now than they were a century ago, and this is having an impact on wildlife.

Birds also rely on seasonal cues from the environment that tell them when and where to migrate, but these cues are also thrown off by the emergence of increasing synthetic light.   The light from cities also draws birds toward them, and they often collide with buildings that are lit up at night.

Nocturnal animals, such as owls, also have hunting and reproduction schedules that are thrown into disarray when nighttime becomes less distinguishable from daytime. Many species of snake rely on moonless nights to hunt, but with our increasingly bright nighttime sky, the proper conditions for their hunting occur less frequently.

The impact light pollution is having on wildlife is also impacting mammals, such as humans, particularly the ones found in North America and Europe.

We rely on a circadian rhythm to subconsciously guide our body’s sleep patterns and hormone regulation, but the emergence of artificial nighttime light as an increasingly present part of our lives can throw this rhythm off.

As many are becoming more aware, however, it isn’t all artificial light that is throwing off our circadian rhythm, but specifically blue light. Unfortunately, while new iPhone features allow you to reduce or eliminate blue-light glare from your phone, blue light is often given off via energy-efficient light bulbs that you may be using in your home.

Frustratingly, the compact energy-efficient fluorescent bulbs many us now use give off more blue light than the older incandescent bulbs. It’s probable that many of you reading this did not realize this was the case and are at this moment thinking about all the energy-efficient light bulbs you have on in your home at night. Sorry, but those bulbs could be throwing your sleep patterns into disarray.

Many pessimistic experts are stating that the reason energy-efficient light bulbs actually produce more blue light is because life isn’t fair and the universe enjoys throwing unexpected obstacles in our path.

The IDSA disputes that we need nighttime lighting to improve visibility on roads and that increasing lighting in our cities at nights makes our streets safer. They point to a 2015 study that showed no correlation between lighting on roads and traffic accidents. Another study the association points to, one based out of Chicago, actually showed increased nighttime lighting in cities can cause a rise in crime by making property and potential victims more visible.

It seems as though there must also be some intangible impacts that occur from not being able to see the stars at night, the Milky Way or all the mind-blowing things going on in the cosmos.

In the same way that deforestation and our increasing disconnectedness from nature reduces our ability to see ourselves as having grown out from the planet, not being able to see space at night may reduce our ability to understand ourselves as a society existing within the big unknown universe.

It’s tough to say what, if any, real impacts of not being able to see space will have on our mentality, sense of self or society. It seems possible, however, that there is perhaps an inherent good in having had this window to the vast unknown universe just above our heads, and that there is something sad about knowing this current generation will be the first to grow up without ever having that.