Ever since I got my first “real” job out of university, I’ve suffered from anxiety. Besides the health or nutrition factors that might have been contributing to this, I think it also stems from the gravity of finally being out on my own and fending for myself.

The current generation of young adults, often called Generation Y or The Millennials, struggle with anxiety on a grand scale. This might be a result of economic insecurity and also an overly-wired and technology-driven lifestyle. We are the generation who have been told we can and should “have it all,” from a conscious lifestyle to a successful career on top of a fulfilling family life. And all this while we seek to be inwardly balanced, self-actualized and “zen.”

But these great expectations have arisen at a time when the economy and job markets are in flux. We’ve been left with realities that might be at a great disparity to our dreams and expectations. We grew up being told by our Baby Boomer parents that as long as we went to university, we would be fine.

Unfortunately many of us have discovered, after clamoring to get to that pinnacle of achieving a degree, that a bachelor’s degree means very little in today’s climate, and we now have to climb the even higher mountains of ever-increasing standards of education and training.

This is a reality, while graduate salaries are ever lower, and we are lucky to even get paid in the first place. Many jobs require lengthy unpaid internships for those starting out in their chosen industry.

According to a 2013 TD Canada Trust study, 30 percent of millennials struggle to support themselves on inadequate salaries, 44 percent find it difficult to pay for education, and 38 percent are bogged down with loan repayments.

Further, the British charity YouthNet reveals that a third of young women and one in 10 young men suffer from panic attacks. A 2013 American survey reported that 57 percent of female university students had experienced episodes of “overwhelming anxiety” in the previous year.

This has certainly been my experience while dealing with this mess of both internal and external expectations for my adult life. I have suffered from digestive distress, trouble sleeping, anxiety-induced chest pain, and a constant lump in my throat. I have also experienced a few near panic attacks in public places.

I have experimented with many strategies and remedies to work through this. Luckily I have never resorted to pharmaceuticals such as anti-anxiety medication or antidepressants. But this is all too often the case.

The purpose of this article is to shed light on this epidemic of anxiety, and to share one natural remedy which I have found very helpful in my personal journey. This is my amber necklace.

Using amber for anxiety
Anxiety crept up on me over the couple of years following my entry into the workforce. It was something I tried to ignore for a long time, and even attributed it to other medical issues, such as poor digestion and heart issues. I went to the doctor to get my symptoms investigated, and these were dismissed without any solid advice for resolution.

Eventually I became more aware that what I was experiencing was anxiety. I read about common recommendations, such as meditation. These go along the lines of “Feeling anxious? Just sit there and clear your mind for twenty minutes, and you will get up feeling so much better!”

I can’t help but think that these suggestions come from those who have never really been anxious, because anyone with anxiety will know that just “sitting down and clearing your mind” is not even remotely possible. For me, anxiety has been largely a physical phenomenon, rather than just racing thoughts or a worried mental state.

Somewhere along the line I read about using amber for anxiety. I had heard about parents putting amber necklaces on babies and finding they became much calmer and happier. I thought this was very interesting, and made the decision to try it out on myself. Initially I was skeptical, but I went into the experiment with an open mind and no expectations.

I made a long necklace with a chain at the back and a number of amber beads forming the front of the necklace. I wear this under my clothes, so that the amber part rests against my skin and becomes warm from my body heat. For the first few days I didn’t notice any effect. Actually, I probably never really noticed any “active effect” at all.

Until the day that my necklace broke, and I left it on my dresser rather than wearing it all day. In the absence of the amber, I noticed the dramatic return of the anxiety symptoms, including shortness of breath and a tight knot in my throat.

I was intrigued, and made a point of fixing the necklace so I could wear it again. Sure enough, a few days following my return to wearing the necklace, I felt better. I have noticed this trend continue repeatedly in correspondence with wearing or not wearing the necklace. This is also true if the necklace is accidentally resting on top of my clothes rather than touching my skin.

Succinic acid—One of the chemical components of amber is succinic acid. Some theorize that the warming of the amber against the skin causes the emission of a tiny amount of oil containing succinic acid. Skeptics point out that the acid doesn’t melt until much higher temperatures, between 180 and 200 degrees Celsius. It’s worth noting that isolated succinic acid has been scientifically found to reduce anxiety in mice.

Electric energy—Amber emits negative ions when it is rubbed, as when worn under clothing. This is similar to the proposed therapeutic effects of Himalayan salt lamps. The human body is a highly electric organism, since our neurons communicate using electric signals. It’s possible that amber interacts with the body on a bioelectric level.

The value of amber as a natural remedy
So what is the value of my story, and the countless others where adults have found relief from thyroid conditions or arthritis, and babies have been better able to handle the teething process? Most researchers are quick to dismiss simple anecdotal evidence. If the therapeutic effect of a technique or medication has not been widely studied in a controlled clinical trial, it is cast off as a folk remedy to be used only by those who are willing to risk their health with unproven pseudo-science. 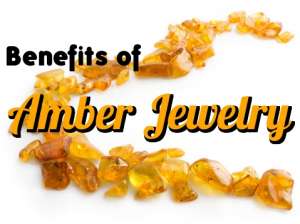 But I think there is a lot more to it. Amber has been used for many generations, especially in Scandinavia and Germany. Amber necklaces are widely sold in pharmacies in those countries.

Along with other traditional remedies such as acupuncture, yoga and essential oils, it seems logical that, if they didn’t work, people would have ceased using them a long time ago. For example, practices such as blood-letting and trepanning (drilling a hole in the skull) are traditional remedies too, but they ceased to be practiced after they were observed to be ineffectual or harmful.

Besides the time-tested aspect, it is my firm belief that there is something going on between our biological organism and the amber resin that modern science simply hasn’t discovered yet. Does this mean that we shouldn’t use it? I think not.

The value of the placebo effect is well-proven in science, and if some natural health techniques are chalked up by experts to nothing but a simple placebo, this is still extremely valuable. In the end, the patient still has their symptoms alleviated, and they feel empowered to help themselves and feel better.

If using a pleasant, harmless, aesthetically beautiful, and tradition-steeped natural remedy allows people to handle uncomfortable health conditions without resorting to pharmaceutical interventions, I think this is wonderful. These gentle time-tested solutions should always be used preventatively, and as a first step, rather than immediately defaulting to potentially dangerous medications.

I encourage you to try amber if you suffer from anxiety, arthritis or a thyroid condition. If you use amber to help infants or toddlers with teething, remember to take safety into account by always supervising the child or by using amber beads in the form of an anklet under a sock (as opposed to around the neck).