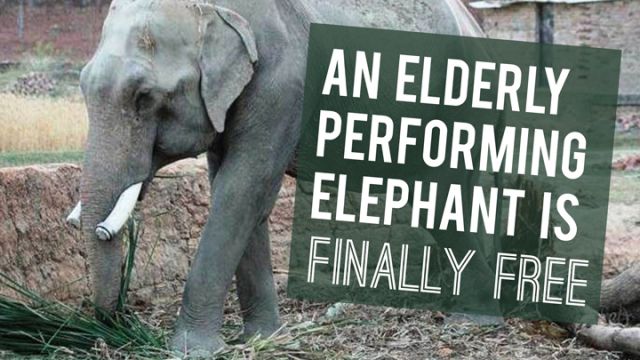 When rescuers finally took custody of an elderly 55-year-old elephant named Mohan, he was almost starved to death and his weathered flesh was covered in wounds and sores from being whipped and stabbed to perform. But now the unluckiest elephant has finally caught a break.

Stolen from his own wild herd in India as a small calf, Mohan was forced to perform for nearly as long as he was old, traveling in chains throughout the region as a begging elephant. Since 2013 Mohan has been the subject of a court battle between Wildlife SOS India and his captors.

“It was some pretty unbelievable stuff actually,” said John Pecorelli of Wildlife SOS to The Dodo. Court proceedings kept being delayed, there were riots in the region and a 120-degree heat wave succeeded in closing the court completely for days.

Finally, last week, a court ordered the elephant to be transferred to the state forestry department, which led to a rescue operation that lasted more than 24 hours and involved 50 police officers fighting their way through an angry mob refusing to let the animal go. Dubbed “the unluckiest elephant in the world” by rescuers at Wildlife SOS, Mohan finally caught a break after a lifetime of suffering.

“So while this is a really nice victory, the war is not over,” said a spokesperson for Wildlife SOS. “We still have a long ways to go.”

In an update posted on the Wildlife SOS India Facebook page, Mohan’s captors (including the mahout) have been charged for holding Mohan in illegal custody. In compliance with this court order, the police have arrested the mahout and sent him to jail. They are still, however, on the lookout for two more captor on the run; if found, they will be arrested. Mohan is finally getting the justice he deserves!