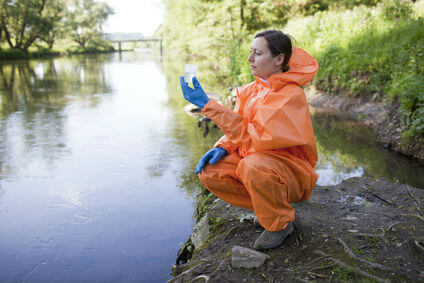 Atrazine has been widely and consistently used since 1958 when the chemical was registered by S. According to the Natural Resources Defense Council. This herbicide, used to control weeds, has been contaminating drinking water for years. The Environmental Protection Agency ( EPA), who oversees pesticide use, says atrazine is “not likely,” a human carcinogen.

In 2009, the EPA put together a panel of professionals including independent scientists and public health experts to evaluate the potential cancer risk of atrazine.

The minutes from the panels final meeting were released by the EPA in 2011. The panel criticized the EPA for not separating out different types of cancer in their assessment. The panel found “suggestive evidence” where four cancers were concerned including ovarian, thyroid, non-Hodgkin lymphoma, and hairy-cell leukemia.

In fact, at one point in the minutes the group indicated that there was “strong” epidemiological evidence linking atrazine to thyroid cancer. The panel further mentioned that there was not not any strong evidence to suggest that the chemical was not carcinogenic, as the EPA stated.

This is solemn news for sure for the hundreds of thousands of people who live in the heavily farmed regions of our country such as the Midwest and the South. A 2010 analysis conducted by the Natural Resources Defense Council shows that surface water and drinking water in these areas are heavily and consistently contaminated by the chemical. The levels of chemicals are above the EPA’s acceptable limit during times when farmers are applying the chemical, putting many people’s health at risk.

The EPA announced its review of Atrazine in 2009 and stated the following. “At the end of this process, the agency will decide whether to revise its current risk assessment of the pesticide and whether new restrictions are necessary to better protect public health.”

Nothing has been done to date to change the status of this chemical and when the EPA is questioned they merely state that they are in the process of considering whether or not they are going to change their recommendations on the pesticide. In the meantime, farmers continue to spread 76 million pounds of the chemical on farmland each year.

The Problem with Pesticides

Pesticides are designed to intentionally kill living things such as weeds, insects, fungi, rodents and others. They are not only found on farms but also in our homes, schools, forests, roads and public buildings.

Everything from the bug spray under your kitchen sink to the crop duster flying over your house is loaded with toxins. Pesticides in our air, our food and our water threaten to rob us of our health.

In 1962, Rachel Carson shocked the world with her book, Silent Spring, a captivating and thrilling story about the damage that toxic chemicals were doing to our health and our environment.

Since the release of this book that shocked millions of people, the use of DDT and other hazardous chemicals has skyrocketed, along with the extreme health threat that these chemicals pose.

Both chronic and acute medical concerns arise from exposure to these toxic chemicals, including everything from headaches, skin and eye irritation and fatigue to cancer and even death. Chronic health implications of exposure can linger for years after even minimal exposure to chemicals.

Pesticide use can take an extremely heavy toll on children’s health. There is now enough collective evidence to support the fact that the human brain is not fully formed until a child is 12. Children also have more skin surface for their size than adults, which means that they can proportionally absorb more toxic chemicals through their skin (and in fact, can also absorb more through their lungs and intestinal tract).

In addition, they also absorb more air, food and water per pound than adults. With immature immune systems, children are highly susceptible to both acute and long term damage from pesticides.

Pesticides are designed to kill, and despite what the government agencies and manufacturers tell you, the pesticides on the market today are not safe, even when they are used legally. The flaws in the way toxic substances are registered, coupled with our political process that permits corporations to influence pesticide policy, puts us all at great risk.

The fact that pesticide use has been linked to cancer and genetic damage has been made clear, over and over again, yet this does not seem to stop the onslaught of these poisons. According to the EPA, over 70 active ingredients that cause cancer in animal tests are in use presently.

Where is the sanity in this? Not to mention the fact that most of the pesticides on the market today have not been tested for long term safety. We are also kept in the dark about the toxic ingredients contained in these products, so we don’t even know what to look for.

The answer to our weed and pest problems lies in the adoption of a non-toxic, sustainable system of agriculture that supports organic farming practices and protects our health and the health of our planet. We need to endorse better testing procedures at both the state and federal levels, especially with those substances that are known to pose a health risk.

Any pesticide even suspected of causing human harm should be phased out of use. We need to protect our children, the most vulnerable population. Pesticides should not be used where they live and play, including schools and recreational facilities.

We must use non-toxic home and personal care products and take every measure to ensure that our children are drinking safe water and consuming healthy and organic food that is not tainted with toxic chemicals.

Citizens of this country need to be informed about what pesticides are in use and why they are being used. Farmers and workers should be protected from acute and chronic pesticide poisoning.

If you feel inspired to ask the EPA to ban this dangerous chemical you can do so here.