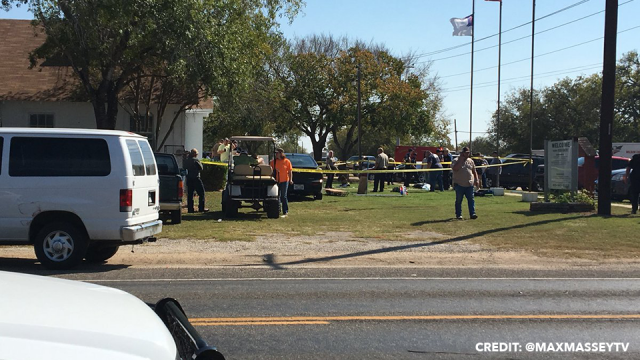 Just over a month since the deadliest mass shooting in United States history in Las Vegas, we now have the fifth deadliest.

Today, a gunman opened fire at a church during a weekly Sunday service. It will mark the deadliest church mass shooting in United States history.

It will also go down as the deadliest mass shooting in the history of the state of Texas.

The incident occurred at the First Baptist Church in Sutherland Springs, Texas, which is a very rural town of 643 people on the outskirts of suburban San Antonio. Early reports from emergency personnel show that at least 27 people have died and another 20+ have been injured. The shooting started about 30 minutes into the church service.

After a vehicular chase with police, the gunman was killed.

Local police say that the gunman who opened fire at a church near San Antonio, Texas, is now dead. https://t.co/KV1KsDwzM8

Photo of the shooter’s vehicle:

#BREAKING: This is reportedly a photo of the Texas church shooter’s vehicle. pic.twitter.com/9xerbfSF8I

Reports of the shooter’s name being Chris Ward have falsely been spread. He was a victim and is currently in the hospital.

The shooter’s identity is still unknown.

It is still unknown if the shooter was killed by police or took his own life.

One of the 27 killed was the pastor’s 14 year old daughter.

Carrie Matula, who was at a gas station about 50 miles away from the church when the shooting took place, said that it sounded like “semi-automatic” gunfire. “It was rapid fire,” said Matula. “It was just boom, boom, boom.”

Shooter Identified As Devin Patrick Kelley, a 26 year old with past military experience:

According to witnesses, the shooter was forced to stop his rampage when someone started firing at him.

Texas Church Attacker Fled After Good Guy with a Gun Shot at Him https://t.co/vJCRZu0GVq

What we know so far about the Texas Baptist church shooting https://t.co/8Nis1rg4uu pic.twitter.com/sLN6XqgAcr

Now confirmed that shooter took his own life:

CBS NEWS: Texas church shooter appears to have been killed by self-inflicted gunshot wound to the head, sheriff says.

Updates will be made as they emerge.