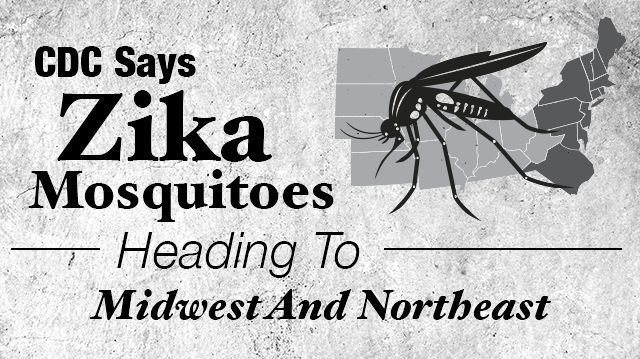 The CDC is warning that as warmer weather starts rolling into the northern part of the US, Zika virus–carrying mosquitoes are likely to follow. Although previous reports from the organization suggested that Florida, Texas, Louisiana and other southern states may see cases of Zika this summer, recently released maps from the CDC suggest that the Midwest and northeast parts of the US are likely to be affected as well.

This admittedly sounds like scary news. However, the CDC cautions that “maps are not meant to represent risk for spread of disease.” Instead, they only suggest where mosquitoes that may be able to transmit the virus live. Experts also caution that the US is not likely to see the same number of cases as countries like Brazil and Colombia. According to Dr. Tony Fauci, the head of the National Institute of Allergy and Infectious Diseases, “We do think the living conditions in general in the United States, the lack of density, better air conditioning, wider use of screens, will keep us in better shape.”

They also point out that a mosquito would have to bite a person who already has the virus in order to spread it to another person, and right now, there aren’t that many cases of Zika in the US — 270 so far. However, all of these cases were related to traveling abroad. But, as summer approaches and mosquitoes become more active, numbers may go up.

How the virus spreads

A recent survey suggested that one-third of Americans thought the Zika virus could be spread through coughing, which is absolutely false. Here are the four ways Zika can actually be spread:

Zika can spread through the bite of a mosquito that is carrying the virus, specifically the aforementioned Aedes aegypti and Aedes albopictus species, which are also know to spread dengue and chikungunya. According to the CDC website, “Mosquitoes become infected when they feed on a person already infected with the virus. Infected mosquitoes can then spread the virus to other people through bites.”

Infected men can pass the Zika virus onto their sexual partners both before symptoms start and after they’ve resolved. The virus is known to stay present in the semen longer than the blood.

Pregnant women already infected by the virus can pass it to the fetus during pregnancy. It is also possible for the virus to be passed from mother to child during labor.

The virus can also be transmitted via blood transfusion, although no cases of this have been reported yet in the US.

Risks and dangers associated with Zika

The biggest concern with the Zika virus is its link to birth defects when passed from a pregnant woman to her child. Many women with Zika have given birth to babies with unusually small heads and brain damage. This condition, called microcephaly, is also linked to other problems including seizures and a range of other developmental delays and disabilities.

The virus can also cause symptoms in adults, including fever, rash, joint and muscle pain, and red eyes. However, according to the CDC, “Most people infected with Zika virus won’t even know they have the disease because they won’t have symptoms.”

The best way to protect yourself from Zika, according to the CDC, is to prevent mosquito bites by wearing clothing that keeps you covered, applying insect repellant, using screens and other barriers, and eliminating potential mosquito breeding sites like still water. The World Health Organization (WHO) is also recommending that pregnant women avoid areas with ongoing Zika outbreaks entirely, and to practice safe sex with any men who have lived in or traveled to these areas.

For more information on how to protect yourself, check out these natural ways to keep mosquitos away.