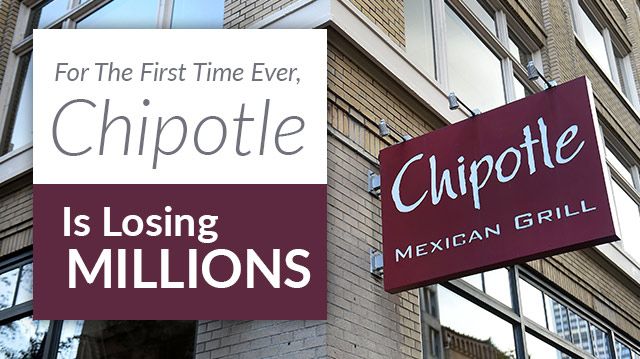 Chipotle is one of America’s most beloved fast-food chains. Since it opened its doors in 2006, Chipotle’s popularity has been soaring. However, likely due to the widespread cases of three foodborne illnesses traced back to Chipotle in 2015, sales are now dropping.

Regarding reasons for the loss, Chipotle has stated that same-store sales were the culprit. These sales were down by almost 30 percent compared to last year. Specifically, the company cites fewer purchases in stores, along with the financial hit of promotional campaigns.

These promotional campaigns, which include free guacamole and chips, “buy one get one free” deals, free burritos with gift card purchases, and $50 discounts off catering orders, have been launched in a mad scramble to bring in customers after multiple foodborne illness outbreaks in 2015.

These illness outbreaks were large in scale, and have made many customers fearful of food safety when eating at Chipotle. It all started with a Salmonella outbreak in Minnesota. Then came four separate E. coli outbreaks, which sickened approximately 500 people. If that wasn’t enough, norovirus reared its ugly (and disgusting) head.

Although Chipotle has taken measures to prevent further outbreaks, such as closing down all of its stores for four hours earlier this year, and inspecting its locations for safety violations, many people still feel uneasy eating there, and for good reason. Who wants a dose of E. coli with their burrito!

CNN, citing J.P. Morgan analysts, reports that the 2015 outbreaks will cost Chipotle about three years of earnings growth. Analysts expect that Chipotle can bounce back from this, but will likely not experience “substantial growth” until 2018.

I do have some sympathy for Chipotle in this matter. After all, this is a company trying hard to meet consumer demands for healthier ingredients. Chipotle has voluntarily switched to non-GMO sources for its corn, cornstarch, and baking soda. Much of the dairy that Chipotle uses comes from pasture-raised animals, and several ingredients, including avocados, black beans, rice, jalapenos, and herbs, are usually organic.

Chipotle is also transparent about its ingredients; the company details on its website when preservatives are used, and doesn’t hide the fact that meat comes from animals often given GMO feeds. It’s by no means perfect, since preservatives and non-organic ingredients still abound, but Chipotle’s transparency and willingness to shift towards healthier, more natural ingredients is commendable.

However, despite Chipotle’s efforts, fast food is still fast food. Even if they start using organic, non-GMO, preservative-free ingredients in all of their meals, we still don’t see it prepared, and it’s being quickly served to us by employees who may not be able to take a day off when they are sick. Therefore, foodborne illness is always a prevalent risk — not just at Chipotle, but with any fast food.

To save yourself the worry, and to ensure your meals are healthy, skip the fast food and whip up your own yummy Mexican food at home. You can cook the components in bulk, and freeze or refrigerate them to grab on the go later. It’s not difficult to do, it just requires a change in mindset.