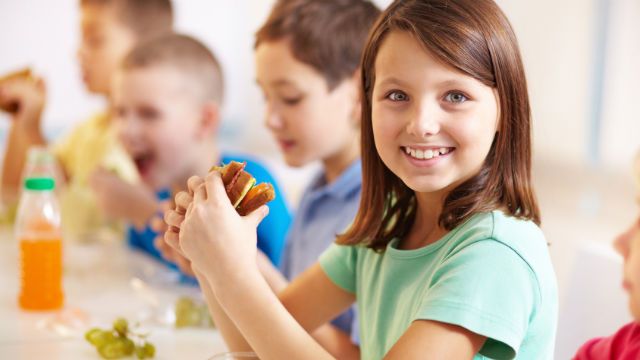 For many people, the passage of the Healthy, Hunger-Free Kids Act of 2010 seemed like a positive step in the right direction. However, though it was well-intentioned, the Act has set nutritional standards that many schools are having trouble meeting.

This is not the only trouble, as students and teachers alike are not happy with the new lunch offerings either.

One of the students who has publicly spoken, Callahan Grund, a football player from Wallace County High School in Kansas, said, “we had chicken nuggets one day. Last year we got six and this year we only got three.”

Students across the nation from Massachusetts to South Dakota have voiced their concerns about the new meals. Droves of students are bringing their own brown-bag lunches in an effort to boycott the new school meals (which is a much healthier option in the first place).

To get their point across, students and teachers in Kansas made a YouTube parody video called “We Are Hungry” that has been viewed more than 100,000 times.

Reductions of calories and food groups

Not only have calorie allotments for the meals been reduced, but specific limits have been placed on things like how much meat can be served in a week. This is a point of contention among those who feel that athletes in particular need larger servings to keep up with the physical demands of their bodies.

According to Leah Schmidt, president-elect of the School Nutrition Association and director of Nutrition Services for Hickman Mills School District in Kansas City, “really active athletes may need more than the lunch, but that’s not our normal customer in the school lunch line. Not everybody needs all those calories. Lunch is not meant to be 100 percent of their calories for the day.”

However, considering that many kids eat breakfast at school, as well as lunch, that means many students are consuming up to 50 percent of their daily calories and nutritional intake from school meals.

Are the guidelines unreasonable?

Some politicians wanted to grant schools waivers if they are losing money because of difficulty meeting the new nutritional requirements. There are arguments that the regulations are too strict.

“It is clear to me that it is time for the administration to hit the pause button on the implementation of school nutrition guidelines and listen to the feedback – some of the rules are unworkable and having the opposite effect,” stated Rep. Robert Aderholt, chairman of the House Appropriations Subcommittee on Agriculture.

Aderholt added, “I am hearing this from the school administrators as well as the students themselves.”

While the school lunch guidelines are being debated, it is relevant to mention that to ensure that your kids are getting what they need – both in nutrients and portion size – from their lunches, you can do no better than to cook and pack it yourself, with love!