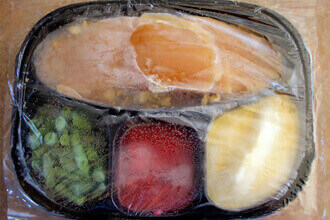 While many of us like to think of America as fairly progressive, when it comes to some things we may be a bit behind the ball. Much of our food supply is grown using genetically modified seeds, doused with a host of dangerous chemicals and then processed with ingredients that may cause damage to the body.

If you care about your health, reading labels is a must, especially when you think about the ingredients allowed in American foods that are banned in other regions of the world.

Is that because Americans are more resilient to them? Unfortunately, no—the reason behind it may be more to do with politics and money than anything else.

The FDA says that BHA (Butylated Hydroxyanisole) and BHT (Butylated Hydroxytoluene) are “generally recognized as safe,” but these substances have been shown to increase the risk of cancer in animal tests and are banned from foods in countries throughout Europe as well as Canada, Australia, New Zealand and Japan. These synthetic additives are typically found in foods like potato chips and cereals to prevent rancidity in oils and extend shelf life.

The Department of Health and Human Services considers BHA to be “reasonably anticipated to be a human carcinogen.” Several studies have also shown that BHT to be carcinogenic.

Dairy farmers inject the animals with these genetically engineered hormones resulting in the cows often becoming lame, infertile, and to suffer from inflamed and infected udders. The humans that consume the milk from these cows are exposed to a number of risks, including breast, colon and prostate cancer.

Using these synthetic hormones is banned in the European Union, Canada, and other countries due to the risks to animals as well as humans.

Potassium Bromate is a bread additive found in foods like bread rolls, wraps, bagel chips and bread crumbs. It is used to help strengthen the dough which reduces the time required for baking, resulting in lower costs.

It is produced using the same toxic chemical found in bromine, an additive linked to kidney and nervous system disorders, hearing loss, digestive problems, and even birth defects and schizophrenia. The agent has been banned in the EU, Canada, Peru, Nigeria, Brazil, South Korea and China.

This substance is found in breads, frozen dinners, boxed pasta mixes and a wide range of packaged baked goods. It is often used to enhance the texture of soft white breads like hamburger buns found at fast food joints such as Burger King and McDonald’s.

The chemical has been linked to allergies and asthma and is primarily used in foam plastics such as the material found in the soles of a sneaker. It is banned in the UK and many other European countries as well as Australia. In Singapore, adding this toxic chemical to food could get you 15 years in prison and a hefty half-million dollar fine.

Brominated Vegetable Oil, or BVO, can be found in sports drinks and citrus-flavored sodas like Mountain Dew. It acts as an emulsifier to prevent the flavor from separating and floating to the surface of the beverage.

Elevated levels of this chemical in the body can lead to thyroid problems like hypothyroidism as well as cancer or autoimmune disease. The main ingredient in BVO is bromine, which is well-known to be corrosive and toxic as mentioned previously. BVO is prohibited in over 100 countries.

Artificial dyes like red 40, yellow 5 and yellow 6 have been banned in many other countries, but their use in the US has increased five times since 1995. Food coloring used to come from natural sources, and in Europe, food manufacturers use things like saffron and turmeric to create more vivid colors in their products.

Most artificial colors are made from coal tar, something that is used to protect the shine of industrial floors and is used in head lice shampoos to kill the annoying insects. They are often found in processed foods like macaroni and cheese, colorful kids’ cereals, sports drinks and cheese-flavored chips or crackers. These dyes have been linked to growth abnormalities, allergies, vital organ damage, hyperactivity in children, and a host of other health issues.

Arsenic can be found in poultry as the FDA permits it in chicken feed to increase growth and improve efficiency in feeding the birds. It also causes them to appear pinker as it affects the blood vessels, which also gives them a more “fresh” appearance. It is classified by the EPA as a human carcinogen, and the EU has outlawed its use since 1999.

This list should give you another reason to pay close attention to food labels—and, keep in mind, just because the FDA says it’s okay, doesn’t mean you should consume it.