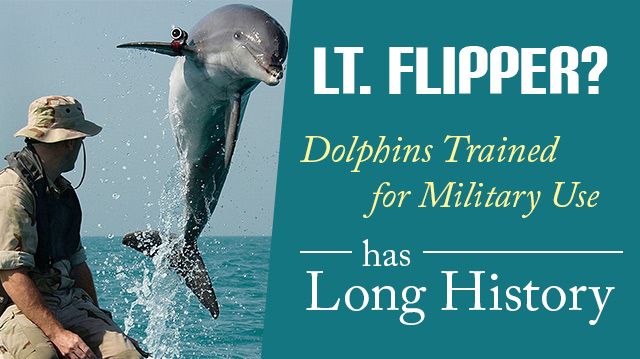 You’ve heard of military dogs, but what about dolphins? These gorgeous and intelligent creatures are back in the news with a report that the Russian Ministry of Defense has purchased five bottlenose dolphins for undisclosed purposes. If the dolphins will be used like we think they will — by the military for national security — it’s just the latest iteration of dolphin use for military purposes. The United States and Russia have used dolphins’ natural abilities for decades.

The U.S. Navy’s Marine Mammal Program dates back to 1960. That’s the same year OPEC was formed, JFK won the presidency and the year the U.S. announced 3,500 American soldiers were going to Vietnam. The program had two goals:

Dolphins, as well as sea lions, beluga whales and other marine mammals were eventually trained for a variety of tasks, including underwater surveillance with a camera held in their mouths, delivering equipment to divers and finding and retrieving lost objects.

The program began its first military project, called SEALAB II, in 1965. Part of the project involved a bottlenose dolphin named Tuffy, who completed the first successful open ocean exercise off the coast of La Jolla, California. Tuffy dove 200 feet to the an installation and delivered tools and mail to the Navy personnel there.

After this success, the Navy sent five dolphins to perform surveillance in Vietnam. Stationed in Cam Ranh Bay, these dolphins also protected American boats from underwater swimmers who might try to sabotage the vessels. The Navy began “stockpiling” wild dolphins for “national defense purposes” throughout the latter 1960s and early 1970s.

Dolphins in the Persian Gulf

When American ships were in the harbor of Bahrain from 1986 to 1988 prior to the Gulf War, six Navy dolphins were there too, protecting ships from mines and enemy swimmers. Dolphins also escorted Kuwaiti oil tankers through waters potentially mined waters. Unfortunately, one of the dolphins, named Skippy, died from a bacterial infection while serving in the region.

The Navy planned to use dolphins to protect the Bangor, Washington Trident Missile Base in the late ’80s, but animal rights activists intervened. A group sued the Navy under the National Environmental Protection Act, demanding that the Navy study the effects of using dolphins born in warm water, like the Gulf of Mexico, in colder waters, such as off Bangor. A judge agreed with the activists and the Navy dropped plans for the project.

The move was a positive one, though, because by the early 1990s, the Navy’s official policy concerning dolphins had shifted. Dolphins could only be moved to locations that were within a 20 degree difference in temperature, except for emergencies.

The Cold War ended in 1991 with the dissolution of the USSR, and with it, the Navy’s Marine Mammal Program was downsized. Instead of keeping the 103 dolphins in the program, the Navy kept only 70. Most of the program’s documents were declassified and training procedures were developed to help former Navy dolphins transition back to life in the wild. Some dolphins were gifted to marine parks, while others were kept in the care of the Navy.

The remaining working dolphins supported other operations, including providing security during the 1996 Republican National Convention, which was held waterside at the San Diego Convention Center. The convention took place less than a month after the bombing at the Atlanta Summer Olympics. Officials were anxious about the safety of those attending the convention.

In 2003, dolphins were an integral part of the Navy’s Special Clearance Team One, which included human divers and unmanned underwater vehicles. Dolphins helped divers locate and clear mines. There were rumors that the mammals were trained to kill enemy divers during several military conflicts, including the Iraq War, but that’s a claim that the Navy defiantly maintains is false.

Future of dolphins in the U.S. military

In 2002, the Navy program received $14 million in funding from the federal government and backing from the Pentagon through 2020. However, between potential animal welfare issues and the advancement in robotics, it’s unlikely we’ll see an expanded program for military dolphins.

The Space and Naval Warfare Systems Command (SPAWAR) in San Diego currently trains 85 dolphins and 50 sea lions for use alongside the naval personnel. According to SPAWAR spokesman Ed Budzyna, anti-mine robotics are advancing quickly enough that one day we may not need dolphins. “As soon as the robotics are good enough to replace the program, the program will probably be phased out.”

If so, it will be the end of an interesting segment of our military history, but will be arguably better for the animals overall. Without a doubt, these animals have helped protect our men and women in arms, and have taught us invaluable lessons about their amazing natural abilities to navigate the world around them.