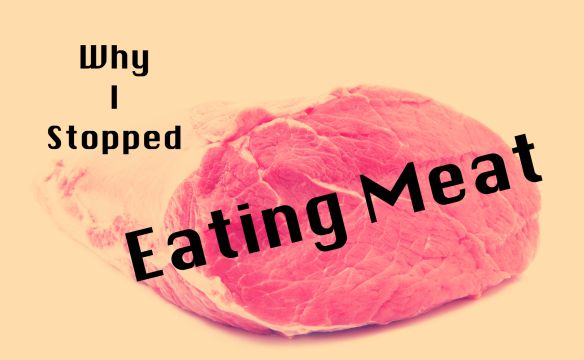 I grew up in the late 70s and early 80s when meat was the center of the evening meal, or so it seemed. There was always some kind of pork, hamburger, chicken, or, as my siblings and I liked to refer to it, “mystery meat.” We never really knew what the mystery meat was, only that it was “good for us” and we had to eat it.

By the time I was in college, and experiencing the dawn of my independence, I began to make food choices that were not inclusive of meat. This was somewhat unconscious at first, but eventually grew into what I called a strong meat aversion. Perhaps it started as a rebellion of sorts — I had eaten enough meat in my youth and it was time for a break.

As I learned more about industrial farming and healthy living, it became apparent that pursuing a meatless diet was my destiny.

I have been 100-percent vegetarian for about 10 years. My health journey continues, and I have dropped other things from my diet as my health knowledge has increased. These include dairy, gluten and sugar.

Before I get too far into my reasons for choosing a meatless diet,  it is important for me to note that this is not for everyone. Becoming a vegetarian is a personal choice and one that must be made after careful consideration.

Not only this, you must also understand food as a source of energy and be able to provide your body with just what it needs to be healthy — meat or no meat. We are a mixed camp at The Alternative Daily — some vegetarian, some meat eaters, and believe it or not, we all get along great!

The only caveat I have for my meat-eating friends is to be very choosy about what types of meat you eat, and try to have at least two meatless meals each week. If you desire to eat meat, eat the highest quality meat you can, and think of meat not so much as a main meal but as a condiment.

When people ask me why I made the decision to cut meat out of my diet, I start with these top 6 reasons:

I am healthier when I eat a plant-based diet

After much research, I have come to the conclusion that humans are not omnivores but actually natural herbivores. We are healthiest when we eat only plants. Many of the bioactive components of plant foods have a substantial impact on the development of serious chronic health conditions, such as type 2 diabetes and heart disease.

Many plant foods are an excellent source of protein, including lentils, beans and nuts. Foods that can potentially fight cancer include artichokes, watercress, thyme, pumpkin, garlic, olives, black pepper and rosemary. Many foods, such as cinnamon and turmeric, also lower blood sugar and help stave off or control type 2 diabetes.

I don’t have meat-eating instincts

Unlike natural omnivores and carnivores, humans don’t appear to possess the natural desire or instinct to catch live animals, tear them apart and eat them raw.

Many humans who enjoy meat don’t want it to look like the animal it came from — they want it skinned, deboned and wrapped in a plastic tray at the grocery store. I have yet to know any meat eaters who look forward to slaughtering a live deer with their own teeth.

I don’t have meat-eating physiology

Humans have the physiology of natural plant-eaters. Our teeth are small and blunt with flat molars that are perfectly suited for grinding plant fibers. When I look at my dog’s teeth, they don’t look anything like mine — they are sharp-edged, perfect for tearing flesh.On the other hand, my horse’s teeth — designed for grazing on wild grasses — are blunt like mine.

Also, consider our hands, they are well designed for gathering nuts, fruits and berries — not so much for ripping up skin and flesh. In contrast, my cats have claws that they can use to catch and hang on to their prey.

In addition, humans do not have a digestive tract for digesting meat. Meat eaters in the wild, like bears and mountain lions, swallow their meat with only minimal chewing — they have loads of acid in their stomach that breaks down the meat while killing the bacteria that causes food poisoning at the same time.I don’t know about you, but I chew my food really well before swallowing it.

Humans also have a carbohydrate-digesting enzyme in our saliva to start the digestive process — this is the same as herbivores. Since we don’t have the same acid component in our digestive tract as carnivores and omnivores, we have to cook our food to avoid food poisoning. In addition, our intestinal tract is long like other herbivores. This is perfect for the digestion of cellulose found in plants. In contrast, carnivores and omnivores have shorter intestines that are perfect for digesting meat quickly before it starts to spoil.

Hormones found in meat have been around a long time. In fact, in the 1930s, research showed that estrogen was impacting the growth rates in cattle and chickens. In the 1950s, a synthetic estrogen was used to increase the size of cattle. However, it was found that this chemical caused cancer and is not being used anymore as a fattening tool.

Today, the Food and Drug Administration (FDA) allows five different types of hormones in the production of food. Synthetic variations of testosterone and progesterone are allowed in cattle and sheep. A pellet that releases the hormones is placed behind the ear of the animal. Although the ear is thrown away after slaughter, much of the hormones and chemicals remain in the animals. Case in point, girls are reaching puberty at younger ages than ever before.

The nitrates used to cure meat and give it a pink or red color are converted to nitrosamines in the body. These chemicals are shown to cause cancer.

Animals raised in factory farms consume more than 30 million pounds of antibiotics each year. If you buy your meat in your local supermarket, it is likely that it contains antibiotics. And, bacteria are smart — they have learned how to outsmart the chemical cocktail of antibiotics, creating a number of strains of aggressive and indestructible superbugs.

A 2011 study that was published in the journal Clinical Infectious Diseases, elevated “gross and disgusting” to a whole new level. Researchers found that half of all United States supermarket meat contained staph bacteria, including MRSA, the hard-to-kill and potentially deadly strain. Turkey, followed by pork and chicken, contained the most staph bacteria.

We bet you did not know that you and your family are on Prozac. In 2012, Johns Hopkins University studied the feathers of imported chickens to find out just what the birds were fed prior to slaughter. The feather analysis revealed traces of antidepressants, banned antibiotics, allergy medications and painkillers.

Because factory farmed animals are highly stressed, Prozac is often administered to reduce anxiety and promote growth. Caffeine was also found in half of the samples taken. Caffeine is often given to chickens to keep them awake so that they eat more and grow faster.

Cattle in feedlots are fed grain that they are not designed to digest. The grain changes the chemistry in the cow’s stomach creating the perfect environment for a deadly strain of E. coli to survive.

Flunixin: This drug can cause kidney damage, colon and stomach ulcers, as well as bloody stools in humans.

Ivermectin: This is an animal wormer that can cause neurological damage in humans.

Arsenic: This known carcinogen is commonly fed to chickens, and the chicken litter and feces are sometimes fed to feedlot cattle. Keep in mind that the majority of supermarket and fast food in our country comes from feedlot farms.

Penicillin: This drug can cause life-threatening reactions in those people who have an allergy to it.

Copper: Although copper is a necessary element, if too much accumulates in the body it can cause harm.

Raising meat is an inefficient use of water

We are in the middle of an ever-increasing water crisis — leading the way with water consumption is… you guessed it… meat production. According to a study from Cornell University, producing one pound of animal protein requires 100 times more water than producing the equivalent in grain protein.

Researchers in another study note that the amount of water to produce one pound of beef is about 1,600 gallons, in comparison to 102 gallons for a pound of wheat (or other plant matter). 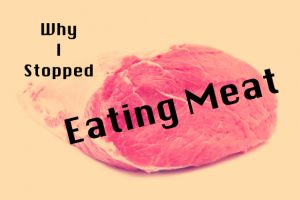 Humans drink under one gallon of water each day, while a cow can drink up to 23 gallons in a day. Imagine, millions of factory-farmed animals using this much water on a daily basis — it adds up to an astounding amount.

In addition to all the water needed to keep animals hydrated, more water is needed to irrigate fields, to wash waste off factory floors, and to clean the blood and grease from butchering equipment.

We grow millions of acres of crops such as corn and soybeans (not a natural diet for livestock) to fatten up our animals. These crops are cheap because of government subsidies, but because they are exogenous, they require a great deal of water.

To put this in perspective, you could save more water by replacing a pound of beef with plant food than you could by not showering for six months!

What about grass-fed beef you might ask? Well, unfortunately, it takes even more water to sustain these animals. They are more active than their factory-farmed cousins, so they drink more. In addition, grass-fed beef creates about 60 percent more greenhouse gas emissions than factory-raised cattle — sometimes producing up to four times as much methane according to Science News. So, while grass-fed beef may be a healthier option, it is no better for the environment.

Head to head, butt to butt, they are raised in conditions so deplorable that most Americans would be sickened if they knew the truth. Animals piled on top of each other, confined to spaces that are not suitable for one, let alone twenty or more animals. Low light, no exposure to fresh air or sunshine, no exercise and genetically altered — sickness ensues and drugs are administered to maintain order, control infection and hasten growth.

Many animals, pushed to weights that their frame cannot withstand, become crippled beyond recognition. Slaughter is equally as disturbing, and animals who live a very short, unimaginably stressful life, endure more stress and often unnecessary pain, moments before death. In fact, many don’t even make it this far.

Well, there you have it, my top 6 reasons for not eating meat. As I mentioned earlier, nixing meat from your diet is something you should do with much thought, conducting your own research, and even going on a trial period to see how you feel.

I generally suggest a three-week vacation from meat with a boost in plant food and healthy fat found in such things as coconut oil, raw nuts and avocados. Keep a food diary to record what you eat and how you feel. If eliminating meat from your diet has helped you look and feel your best, you will have your answer.

Susan is the Content Director at The Alternative Daily, a Certified Health Coach, Certified Metabolic Typing Advisor and Master Gardener. With an extensive knowledge of whole foods and wellness, Susan enjoys educating others on how to live healthy and sustainable lives. She presently lives off grid in the middle of the New Mexican high desert with her three daughters and numerous animals.