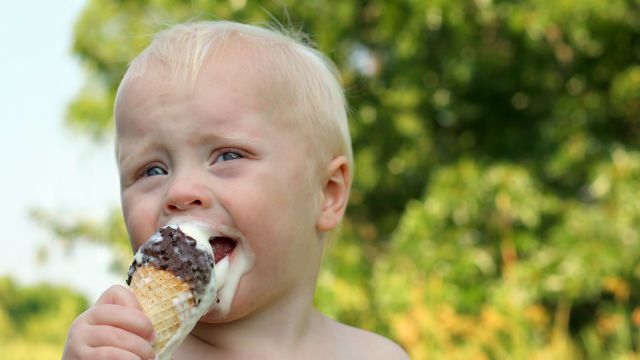 In a three-year study presented recently at the European Congress on Obesity in Sofia, Bulgaria, researchers revealed that children as young as five years old seek to relieve stress by turning to unhealthy foods.

Researchers asked about 500 elementary school children, between the ages of five and ten, questions about their lives such as whether they had experienced stressful events like their parents divorcing or the death of a grandparent, bullying, fights with siblings or friends, and how they felt about it.

Parents were also asked questions, including how often their children ate different types of foods, while their offspring explained when they felt driven to eat them. The results showed that the more stressful a child’s life was, the more sweet foods they ate.

The researchers believe that as kids grow older, emotional eating will only get worse as they’ll be able to purchase their own “comfort” foods. While the link between emotional eating and stress has long been recognized in adults, few studies have focused on children, but many kids live in very stressful environments and most will undergo at least some type of stressful event that can lead to emotional eating.

Researchers also note that levels of the hormone cortisol tend to rise along with stress which is believed to stop the body’s reaction to leptin, the hormone that regulates our appetite and tells us when we’ve had enough to eat.

Another interesting observation was that there were also children who had high cortisol levels who didn’t cope by eating sweets and didn’t gain additional weight. Evidence, the researchers believe, that the key to reducing obesity may be stress management.

Lead researcher Dr. Natalie Michels said that it’s important for parents and schools to teach children how to cope with life’s inevitable ups and downs. Both parents and children should be aware that stress can influence emotional eating behavior, so they can pay attention to possible triggers and ward off this habit before it begins.

Emotional eating and your role as a parent

Remember that as a parent your role is key to prevention as emotional eating is generally something children learn from their caregivers. If you turn to cake or potato chips when something is bothering you, it’s likely that your child will do the same.

Giving your son or daughter cookies when they’ve had a bad day also teaches them to soothe the hurt with foods which sets them up to struggle with emotional eating for the rest of their lives. While it may seem harmless, increasing their odds of becoming overweight or even obese also increases their chances of developing numerous chronic illnesses and disease not to mention a poor quality of life as they grow older.

Childhood obesity has more than doubled in children and quadrupled in adolescents over the past 30 years according to the Centers for Disease Control and Prevention. In 2012, more than one-third of children and teens were overweight or obese. Those are scary statistics, and something that parents have the ability to significantly change.

How to teach your child healthy coping mechanisms

From an early age, avoid using food to celebrate occasions – or to reward your child for good behavior. Instead, use verbal praise and other types of rewards like stickers or books, a pair of shoes, or something else you know he or she will enjoy.

When your child is feeling blue, instead of stuffing those feelings down with food, encourage them to talk about how they feel and teach them to address it in healthy ways like by getting their endorphins (those feel good hormones) pumping again. Go for a bike ride, take a walk together, or go to the park where they can run around and play.

Deep breathing is also an excellent, healthy coping mechanism. Teaching your child how to do it provides them with a great tool they can use throughout their lives. For very young kids, you might buy a pinwheel toy, ask your child to take a slow, deep breath from their belly and hold it for two seconds. Then, they’ll release their breath by blowing the pinwheel.

Another good technique is the candle and flower. Light the candle if your child is old enough for it to be safe. Using the flower, ask your child take a slow, deep breath through their nose, like they’re smelling it.

When they breathe in the flower, ask them to pretend they’re breathing in good, calm feelings – hold the breath for two seconds and then release it slowly by blowing out the candle, pretending that they’re breathing out those “yucky” feelings.

Teaching your child how to cope with stress is one of the most important lessons you can give as a parent.

Note: original study not yet published but presented and reported on at the European Congress on Obesity