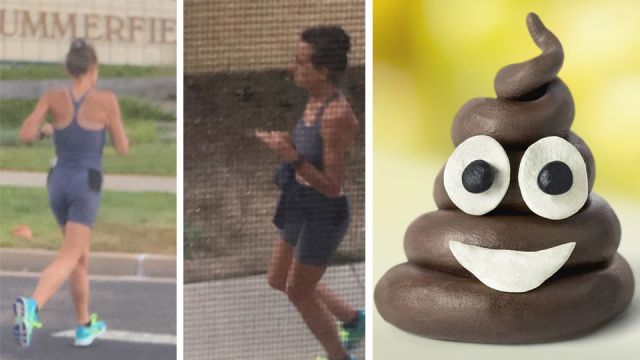 We’ve all had to deal with that neighbor who never picks up after their dog, but what if it was the neighbor herself who was doing the deed on your front lawn? That’s exactly the problem a Colorado family is struggling with. The Budde family of Colorado Springs says they’re being terrorized by an unidentified jogger who has developed a habit of defecating on their lawn. To be clear, the family has no idea whether she’s a neighbor. In fact, they only know two things about her: she runs, and she has the runs.

The first time the poopetrator stuck, mother and Colorado resident Cathy Budde said she assumed it must have been some kind of accident, after her kids caught the jogger in the act. “I thought for sure, she’s mortified, it was an accident. She’ll probably go get a dog bag, come back, clean it up, you know, and never run here again,” she told local news station KKTV.

Strangely, this was only the start of the Budde’s problems. Since early August, the mysterious jogger has reportedly paid the Budde family a visit roughly once a week — seemingly with the sole purpose of doing her business on their pristine lawn. Dubbed by the Budde family as the “mad pooper,” she even comes prepared, apparently leaving a few squares of toilet paper with her excrement.

Budde says she’s tried everything, including photographing the poodophile, and even confronting the squatting sprinter directly. “So I come outside, and I’m like… ‘Are you serious? Are you really taking a poop right here in front of my kids?” she asked on one occasion. Budde continued, “She’s like, ‘Yeah, sorry!'”

On that occasion, the dashing defecator made her quick escape shortly afterward — jogging into the distance with her freshly-emptied bowels.

Police are baffled by the behavior

Even the local police seem baffled by this loping log-leaver. “For someone to repeatedly do such a thing… it’s uncharted territory for me,” said Colorado Springs Police Department Sergeant Johnathan Sharketti. “It’s abnormal, it’s not something I’ve seen in my career,” he told KKTV.

However, Budde does have some theories of her own. Judging by the BYO toilet paper, she suspects the poos are premeditated, and some media reports say there are no signs the woman suffers mental issues (except, of course, for the fact she poops on lawns). She also says there are plenty of public restrooms in a nearby park, along with a gas station a few blocks away. However, the conspiratorial crapper seems to prefer a nice, well-kept lawn.

“There’s plenty of public restrooms less than a block away from where she’s targeting. This is intentional,” Budde said. She has also resorted to measures like a sign — one with a seemingly self-evident message directed at the dashing deucer. “I put a sign on the wall that’s like, Please, I’m begging you, please stop,” Budde said. “She ran by it like 15 times yesterday and she still pooped.”

Moreover, each time Budde tries to up the ante in her battle against the dung deliverer, the plot has thickened. In one of the latest developments, Budde says the guano guerrilla has taken to mixing up her schedule just to avoid being caught by the confused family. “Two other times we’ve caught her… [But] she changed up her time a little bit because she knew I was watching,” Budde said.

For now, Budde is at a loss for what to do, and is hoping her signs might send a message to the bad Bristol baker. “To the female jogger that continuously uses of walkway as her toilet: Please stop immediately! You have already exposed yourself to our children and the police have been contacted twice,” one reads.

According to police, the manure menace could face charges of indecent exposure and public defecation. For now, though, the BM bandit is still running free, with no clear reason behind her unusual habit.

She’s not the only public pooper

Strange as it may sound though, Colorado’s fast-footed feces phantom is far from the first to ply such a curious trade. In 2015, the so-called “Portland Pooper” left his mark on Oregon in a very literal manner: by dumping his do on a local business owner’s property. The Portland Pooper’s reign of terror continued for a month, before a campaign of public postering appeared to drive him underground. Even today, the Portland Pooper remains at large.

In a similar case of serial defecation, Akron, Ohio was once plagued by their own excrement escape artist. Over the course of at least three years between roughly 2012 and 2015, the unknown man defecated on at least 19 vehicles. Even today, it’s unclear whether he was caught. Not even Reddit’s Unsolved Mysteries forum knows for sure what happened, though some say perhaps he should be allowed to live free, and poo wherever he wants so long as he doesn’t hurt anyone.

“This dude is just sitting on cars and getting away with it. He could’ve been murdering people. If this is how he expresses his inner demons, I’m weirdly accepting of this. Kind of,” one Reddit user said.

So what do you think? Why would anyone turn to a life as an ordure outlaw, and is it even a big deal? Tell us in the comments below.