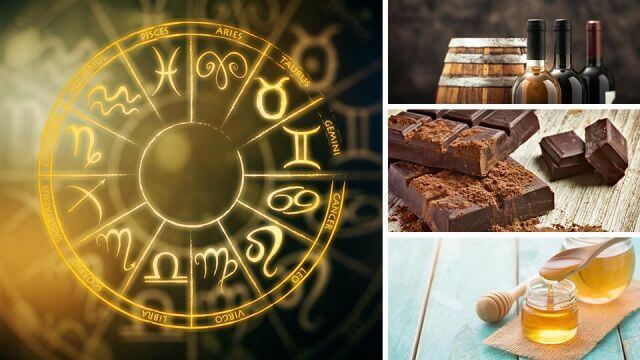 Do you have a hankering for everything sweet or a craving for salty foods? Do some foods bring you down, while others lift your spirits? Well, you may just want to blame it on your zodiac sign. Here’s what the stars have to say about your best and worst food choices.

Fun-loving and independent Aquarius. You’re a real humanitarian at heart and always looking for a cause to fight. But sometimes your temperament gets the best of you. Avoid foods that wreak havoc on your mood and replace them with great mood-boosting alternatives.

Avoid high fructose sweeteners like agave nectar, and foods loaded with hidden sugar like granola bars, yogurt and bread. Red wine adds an edge to your mood, as well as margarine and even (yikes!) too much coffee. Instead, choose all-natural sweeteners like raw honey and real maple syrup. Limit your alcohol consumption, and instead of red wine, opt for white. Better yet, replace alcohol with a probiotic-rich, fermented drink like kombucha. Instead of coffee, how about a cup of anti-aging green tea?

Compassionate, artistic and intuitive Pisces. So selfless, and always ready to give a helping hand without expecting anything in return. But sometimes life can just bring you down. So, avoid foods that can make you sad and choose foods that lift your spirit instead.

Avoid refined sugar and artificial sweeteners. And stay away from refined carbs like white bread and white pasta, which have about the same effect on you as eating a bowl of candy. You may also want to avoid anything fast fried in hydrogenated oils like chicken fingers, cheese sticks and French fries. Instead, choose healthy all-natural sweeteners like raw honey and pure maple syrup. Choose whole grains, beans and coconut. Instead of fried foods, choose salmon and rainbow trout.

Oh, confident and courageous Aries, always looking for that next mountain to climb — and a fast meal. But that may leave you burned-out and impatient, which means you indulge in calorie-rich processed foods on the go.

Avoid high-salt foods that raise your blood pressure and cause inflammation. You may also want to limit your spicy food, red meat and alcohol, which can over-stimulate your system. Instead, choose healthy snacks you can grab on-the-go, like Greek yogurt, mixed nut packs, high energy nutrition bars and hard-boiled eggs. Choose brown rice, lentils, walnuts and high-iron greens like spinach.

Taurus, you’re reliable, responsible and highly sensual. So, it’s not surprising that your tactile nature considers taste to be one of the most important of all senses. But that could mean drowning your emotions in large quantities of food.

Avoid overindulging in creamy, rich desserts. In fact, limit starchy, high-fat and sugary foods to avoid packing on the pounds. Instead, replace high-sugar desserts with fruit, and salty snacks with veggie sticks. Also, drink plenty of water to keep your system flushed.

Gemini, you’re expressive, quick-witted, a fast-learner and extremely curious. But that often leaves you restless and forgetting a meal or two. In fact, a stimulating conversation during a meal is often more important than the food itself.

Avoid refined carbs like white pasta, white bread and doughnuts. Limit your caffeine and diet soda intake as well. Avoid foods loaded with high fructose corn syrup, which can also cause anxiety-inducing spikes and dips in your blood sugar. Instead, keep a variety of healthy snacks on hand, in case you forget to actually sit down for lunch. And choose foods that will calm your anxious nerves like asparagus, avocado, blueberries, almonds, salmon, oatmeal and even a warm glass of milk before bed.

Highly loyal, sympathetic and emotional Cancer. Your deeply intuitive nature leaves you moody, pessimistic, a little suspicious and often nervous. That means controlling your emotions with food. Overeating is often the result of your nervous stomach.

Cool it on the wine and alcohol, which you don’t generally tolerate that well. Limit starchy, sugary and salty foods that leave you bloated. Avoid hot sauce, too! Instead, choose foods high in calcium, like cheese and tomatoes, to reduce stomach inflammation. And load up on your fresh veggies, fruit and lean protein.

Leo, you’re a natural leader and often difficult to resist. But your stubborn nature can leave you a tad inflexible. That inflexibility could wreak havoc on your diet. And when your vitamin intake is compromised, it could lead to problems with your heart.

Avoid highly processed foods and sweetened beverages like soft drinks, energy drinks, fruit drinks and flavored coffees. Instead, stick to a healthy and balanced diet that includes whole fruits and vegetables, whole grains and a variety of lean proteins. Stay well hydrated. But when water is not available, stick to anti-aging and heart healthy green teas.

Virgo, you’re loyal, kind and hardworking. But all work and no play makes Virgos a bit dull — and it can also lead to digestive upset. This is why Virgos often suffer from indigestion, gas, ulcers and more.

Avoid spicy, highly seasoned foods, rich sauces and gravies. Fried foods and (your favorite) chocolate are also not your friend. Instead, choose foods that are easy to digest like green leafy vegetables, whole-grain bread, oats and almonds. Go for melons, apples, pears and papaya to ease the stomach.

Libra, you’re diplomatic, gracious, fair-minded and extremely social. But your indecisiveness could mean turning every meal into a feast and a five-course meal. When preparing a meal, you’ll often pay more attention to the appearance rather than the substance of the food.

Go easy on chocolates and sweets. Avoid carbonated drinks, overly-rich foods and too much alcohol. Beef and pork don’t sit well with you either. Instead, choose broiled fish, seafood and poultry. Enjoy plenty of fresh veggies, fruit and lemon water to flush your system.

Scorpio, you make a great leader. You’re brave, passionate and a true friend. Scorpios understand the secrets of the universe, which could age them a little faster than others. So, it’s important to consume anti-aging foods that supplement the skin.

Scorpio, alcohol is not your friend, and not kind to your skin. So, go easy on the booze. Avoid high sugar sodas, salt and high-fructose sweeteners like agave syrup. Stay away from refined carbs like white bread and white pasta, along with large meals. Include foods in your diet like asparagus, cauliflower, radishes, onions and tomatoes. Indulge in figs, black cherries and coconut. Concentrate on a diet high in protein, most importantly fish and seafood.

Sagittarius, you’re generous, outdoorsy and have a great sense of humor. You also love to party, which could wreak havoc on the liver. Your appetite for life makes you a bit greedy when it comes to food. However, you seem to move between gluttony and starvation.

Avoid fats, gravies, cream, butter, candy and chocolate, and go easy on alcoholic beverages. Choose a high protein diet with broiled chicken and fish. And include raw salads loaded up with green peppers and tomatoes. Choose whole wheat and brown rice, and fruits such as plums, cherries and oranges.

Capricorn, you’re responsible, disciplined and gracious. You’re also traditional at heart, so you love traditional homemade foods. But sometimes you do things in excess, and that could include too much salt or alcohol.

Try to change things up a bit with a variety of vegetables, fruits, meat and fish. Avoid salty snacks, refined sugar and highly-seasoned, spicy food. Add spinach, figs, almonds and walnuts to your salad. And if you haven’t eaten dandelion greens yet, give them a try.