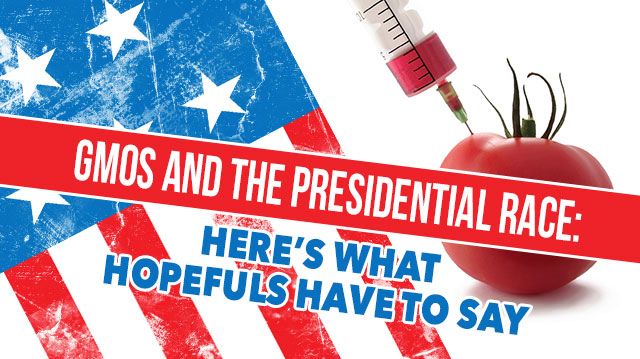 Genetically-modified organisms (GMOs) are the subject of much debate with politicians and individual citizens. Scientists have tried to determine if GMOs are safe for our consumption, and literally hundreds of researchers, physicians and experts can’t come to a consensus on the subject.

While GMOs tend to take a backseat to “bigger” issues, we’d like to see GMO labeling on a national level so that we can make informed decisions about the food we eat. We make no secret of our stance on GMOs around here, but have you ever wondered what your favorite presidential hopeful has to say on the subject? From Jeb Bush to Donald Trump, Bernie Sanders to Hillary Clinton, here’s what the front-runners think about GMOs.

Former Florida Governor Jeb Bush is part of the Bush legacy, a fact that voters seem to either love or hate. Well, we hate Bush’s attitude about GMOs. It’s one part dismissive and one part glorifying. “An American farmer in 1950 produced one unit of agricultural products, and today, they produce 15 times more,” Bush said at the Iowa AG Summit this year. “The GMO effort to increase yields, to deal with droughts, to deal with disease, is an element of that. It creates economic opportunity and prosperity.” According to Bush, GMO labeling is “a solution to a problem that doesn’t exist.”

Oddly enough, Bush is all for country-of-origin labels, because he wants to know from whence the avocados for his Sunday Funday guacamole come. Ironically, other countries don’t want our corn because it’s genetically modified. As NPR has reported, beginning in the autumn of 2013, China started rejecting entire shiploads of corn when a GMO variety developed by Syngenta made its way into shipments. By February 2014, U.S. corn exports to China came to a virtual standstill. The people who lost out? The farmers that Bush claims are prospering from GMO products.

For a neuroscientist, you’d think that Dr. Ben Carson would like science, or default to it, at very least. So is his complete lack of opinion — at least his publicized opinion — about GMOs a sign that he’s waiting to see what science has to say on the subject? We’re not sure. The fact of the matter is, Dr. Carson’s website doesn’t even list the environment, energy or GMOs as issues worth championing. In fact, UC Berkeley School of Law Professor Dan Farber points out that finding a Carson quote about the environment is like looking for the proverbial needle in a haystack, so it goes without saying that a quote about GMOs is nonexistent.

When Carson does say something about the environment, there’s a subtle implication that he doesn’t know if global warming is real, although Carson has said, “Protecting the environment is neither a Democratic nor a Republican position, but rather it should be a logical position for capitalists and socialists, because everyone should be looking out for the interests of future generations and trying to protect our own health as well.” Does this mean that maybe there’s hope? We’re not holding our breath.

Former Secretary of State Hillary Clinton may be winning people over with some of her other policies, but her take on GMOs leaves something to be desired. “I stand in favor of using seeds and products that have a proven track record,” said Clinton when she addressed the Biotechnology Industry Organization (BIO) convention in 2014. “There’s a big gap between what the facts are and what perceptions are,” she said. Well, this is certainly true, but we think Mrs. Clinton is a little confused as to which is which. The facts aren’t conclusive that GMOs are healthy, and seeds, like those used for GMO corn, don’t have a proven track record; they’ve only been in use since the 1990s. We’re not surprised, though: Clinton has shown time and again that she’s not a friend to those of us who favor GMO labeling.

When it comes to GMOs, Senator Cruz has called concerns over adverse effects “hysteria” and believes — like Jeb Bush — that we should celebrate the positive impact that GMOs have had in the U.S. and across the globe. As another speaker at the Iowa AG Summit, Cruz claimed that politicians are “blowing smoke” in Washington over GMOs and people who want to buy organic instead of GMOs are welcome to do so. “People who decide that is what they want, they can pay for it already, but we shouldn’t let anti-science zealotry shut down the ability to produce low-cost quality food for billions across the globe,” he said at the summit.

Cruz is also a climate change denier, so it’s not surprising that he’s unconcerned about our manipulation of plants and animals. According to Cruz, “The radical left loves attacking people as anti-science when anyone dares question their computer models on global warming. They scream, ‘you’re anti-science,’ when someone points out, for example, that in the last 17 years, satellite data shows there’s been no warming whatsoever.” Excuse us?

Businesswoman Carly Fiorina catches a lot of flak for her time at HP, and her attitude concerning GMOs gains her a lot of criticism from health advocates. In an appearance on RFD-TV’s program Rural Town Hall, hosted by Mark Oppold, Fiorina made her thoughts on GMOs clear. “Well, GMOs are safe. GMOs are safe, and, you know, you have Nobel Prize winners here from Iowa who dwarf wheat,” she said. Well, we’re of the opinion that just because you can genetically modify food doesn’t mean you should. According to Fiorina, GMOs have “fed millions and millions and millions of people,” and GMO labeling is unnecessary. “What’s safe is safe,” she said. “Let’s not ignore the science, GMOs are safe. The scientific evidence is clear.” Fiorina claims that government “crushes innovation,” and as such, labeling GMOs would hamper our pursuit of “pushing the frontiers of science.”

Former Maryland Governor Martin O’Malley certainly receives less press coverage than Clinton and Sanders, and it seems that lack of press coverage extends to his position on GMOs. It’s virtually impossible to determine what his opinions are on the subject. However, our guess is he’s in favor of GMO labeling. A tweet from the former governor on October 16, 2015 gives us some clues. “We held tobacco companies responsible for lying about cancer. Let’s do the same for oil companies & climate change.” Does this mean he’d go after companies like Monsanto that are producing GMO foods? Possibly, but the likelihood of us finding out this time around is slim. O’Malley consistently trails Clinton and Sanders in the polls.

Florida Senator Marco Rubio voted against Senator Bernie Sanders’ proposed amendment to allow labeling of all foods, beverages and other edible products with genetically-modified ingredients, otherwise known as the Genetically Engineered Food Right-to-Know Act. He also stated, “I do not believe that human activity is causing these dramatic changes to our climate the way these scientists are portraying it.” So, we can only guess that he believes that we can change food any way we’d like without causing harm to the environment or ourselves. 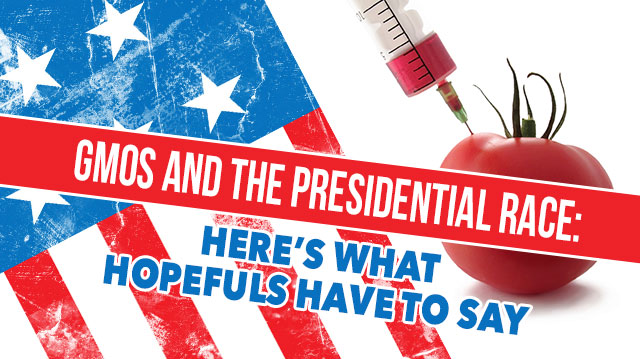 Senator Bernie Sanders of Vermont is the only major presidential hopeful that supports GMO labeling. “All over this country, people are becoming more conscious about the foods they are eating and the foods they are serving to their kids, and this is certainly true for genetically engineered foods,” Sanders said in a press release. “I believe that when a mother goes to the store and purchases food for her child, she has the right to know what she is feeding her child.” Vermont was the first state to pass a GMO labeling law, and Sanders was the senator to introduce the Genetically Engineered Food Right-to-Know Act on the national scale. When it went for a vote in the Senate, the act was defeated 71 to 27, yet Sanders still advocates GMO labeling.

We haven’t gone easy on businessman and celebrity Donald Trump around here, and GMO labeling is not the place to start. After a joking tweet in response to an Iowa voter — where 94 percent of the corn and 97 percent of the soybeans grown are genetically modified — even loudmouth Trump backed off of Monsanto. His tweet didn’t make much sense to boot.

When Carson took the lead in Iowa, Trump retweeted one of his followers: “@mygreenhippo #BenCarson is now leading in the #polls in #Iowa. Too much #Monsanto in the #corn creates issues in the brain? #Trump #GOP.” It’s not unlike Trump to say or write something that’s confusing and only semi-coherent, so we’re not entirely sure what message he’s attempting to convey. We do know that Trump eats organic food himself, but so do a lot of politicians who are against GMO labeling, so who knows what his stance is. Perhaps we’ll get a strangely-worded Facebook post that will clear it up a little?

Clearly the overwhelming attitude from presidential hopefuls is that GMOs are fine and shouldn’t be labeled. While this is discouraging, it looks like this round goes to Bernie Sanders.

What do you think of each candidate’s stance on GMOs?