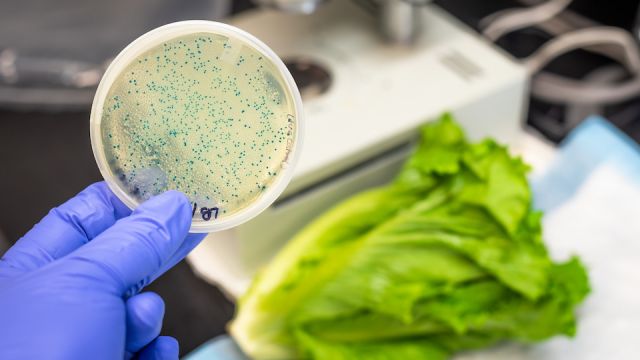 Here we are again, reeling in the wake of another Romaine lettuce recall days before Thanksgiving. Like last year, this recall is related to E. Coli in lettuce and encompasses a massive quantity of plain Romaine lettuce and packaged salads throughout the country. Read on for some details about this problematic recall and ways to protect yourself.

On November 22, federal health officials issued a nationwide recall of all Romaine lettuce products harvested in the Salinas growing area of California. As far as the media is aware, the pervasive E. coli bacteria has sickened 40 people in 16 states, with 28 of them requiring hospitalization, according to the U.S. Centers for Disease Control and Prevention.

The CDC is urging consumers to throw out any Romaine lettuce with Salinas California listed as the growing region and sanitize any surfaces it may have touched. If there is no growing location listed on your lettuce or lettuce product, health departments are recommending that you take extreme caution and throw away these as well.

The recalled salad products have “Use By” dates ranging from Oct. 29, 2019, to Nov. 1, 2019, according to the CDC, and include the number “EST. 18502B” inside the USDA inspection mark. Even if you don’t see these indicators, however, it is a good idea to play it safe and dispose of any romaine in your refrigerator.

Why is it dangerous?

E. coli is a broad term for gut bacteria. Believe it or not, you may actually have some E. coli living in your stomach right now. The problem is that a specific strain of E. coli called O157:H7 — can cause bloody diarrhea, stomach cramps, vomiting, and kidney failure. In severe cases, this gut bacteria poisoning can even lead to death. As with most bacterial issues, it is most dangerous for elderly adults and children, and other people with weakened immune systems.

Why does this happen?

Though it’s not fun to think about, since E. coli is a gut bacteria, it travels through feces. That means contaminated lettuce must have come into contact with some form of fecal matter. Whether the lettuce was contaminated in the field from a nearby livestock farm or it picked up the bacteria from contaminated water, farmworkers, equipment with manure on it, or other contact with fecal matter, this bacteria will survive all the way to your table.

If you feel like history is repeating itself, then you are absolutely right. Over the past few years, hundreds of thousands of pounds of Romaine lettuce been recalled in an attempt to halt this pervasive bacteria, with numerous outbreaks still plaguing the country every year. Before you blame Romaine lettuce, however, keep in mind that this is one of the most commonly consumed vegetables in the country.

When you have something that affects so many people, it is easier to trace it and issue warnings about the outbreak. That’s not to say that other vegetables don’t get contaminated, just that they don’t receive as much media coverage and publicity because the outbreaks usually aren’t as widespread.

What to do if you get sick

If you ate potentially contaminated lettuce before you saw the recall, don’t panic. You aren’t guaranteed to get sick. If you do, symptoms will usually set in around three or four days later, and though you will be miserable for a few days, a healthy person usually doesn’t have much to worry about. Stay hydrated, rest, and go to the emergency room as soon as possible if your symptoms worsen. It can take anywhere from one to eight days for the illness to run its course.

How to protect yourself

Other than paying attention to any news of food recalls and throwing out any affected products, be sure to wash fresh produce thoroughly before eating. This won’t kill bacteria if the lettuce is contaminated, but will help remove any lingering pesticide residue. And though buying organic is a great way to avoid this, organic lettuce is just as susceptible to E. coli as non-organic lettuce.

If you have space and the inclination, consider setting up a cold frame or greenhouse to grow your own lettuce during the cold months. That way, you know exactly where it’s coming from and can avoid human transmitted E. coli contamination.

Shop locally whenever you can. Support farmers in your area and eat produce that doesn’t have to travel thousands of miles to reach your table. This limits the number of people that come into contact with the product, which decreases the risk of contamination, and as long as the farmers are practicing safe growing, you are better off purchasing locally sourced leafy greens.