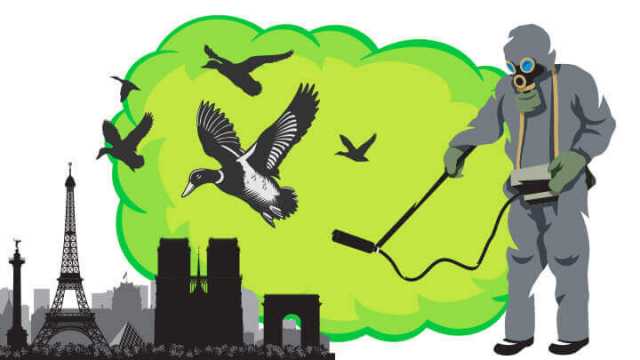 France is currently in the process of culling 800,00 birds in order to prevent the spread of H5N8. Workers, dressed in head-to-toe protective suits, face shields and gas masks, are picking up ducks on farms and putting them in metal containers. Carbon dioxide is then piped into the containers and the birds are killed within seconds.

At one farm in the village of Latreille, in the heart of the duck and geese-rearing part of France, 8,000 ducks were culled in just a few hours. The total amount of birds being killed — 800,000 — are just a small proportion of the 18 million birds in the southeast of France. And authorities in the Czech Republic also ordered the culling of chickens and ducks, as reports of bird flu spread across Europe.

There have been 95 reported outbreaks of the H5N8 bird flu virus in France. The country’s agriculture ministry said the virus has been spreading over the past month and needs to be contained. If the currently infected ducks aren’t killed, more may need to be culled in the future.

Bird flu is most dangerous to the birds themselves. That is, this measure is aimed at protecting the ducks and the farmers who depend on them for their livelihood. H5N8 has never been found in humans and can’t be transmitted through food.

Other strains of bird flu found in Asia

Other strains of bird flu though have been found in South Korea and Japan in recent weeks — and these have infected humans. The latest strain of bird flu resulted in the culling of millions of birds. In total, due to all the different strains of bird flu, 250 million birds have been killed globally in attempts to stop the spread of the virus.

The H5N1 strain of bird blue killed close to 60 percent of the humans who were infected by it, according to the World Health Organization. However, it’s important to note that the flu doesn’t spread via human-to-human contact. Talk of a future pandemic is likely exaggerated.

Meanwhile, the H5N8 strain affecting ducks in France has been spreading from farm animals to wild migratory birds and killing them – though the rate at which this is happening is minimal. The greater risk is the spread to other farm birds.

A long-term concern for bird flu — and particularly the H5N1 strain — is that it could eventually adapt into a form that is spread between humans, causing a global outbreak among people. But, while this is something to consider and prevent, it’s not something to seriously worry about yet.

Are there alternatives to culling?

This isn’t an issue of the ethics of killing poultry. The ducks in France affected by bird flu were being raised to become foie gras anyway. They would have been slaughtered eventually. So while many people do object to using animals for meat, the general question of killing farm animals is a separate issue.

After all, the U.S. slaughters at least 50.9 million animals every day for human consumption. In 2008, the following number of animals were slaughtered in the US:

In this case, the question is this: is culling an efficient solution to the bird flu spreading across Europe or are there alternatives?

Culling birds to prevent the virus spreading to other farms is a common practice. However, France’s Ministry of Agriculture does say that some farms are exempt from the culling. In those examples, birds are confined and raised through the complete production process — from ducklings to the end product. The risk of the virus spreading is low there. 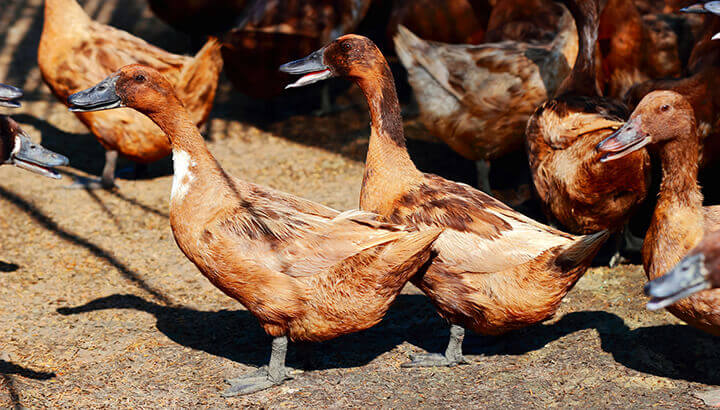 While many of France’s culled ducks are free range, it is industrial farming methods which are facilitating the spread of bird flu. Areas densely populated by livestock are more vulnerable. Factors that also increase vulnerability include open water bodies, movement of animals, contamination of lorries, feed and other supplies, hygiene on farms, the processing chain and markets.

The practice of slaughtering chickens at retail outlets without veterinary inspection increases the likelihood of human infection from some strains. Further, climate change is altering the distribution and abundance of insect vectors — those that carry and transmit infectious pathogens to other living organisms.

In the short term, alternatives to culling depend on the particular situation. They include quarantine measures and vaccinations. Surveillance can help ensure earlier detection and fewer birds being affected, but the FAO argues that often culling is the most “humane” treatment.

Veterinary scientist Albert Osterhaus argues that the scale of the issue means that vaccinations and culling should both be used, that “one does not work without the other.”

France has plans to carry out preventative vaccinations on millions of birds. But in the meantime, there are those that are already infected and there is also the reality that the vaccines aren’t 100 percent effective. Vaccines can prevent animals from feeling ill, but a low number of viruses will still replicate and spread.